After a meditative weekend in Krakow, Sommer and I took the train from Poland to the Czech Republic to spend six nights in the historic city of Prague. We absolutely fell in love with Prague (and the Czech Republic as a whole) but more on that soon! :) While we were in Prague we took a couple of day trips outside the city to experience the Czech countryside. Our first stop was Kutna Hora, home of the infamous Bone Church!

Please note that the photos below contain actual human skeletons. Proceed with caution! 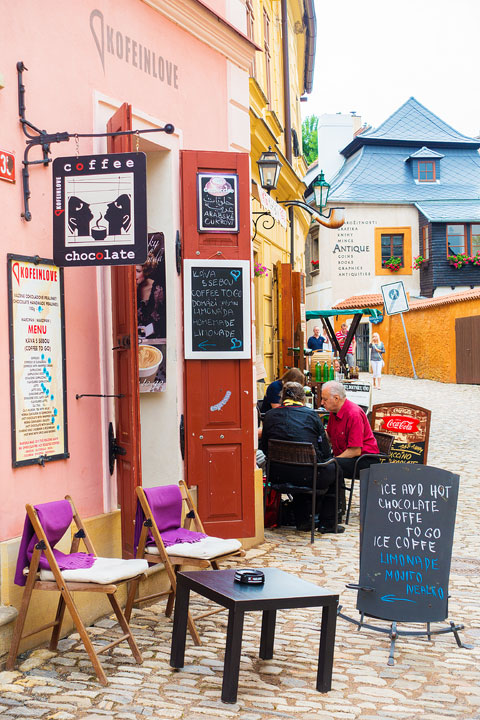 Kutna Hora is a city located in the Bohemian region of the Czech Republic.

It’s most known for being the home to the Sedlec Ossuary, a chapel adorned with thousands of human skeletons. 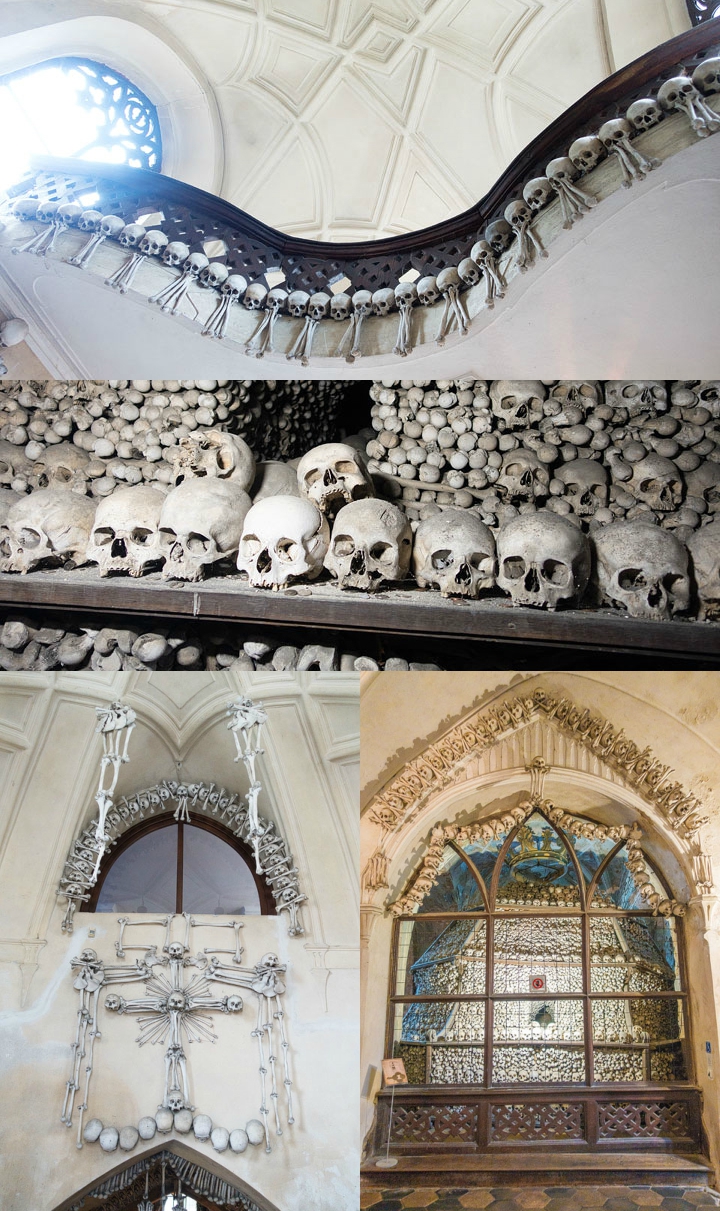 The chapel is estimated to contain the skeletons of 40,000 to 70,000 people. Their bones have been artistically arranged to form decorations and furnishings for the chapel. 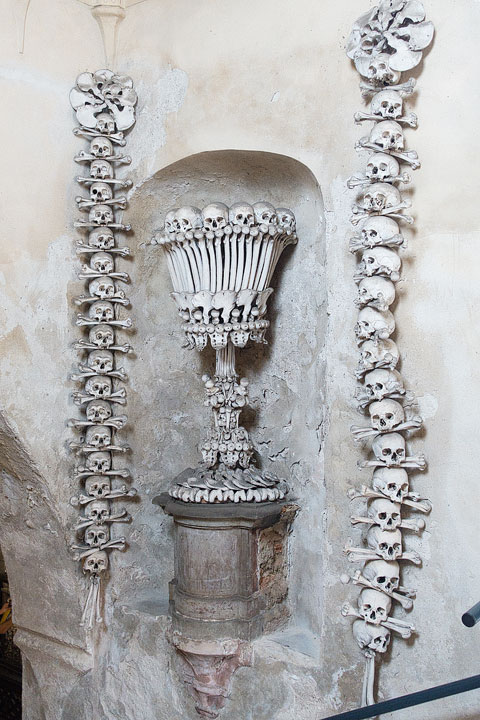 Nicknamed “The Bone Church,” it is one of the most visited tourist attractions in the Czech Republic, attracting over 200,000 visitors annually. 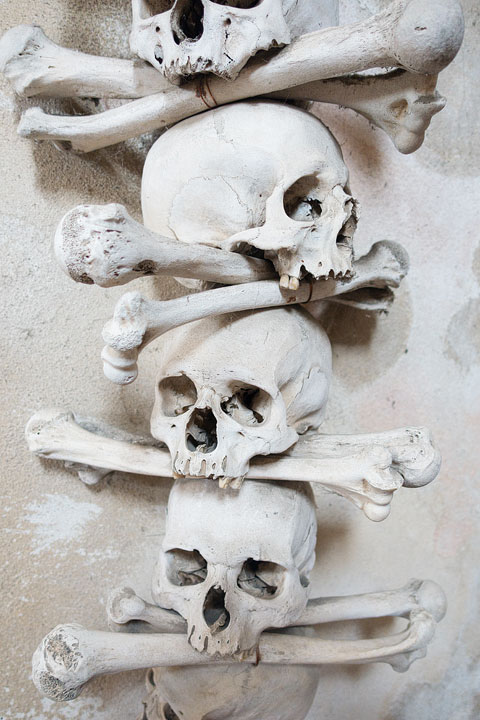 Why was a church made of bones constructed? And where did the bones come from?

Here’s what we know: 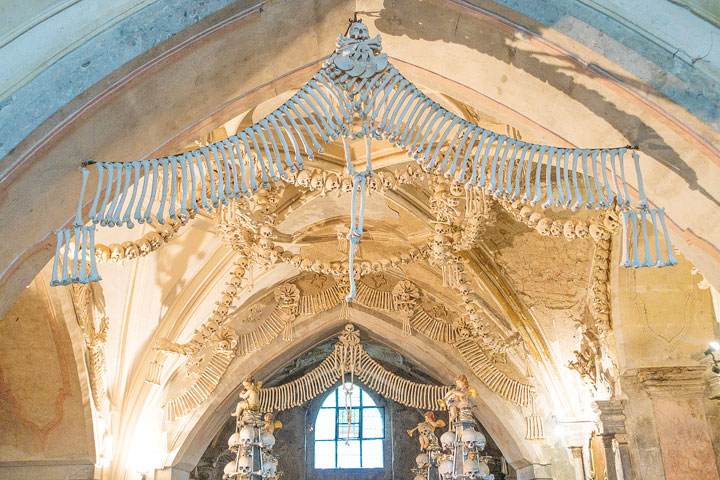 Over 700 years ago, in 1278, the head of the Sedlec monastery went on a holy pilgrimage to Jerusalem. He returned with a small amount of earth he took from the hill where Jesus was crucified. 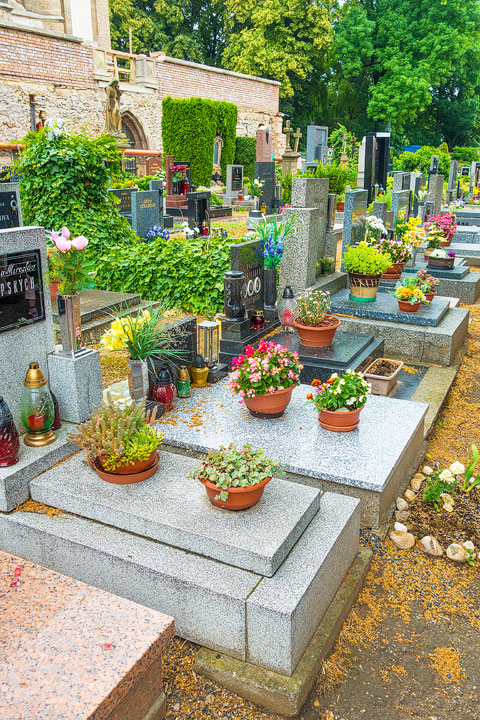 When he returned, he sprinkled the dirt over the abbey cemetery. 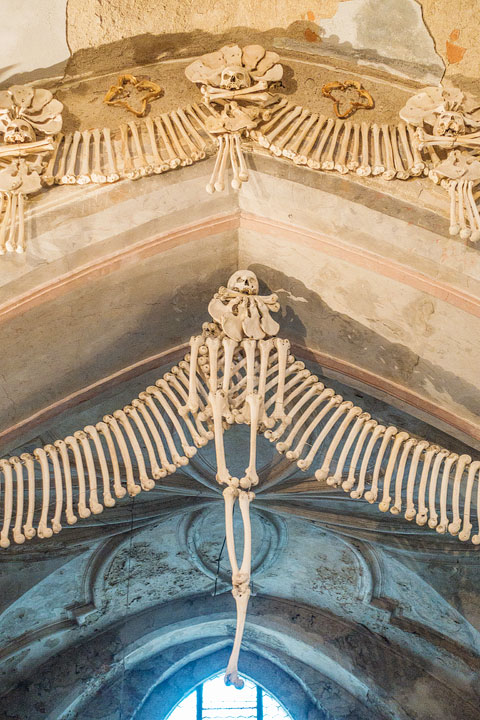 Word of this holy act quickly spread and the Sedlec cemetery became a desirable burial site all throughout central Europe. 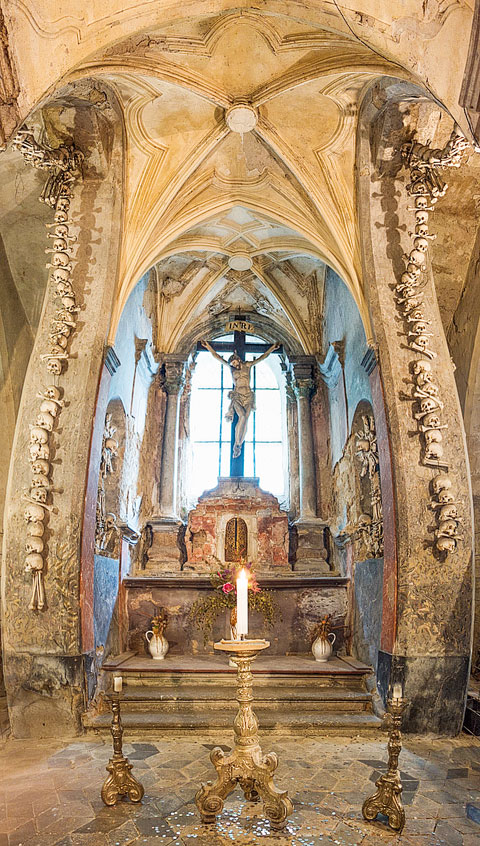 In the mid-1300s, during the height of the Black Death, thousands of people were buried in the Sedlec cemetery. 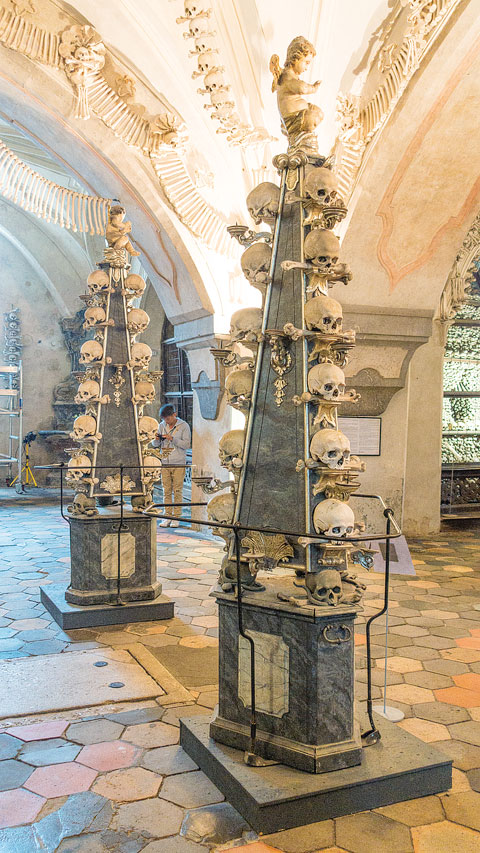 Around 1400, a Gothic church was built in the center of the cemetery with an underground chapel to be used as memorial site for the mass graves unearthed during construction of the chapel. 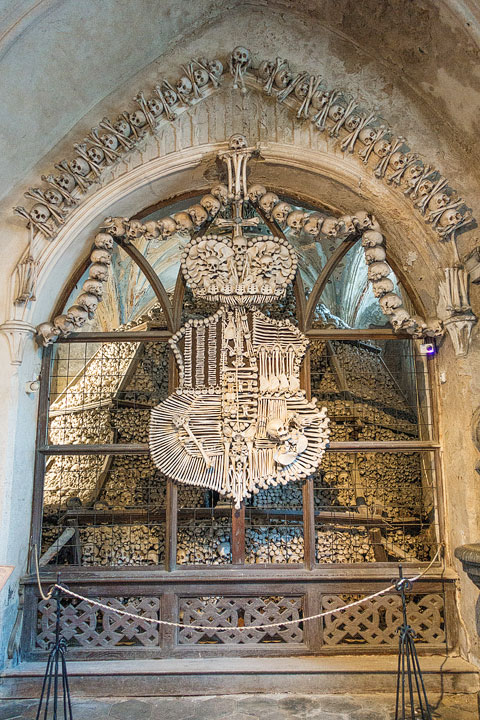 During construction, the thousands of exhumed bones were simply stacked in the middle of the chapel. 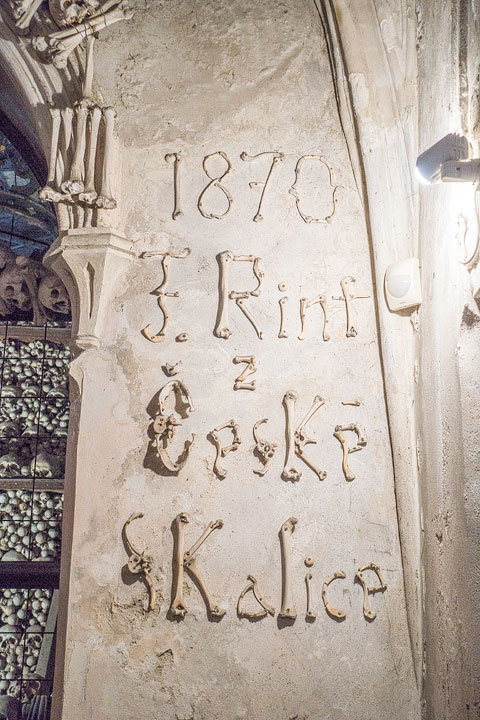 It wasn’t until 1870 when artist František Rint was hired to put the bones in order, resulting in the chapel you see today. 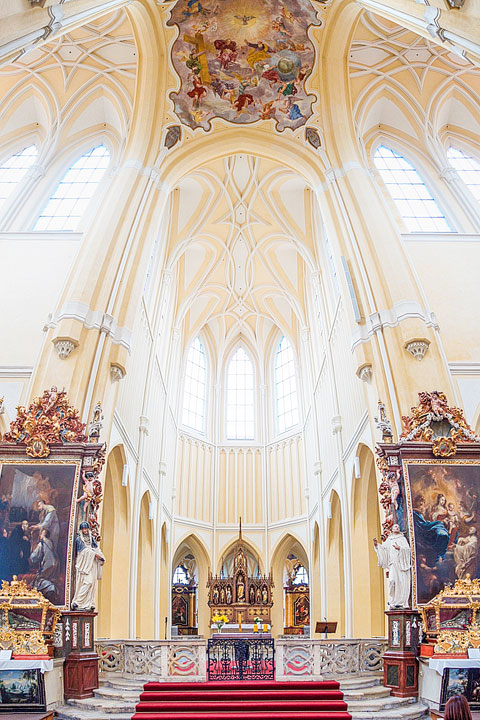 But there’s more to Kutna Hora than just the Bone Church. 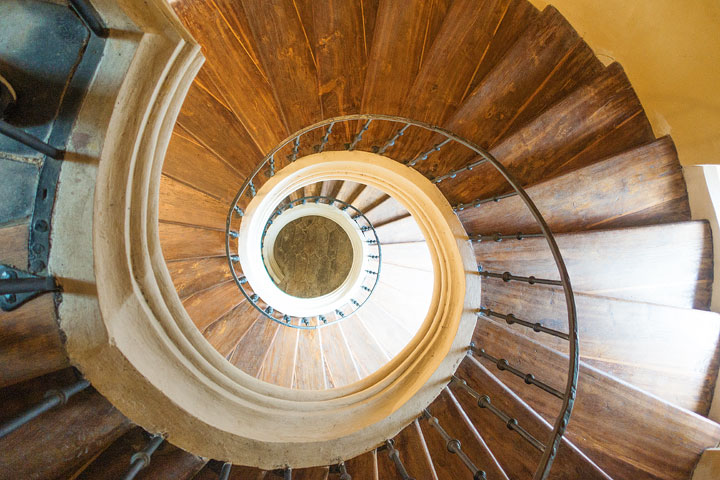 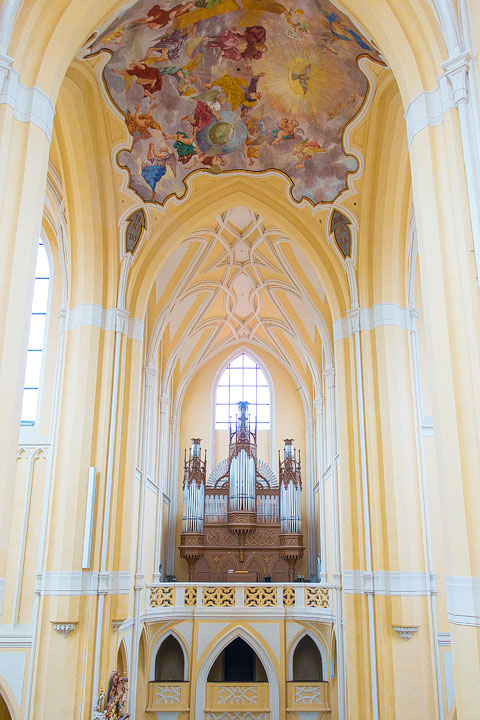 This is The Church of Our Lady. 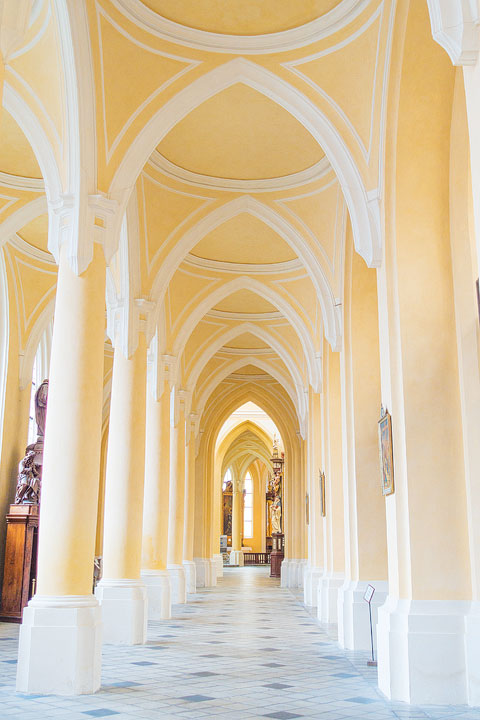 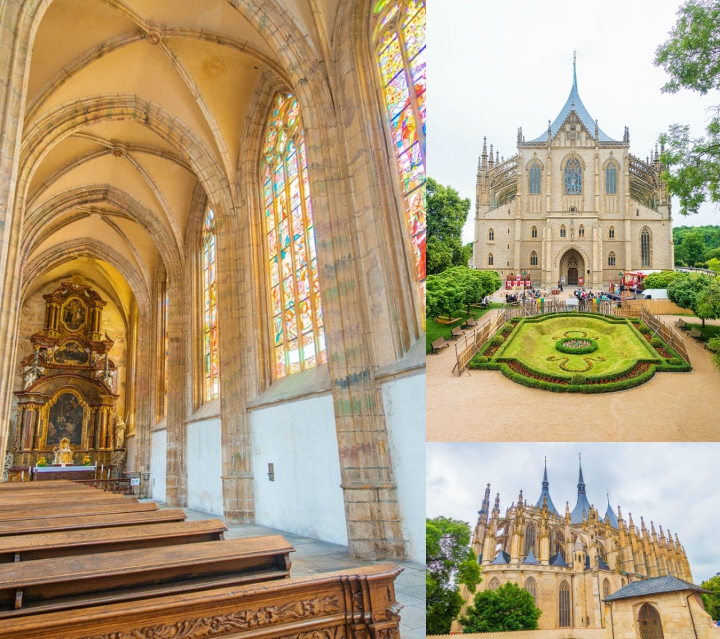 Another striking church in Kutna Hora is Saint Barbara’s Church. 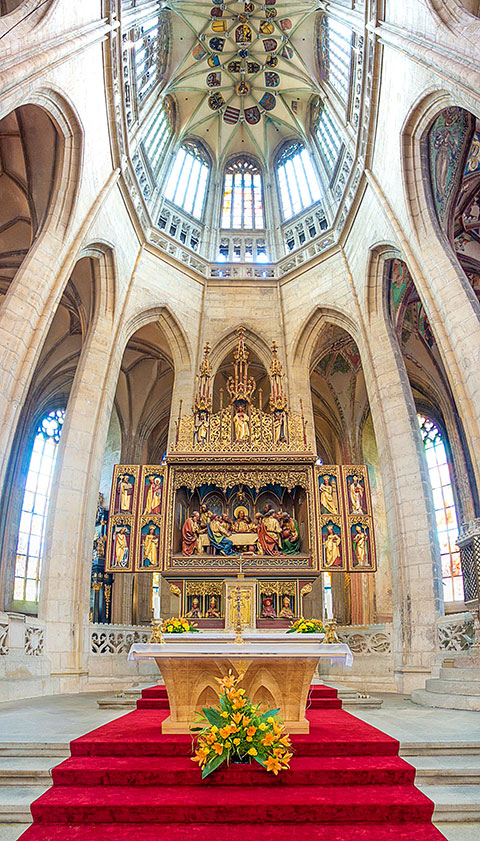 Saint Barbara’s Church is a Roman Catholic church, and is sometimes referred to as the Cathedral of Saint Barbara. 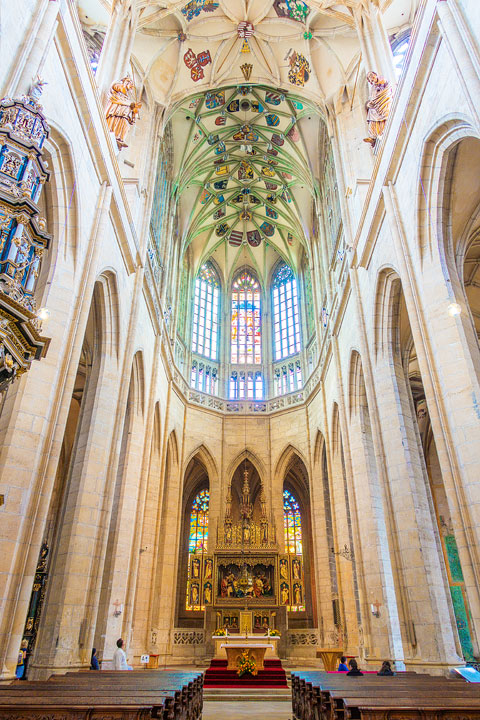 Saint Barbara is the patron saint of miners, which was highly fitting for Kutna Hora, a prominent silver mining town. 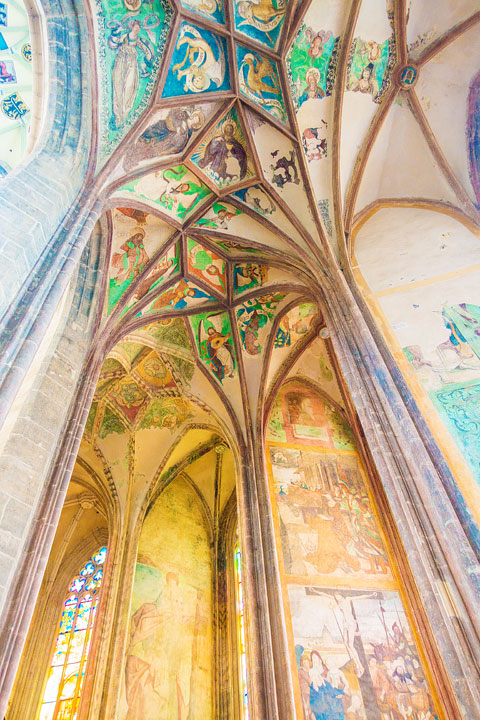 In fact, the Royal Mint was located in Kutna Hora, where they made silver coins from the silver they mined. 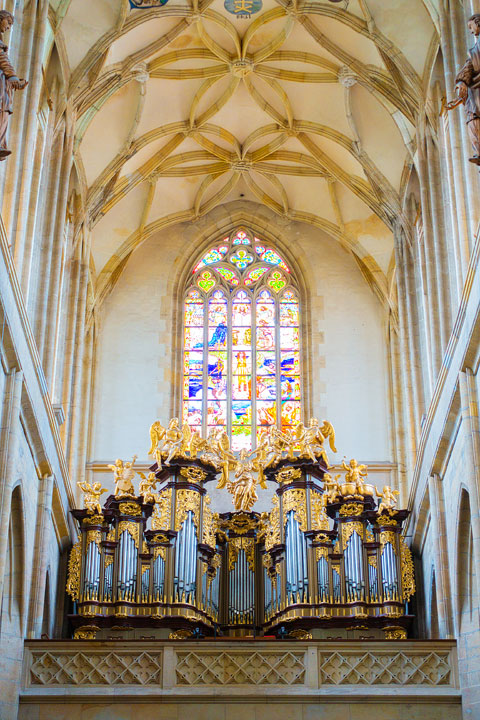 King Wenceslas would visit the mines often and stay in Kutna Hora for his visits. 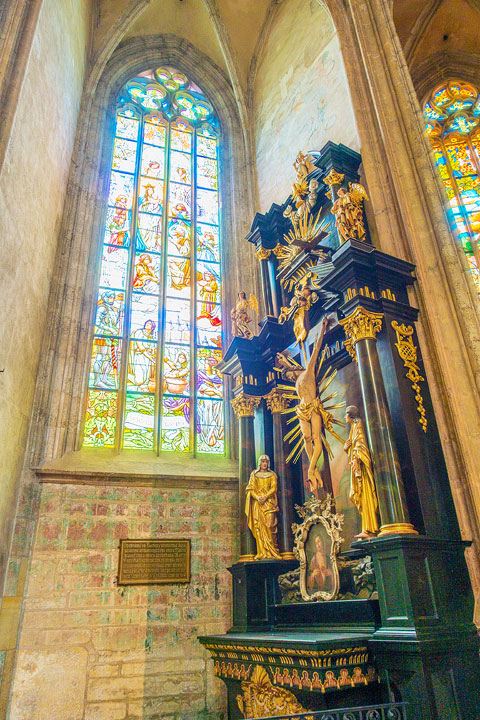 There was other mining in Kutna Hora as well. 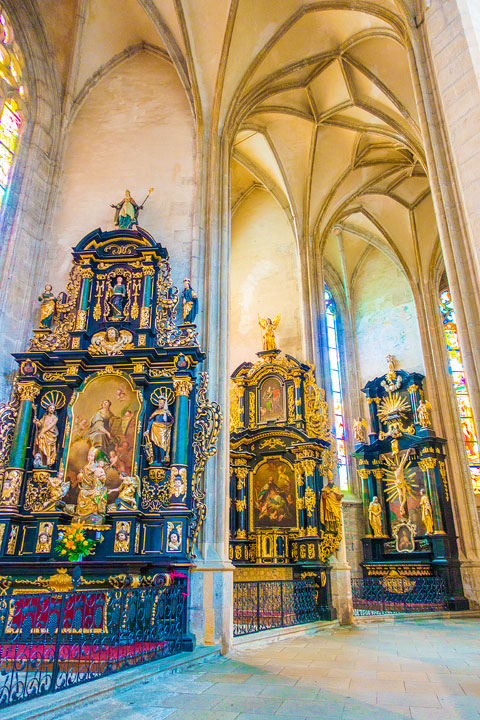 The church was built from sandstone that had been mined in the nearby quarries. 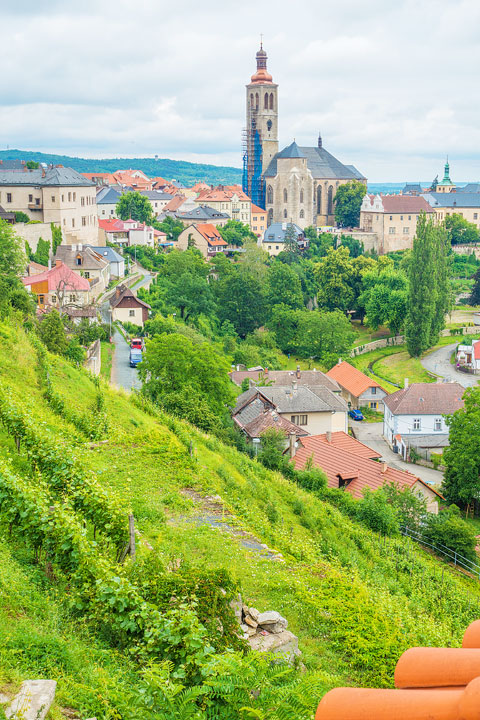 We happened to arrive in Kutna Hora on the day of a Gothic celebration that happens only once a year. 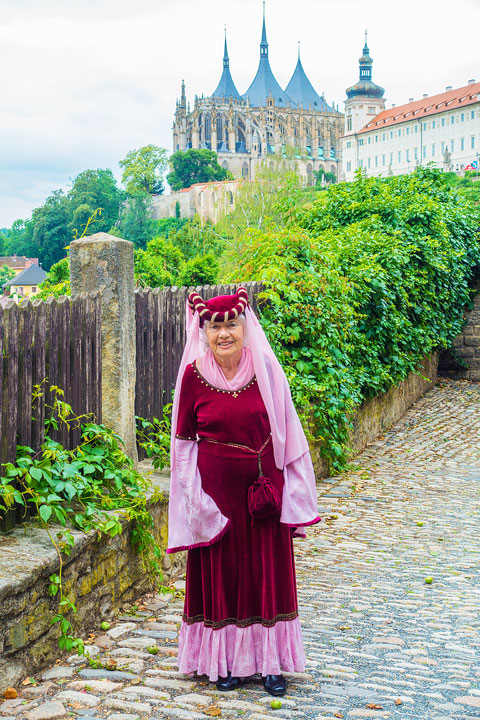 People dress up in medieval costumes, there are fun parades, a historical fair, and a feast of traditional street food! 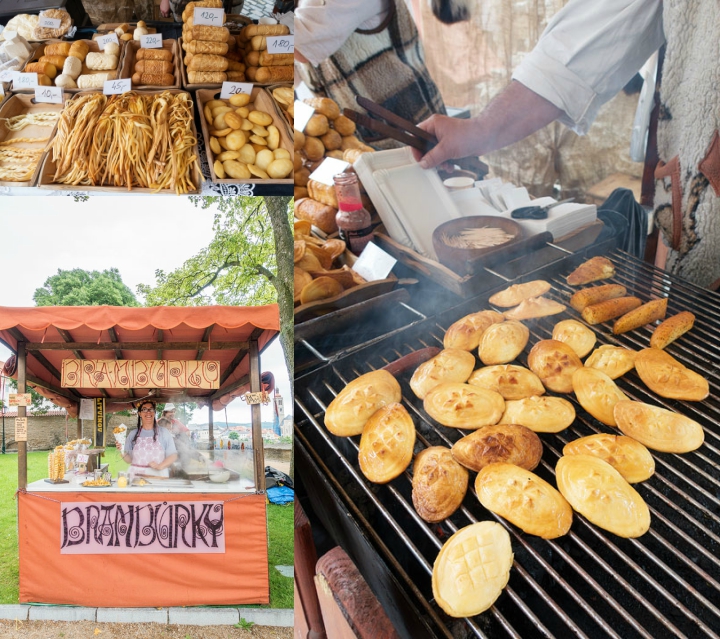 We were in heaven going to every stand and taste-testing everything! 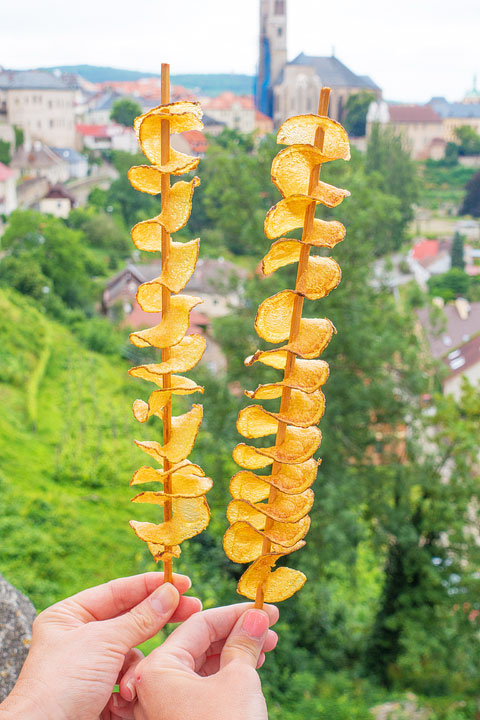 Spiral chips on a stick! 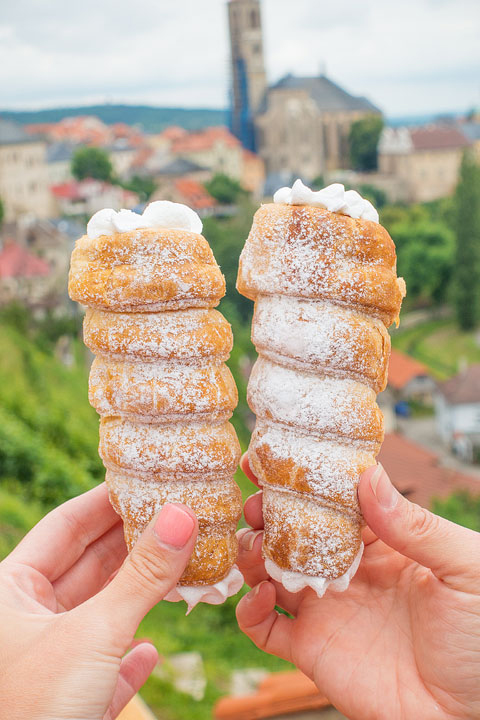 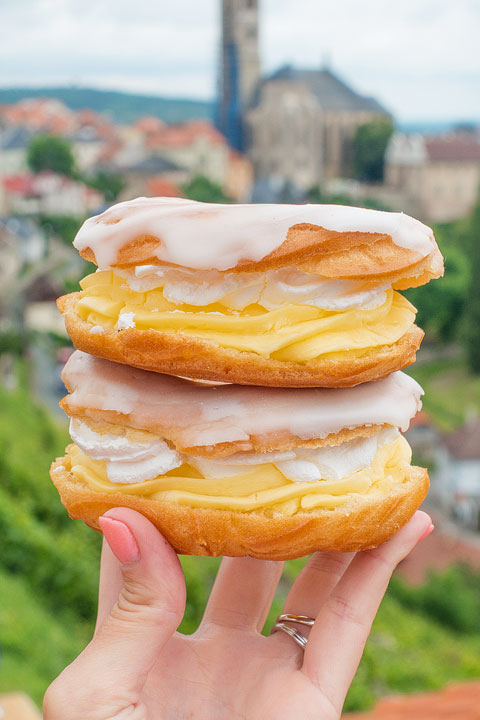 These donuts were incredible!! 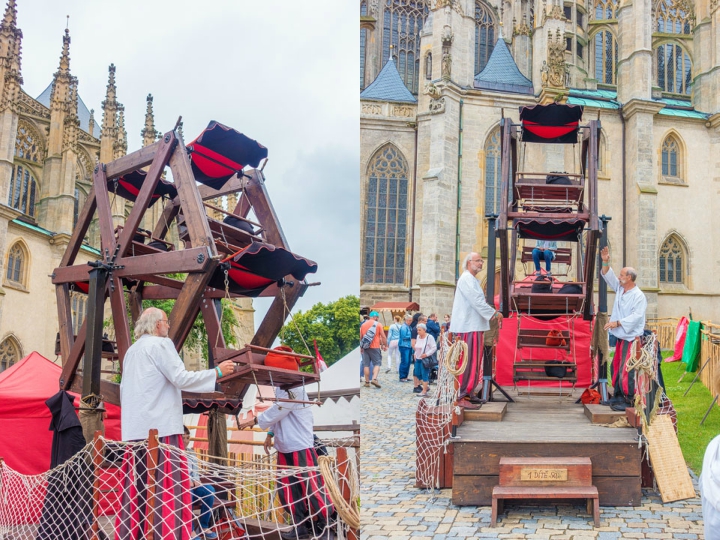 Such a fun festival. How cute is this mini hand-turned ferris wheel?? 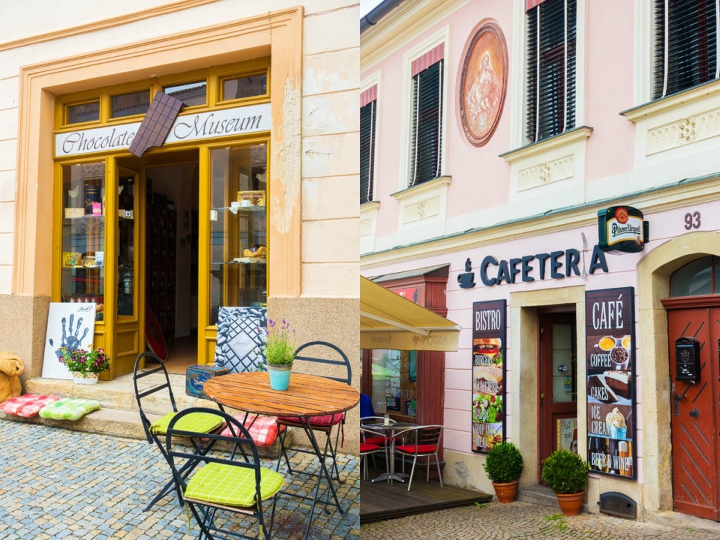 If you are looking for a charming day trip outside of Prague, I highly recommend Kutna Hora! Four hours here is plenty of time to cover everything.

Check out czechtourism.com for more ideas for fun activities, charming towns, and day trips in the Czech Republic.

Until next time! :) xoxo

We love to travel and to eat! Here we share our favorite quick and easy recipes, plus travel tips and guides for our favorite places around the world. Meet our Boston Terriers. Take a tour of our house. If you have any questions about what camera I use or how I edit my photos, check out my photography tutorials.