Visiting Eastern State Penitentiary is one of the most interesting things to do in Philadelphia. Here’s what it’s really like to visit this infamous haunted prison! 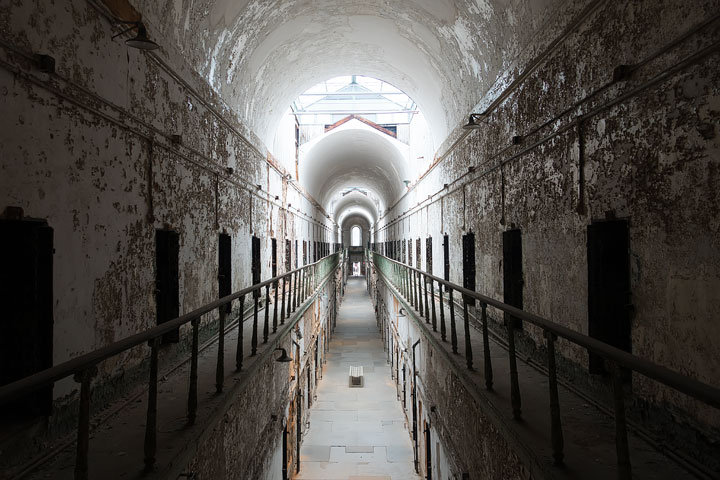 Eastern State Penitentiary is a former prison in Philadelphia. 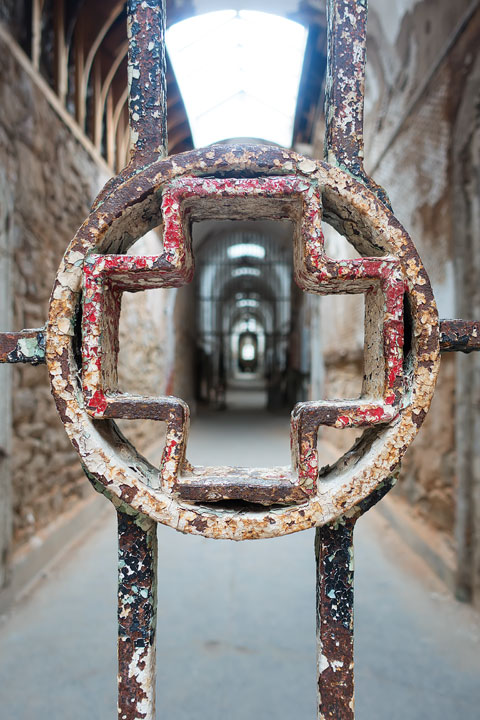 Was Al Capone at the Eastern State Penitentiary?

Yes! Notorious criminals such as Al Capone were once imprisoned here. You see a picture of his cell below! 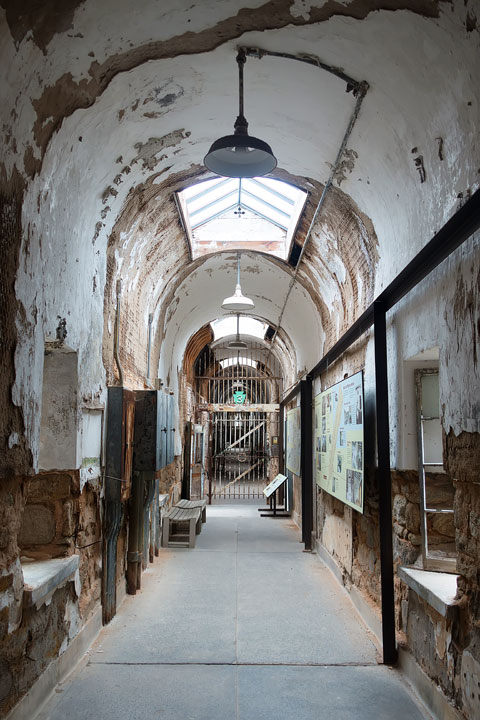 If you have 1-2 free hours in Philadelphia, I highly recommend visiting the prison. It is centrally located and very easy to get there. It is open 7 days a week from 10 am to 5 pm. The audio tour takes around 45 minutes and is narrated by Steve Buscemi.

Read More: Best Things To Do in Philadelphia 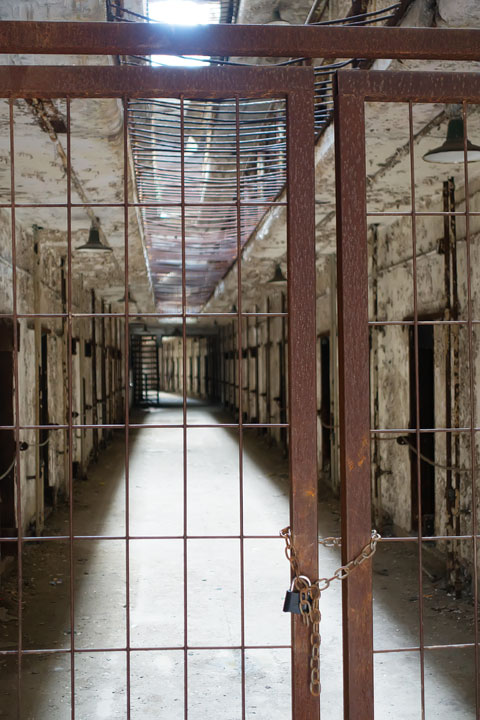 How old is Eastern State Penitentiary?

The prison was was from 1829 until 1971. At the time, it had a brand new system of incarceration. 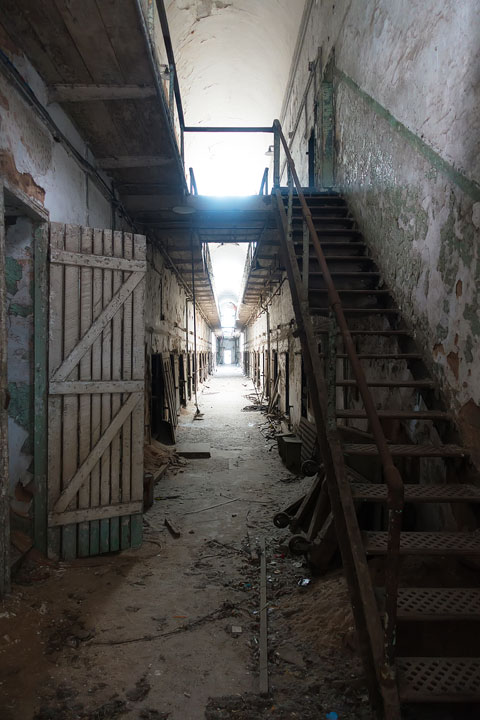 At the time, the prisons in America forced the convicts to share cells, work together, and used physical punishment. 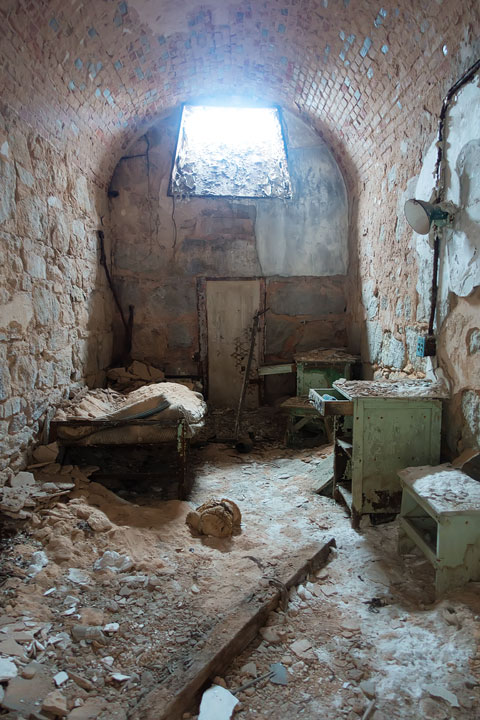 However the purpose of Eastern State was to create genuine regret and “penitence” in each prisoner. The prison emphasized inward reflection and reform rather than harsh punishment. It was the world’s first true penitentiary. 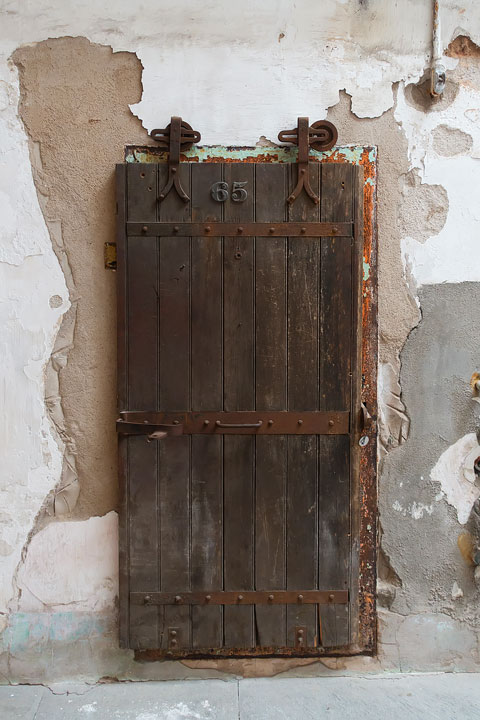 This new penitentiary system held each prisoner in solitary confinement. Each cell entrance had two doors: a short metal door, and a heavy wooden door to filter out noise, so the the prisoners couldn’t communicate with each other. Some believe the small doors forced the prisoners to bow when entering their cell. 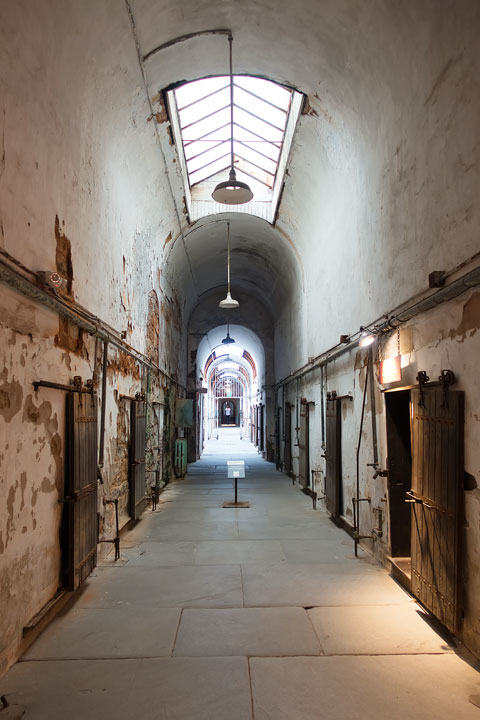 The halls of the cellblock were designed to have the feel of a church. 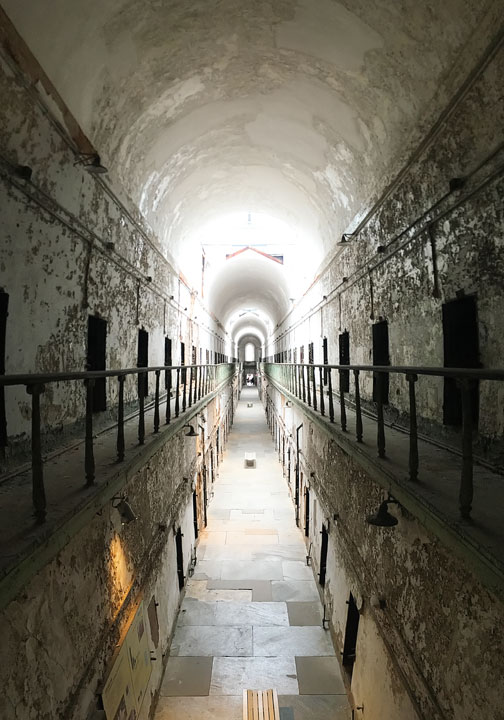 Anytime a prisoner left his cell, the guard wrapped a hood over his head to prevent knowledge of the building or interaction with the guards. 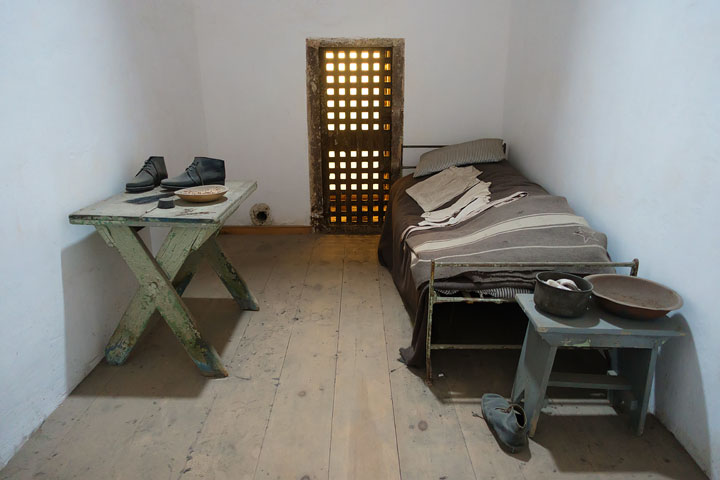 The Cells at Eastern State Penitentiary

Each cell had a small, private exercise yard attached. The yard was enclosed by thick, 10-foot high walls so prisoners could not communicate with each other. The guards scheduled exercise time so that no two prisoners next to each other would be out at the same time. In contrast, the prisoners were allowed garden and even keep pets in their exercise yards. 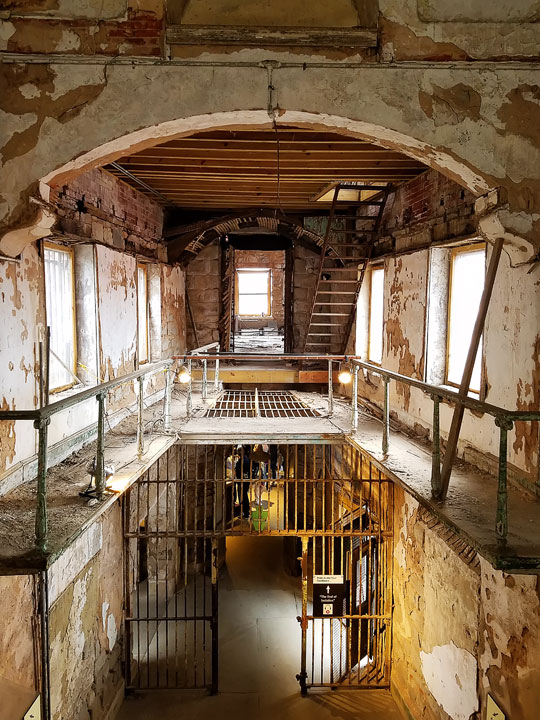 The cells were surprisingly advanced for their time. Eastern State’s earliest cell blocks may actually be the first modern building in the United States.

The cells had central heat and running water with a flushable toilet and even a skylight.

This was during a time when the White House (and its current president, Andrew Jackson) had no running water and was heated with coal-burning stoves. 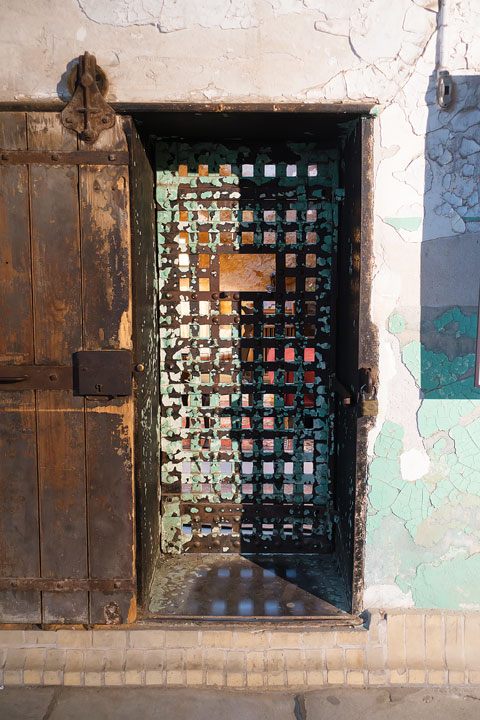 One of the most notable inmates of Eastern State is the infamous gangster Al Capone. 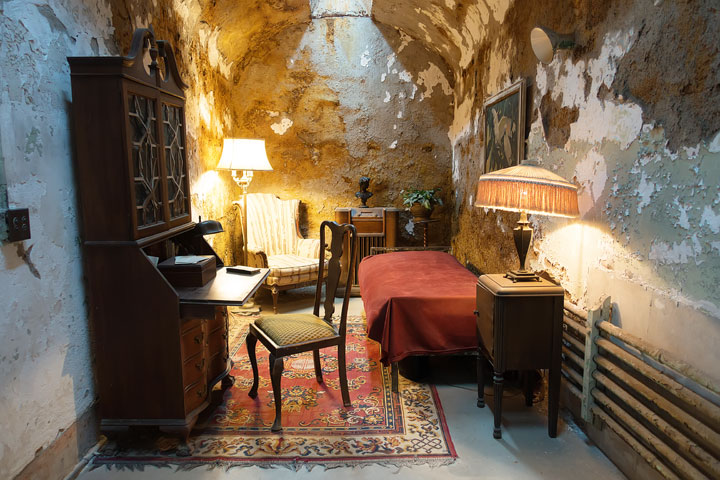 In 1929 he spent 8 months in this cell. The Philadelphia Daily Ledger reported that Capone enjoyed many luxuries during his stay. 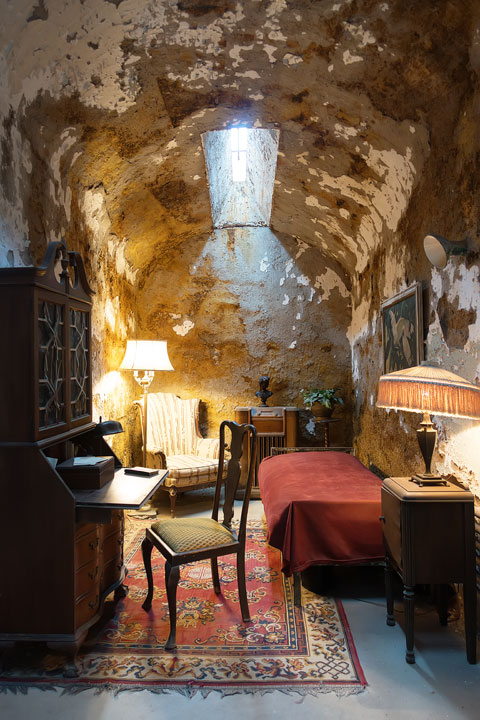 Reportedly his cell had large oriental rugs, oil paintings, and a radio. 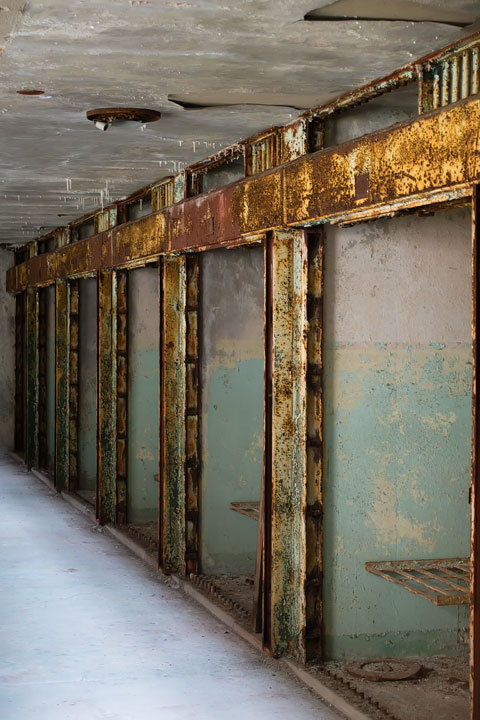 In 1959 a new maximum security cellblock opened. It became known as “Death Row”. A second set of bars in the center of the hall prevented contact between the inmates and guards. 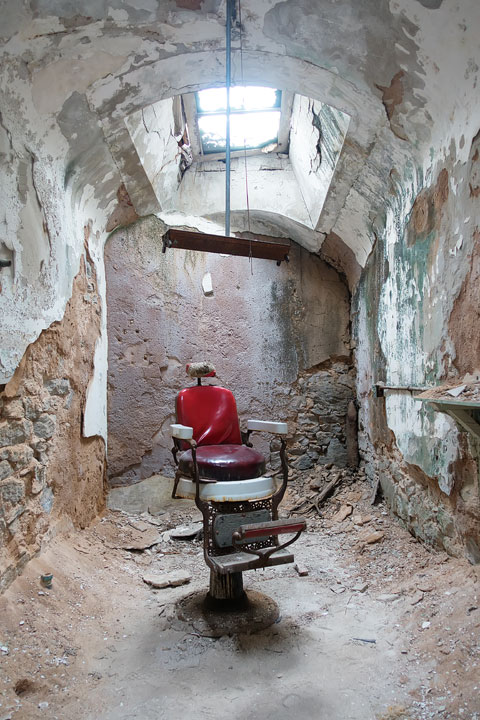 The remains of the barber shop. The barber shop had fluorescent lights, outlets, mirrors, and barber chairs. Inmates trained to be barbers and used straight razors for shaving the other prisoners. The guard on duty issued and signed out razors to the inmates. 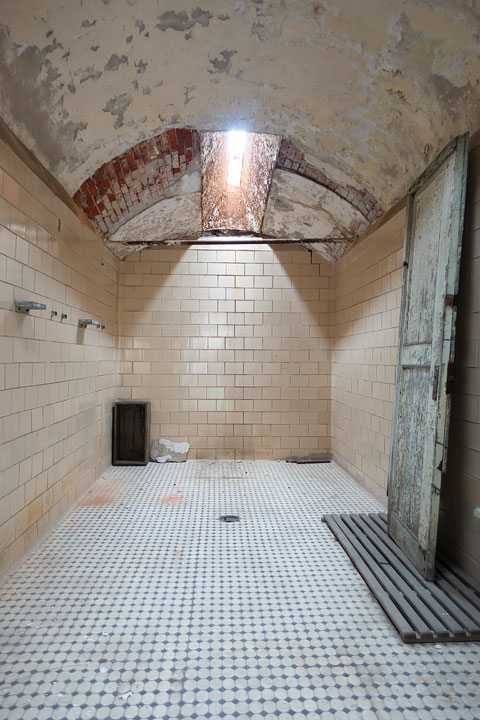 Above is the shower room. The prisoners shared one large shower. 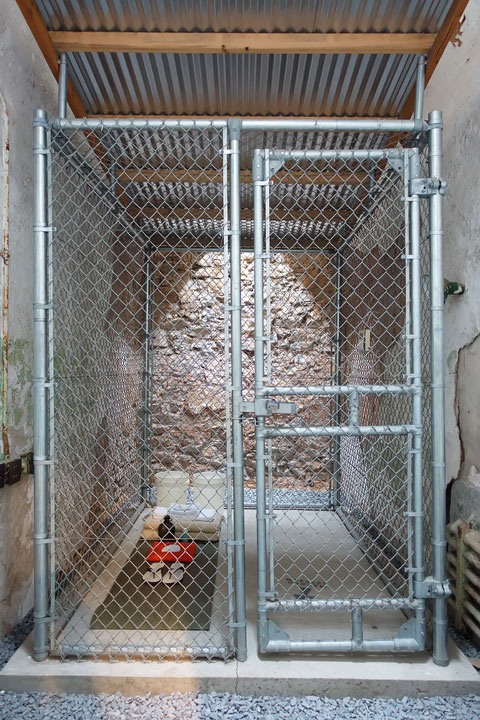 This summer there is an interesting new art installation inside one of the former cells at the penitentiary. This metal cage is an exact recreation of a cell from Camp X-Ray, the former holding cells at Guantanamo Bay in Cuba. 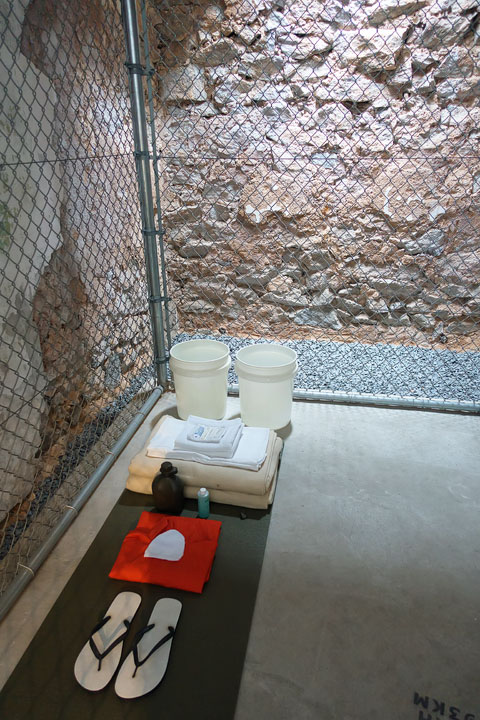 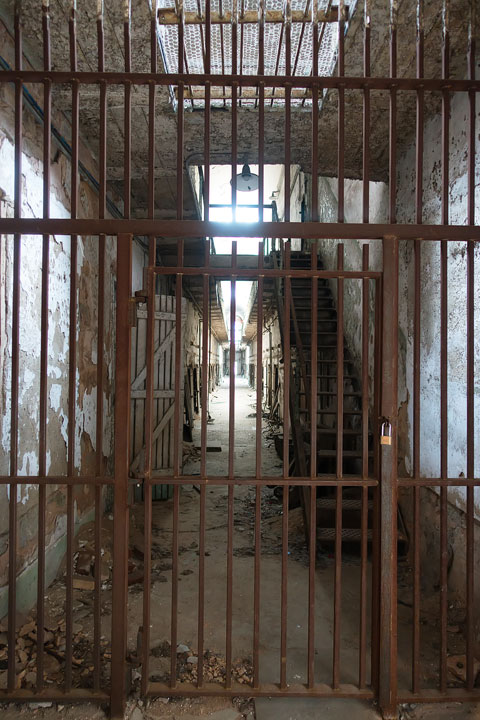 Read More: Best Things To Do in San Francisco

Read More: What It’s Really Like To Visit Alcatraz 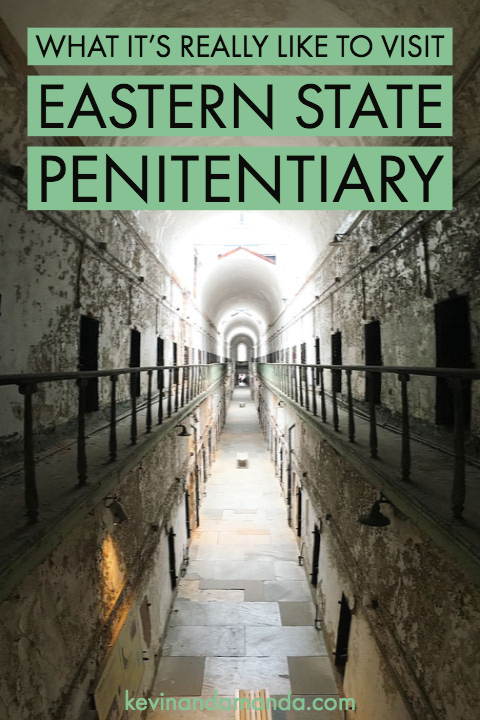 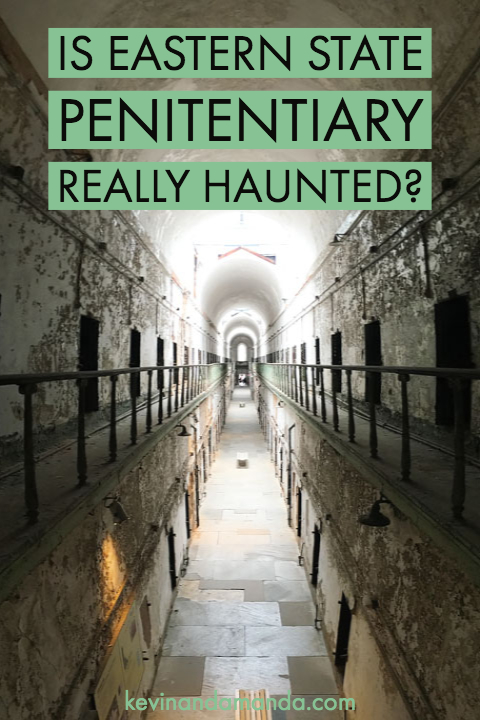 Previous PostUtah Ski Resorts — 5 Reasons Why Deer Valley Is Our Favorite!Next PostBest Things To Do in Bruges, Belgium
17 Responses