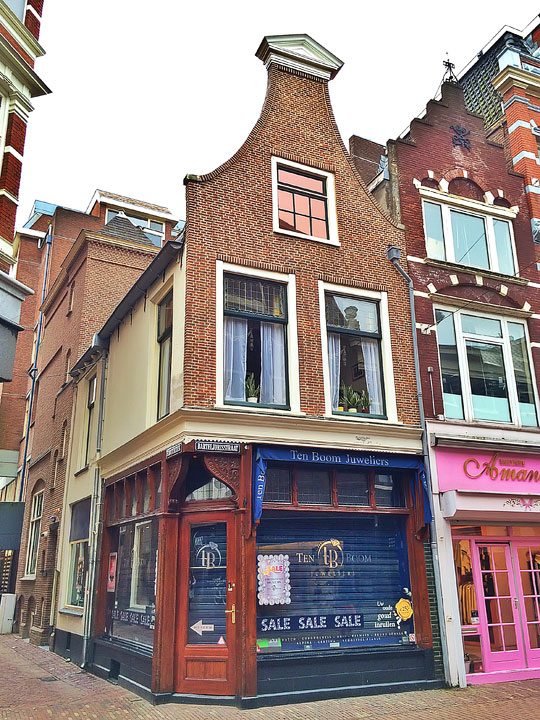 This is the home of Corrie ten Boom in Haarlem, just a 15 minute train ride outside of Amsterdam.  On one of our days in Amsterdam, we took a day trip here to explore the beautiful, quiet town of Haarlem and take a tour of this historic home. It amazed me to see that it’s still standing to this day, and the rooms have been kept in almost the exact condition as they were during World War II, when Corrie lived there with her father and sister. Corrie ten Boom’s biography, The Hiding Place, was one of the first books I read that made an impact on my life and left an impression with me I’ll never forget. It was truly an honor and a privilege to get to see her home, to be there in person, and see where so many important events took place. 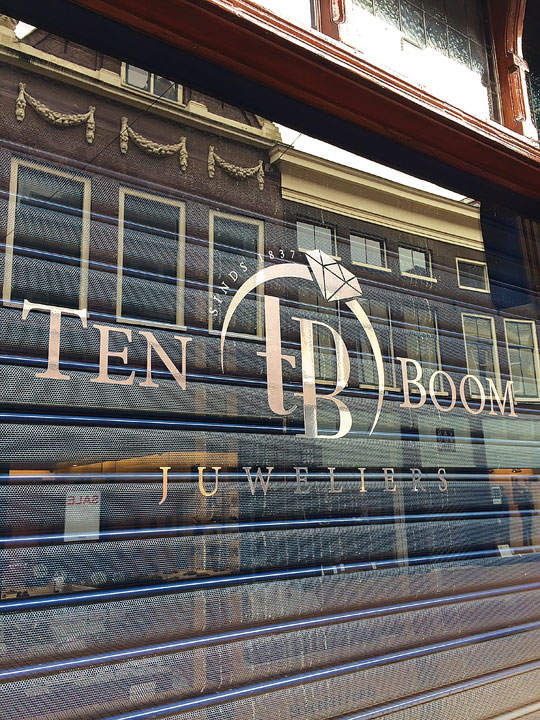 The ten Boom family owned a well-known watch shop on one of the main streets in Haarlem. Corrie’s father Casper was a highly respected jeweler and expert watchmaker. He was known as the best watch repairman in Holland and people came from all over Holland, even Germany, to have him repair their watches. In 1937, with Nazism on the rise, the ten Boom family watch shop was celebrating its 100th year anniversary. 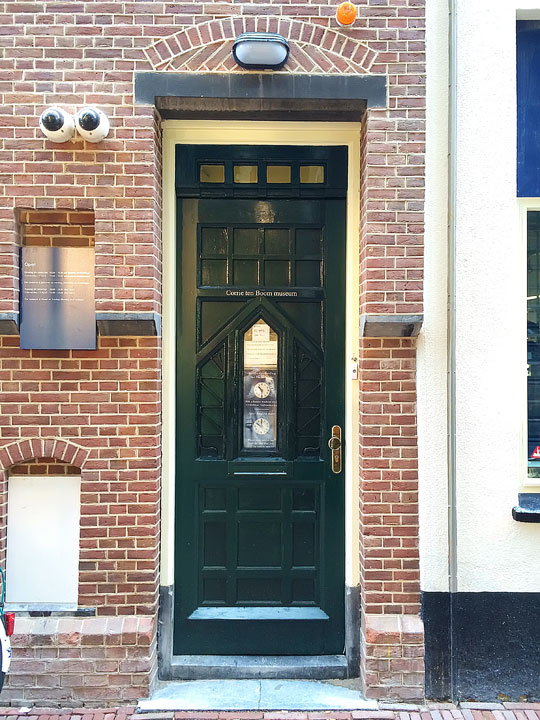 Corrie lived with her family in the strangely-built Dutch house above the watch shop, which was originally two separate houses later connected by a staircase. She describes the home in detail, as it would become the main setting of The Hiding Place. This was the side door that the family used, mentioned often in the book. 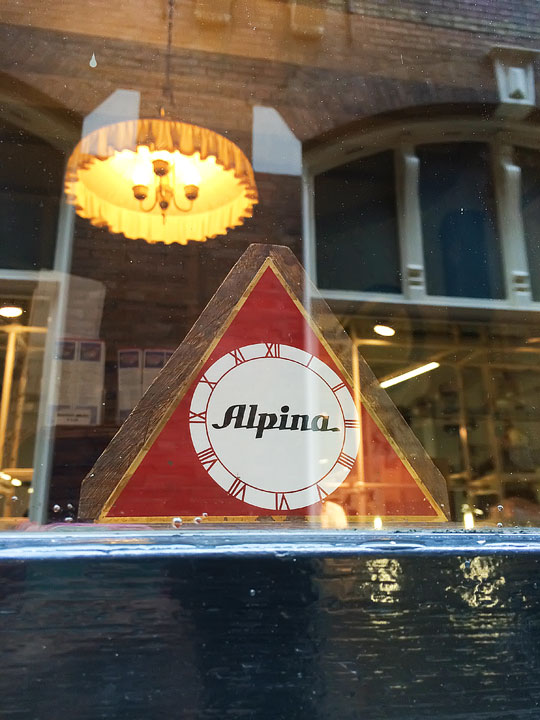 The ten Boom family themselves were not Jewish; they were Christian. However because of their deep religious faith and love for God, they wanted to do whatever they could to help their Jewish friends in any way possible. In a turn of events they would never imagine, their small home and humble watch shop soon became the center for a major anti-Nazi operation, and Corrie, who thought of herself as a middle-aged spinster, started a black market ring, gathering and distributing stolen ration cards, helping Jews escape, and eventually hiding Jews in her own home. A wooden triangular Alpina sign, like this one, was used as a signal to all she was working with that it was safe to enter the house. 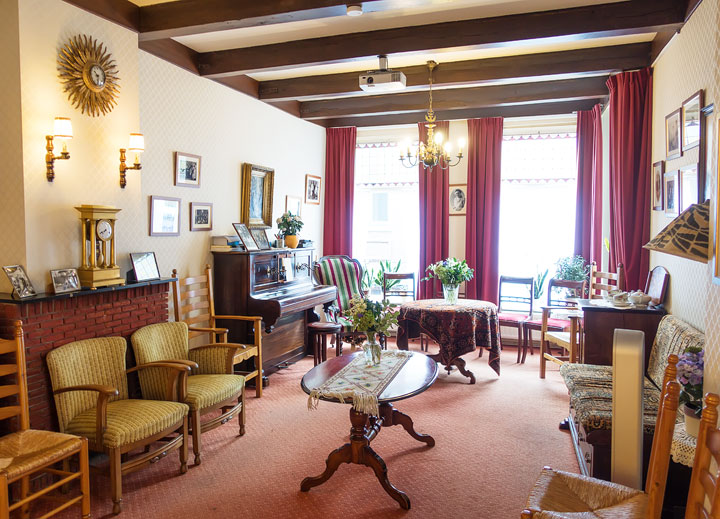 Corrie’s main effort was to help Jews escape. She would find families who were willing to take Jews in and hide them, or who could transport them further to safety. When she came across someone who no one else would take, like the man who “looked too Jewish” for anyone to take in, or the woman with a loud whooping cough who was too difficult to hide, Corrie started hiding Jews in her own home. She would eventually hide six people in her home. This was their living room, overlooking the main street. 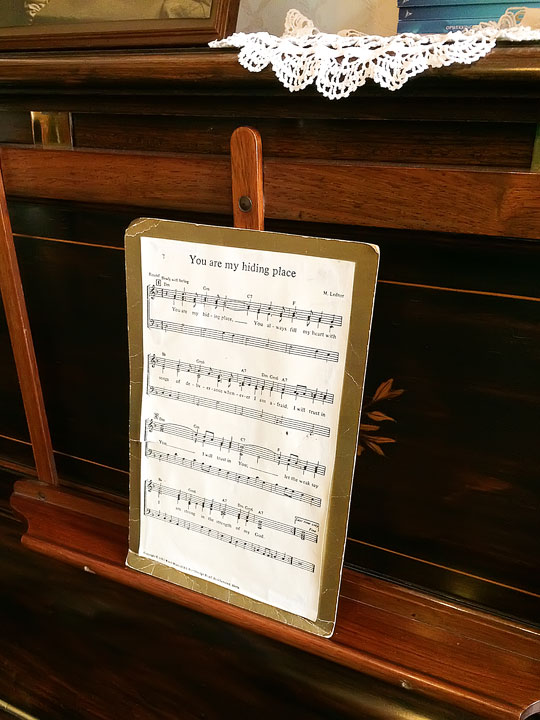 A copy of You Are My Hiding Place rests at the family piano. 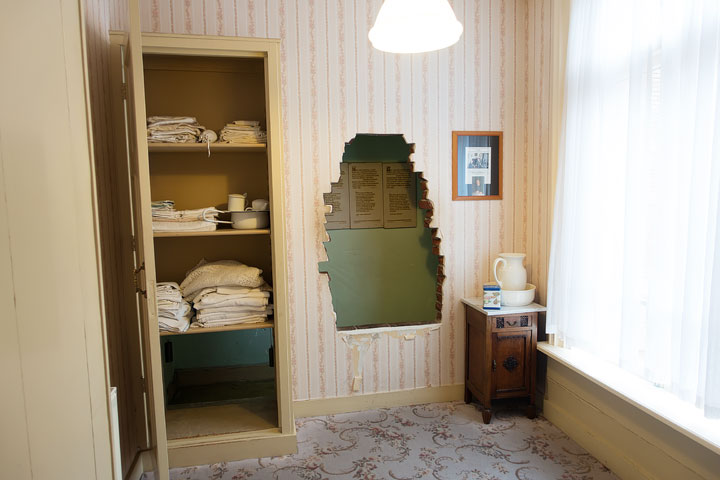 The Jews in Corrie’s home did not actually live in hiding — they lived, slept, and ate in the main part of the house with everyone else. An expert architect Corrie met through her work with the Dutch underground constructed a secret hiding place in Corrie’s bedroom where the Jews could run and hide should they ever be raided. The hiding place was just big enough for the six adults to stand in silence with their back against the wall.

The hole in the wall was added after the war, to show visitors the Hiding Place once the home was turned into a museum. The hole is where the headboard of Corrie’s bed once stood. The secret entrance to the hiding place is in the bottom of Corrie’s closet. 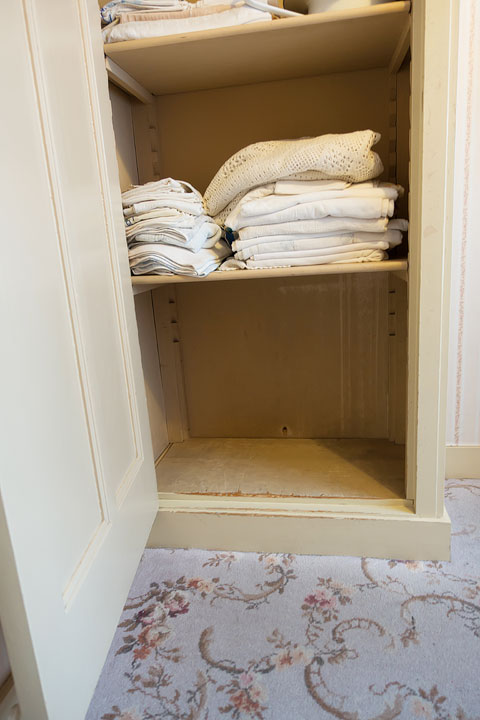 The Jews would crawl into the hiding place from the bottom of the small closet. They practiced daily for the inevitable raid. An alarm system was rigged up, and they held unannounced drills every day, even during the middle of the night. With the push of a small, out-of-the-way button, a very quiet buzz would go off — it couldn’t be too loud for fear the very close neighbors or police would hear. Their goal was to get themselves, and ALL of their belongings into the hiding place in 60 seconds. Not only did they have to run up a very tight spiral staircase and dive into a tiny crawlspace, they had to stop whatever they were doing, gather all of their clothes, toiletries, and belongings, strip the beds, grab the sheets and carry everything upstairs and into the hiding place. There were only supposed to be three people living in house: Corrie, her father, and her sister. In reality, there were NINE people living in the house. They had to make it look like there were only three, in some cases emptying the trash and putting away dishes if the raid occurred during the middle of meal, as they often did, in 60 seconds. With their daily drills and practice, they were able to get it down to 70 seconds.

Eventually the family was betrayed, and the family was arrested and taken to prison. Corrie’s elderly father died in prison 10 days later, and Corrie and her sister Betsie were taken to the concentration camp at Ravensbruck, where Betsie later died. Corrie eventually escaped from Ravensbruck, and lived to be 91. But all six of those hiding in Corrie’s secret room were saved — they were never found.

We were allowed to stand in the hiding place with our backs against the wall, just as the Jews did in when they were raided in 1944. The ten Booms were betrayed — the Nazi’s knew they were hiding Jews. They searched the house top to bottom for a secret room for two straight days, banging on walls and ripping off wallpaper and were never able to find it. As we stood in the dark, shallow hiding place, our guide knocked and scratched on the walls, asking us to imagine we were hiding for our lives, knowing the Nazis were just inches away. 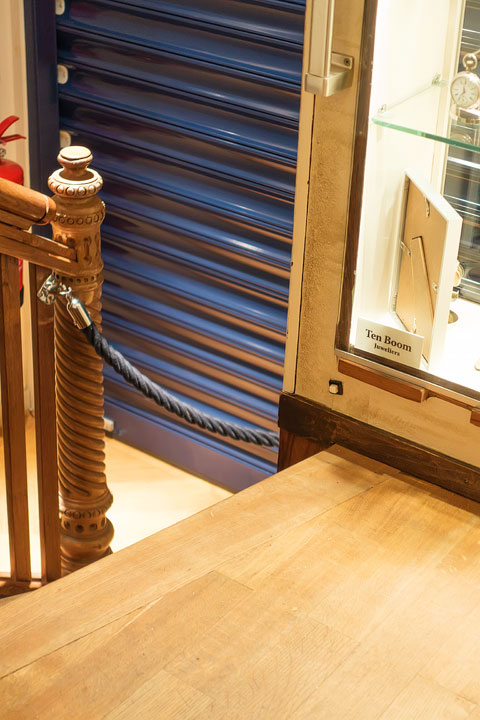 Do you see the small button under the Ten Boom Jewelers sign? That’s the button that would sound the alarm, and it is still working to this day. Our tour guide pressed it for us to hear. The blue door is the entrance to the watch shop. 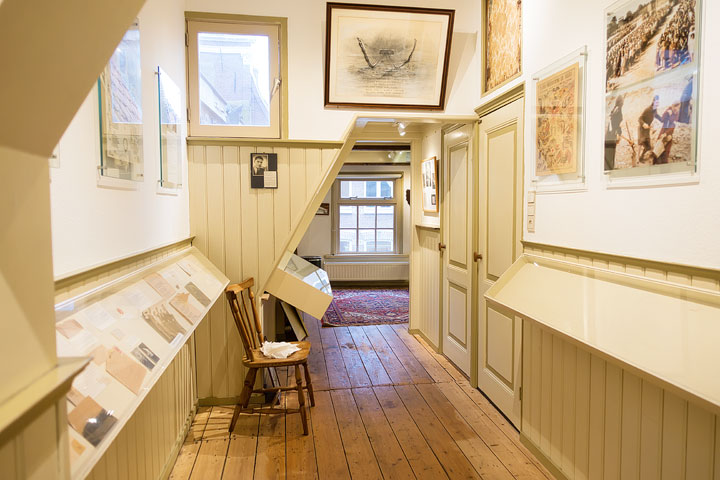 We were able to see the entire house, the rooms where the family and Jews lived. 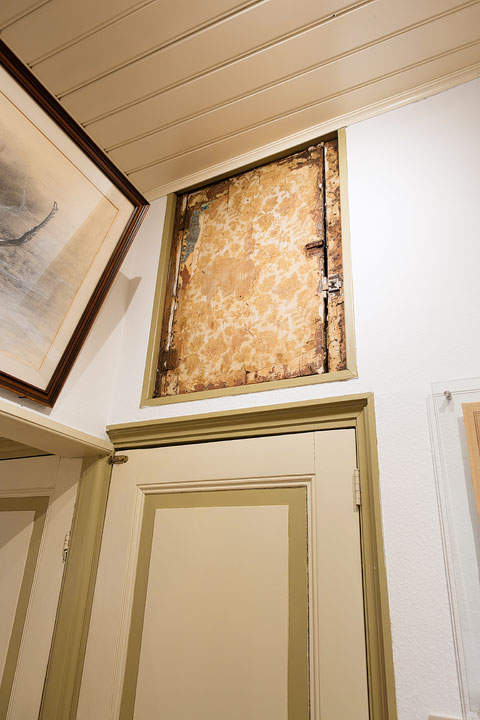 This was their original hiding place, before the secret room was constructed. Here the ten Boom family hid their other contraband items like their fine china, silver, and radio. It was the first place the Nazis looked when they raided the house. 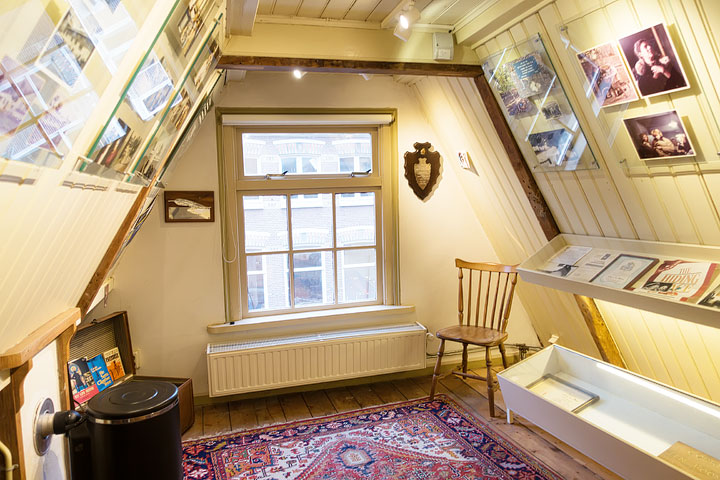 The room has been set up as a museum of the ten Boom family’s life and efforts. 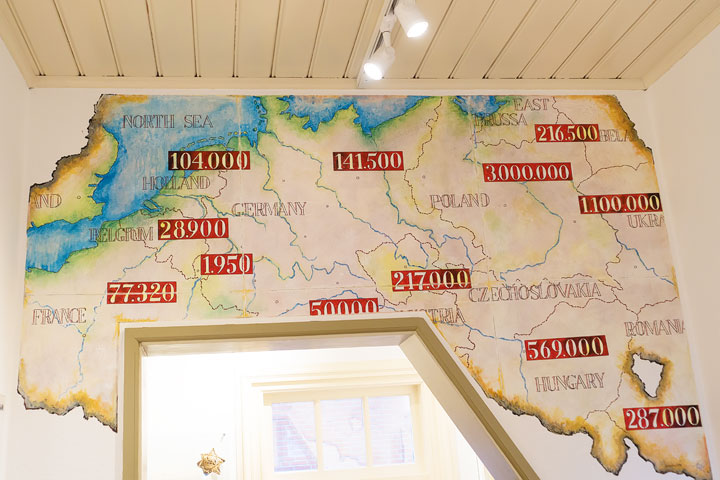 A map of the concentration camps in Europe, with the number of how many people died there in red. 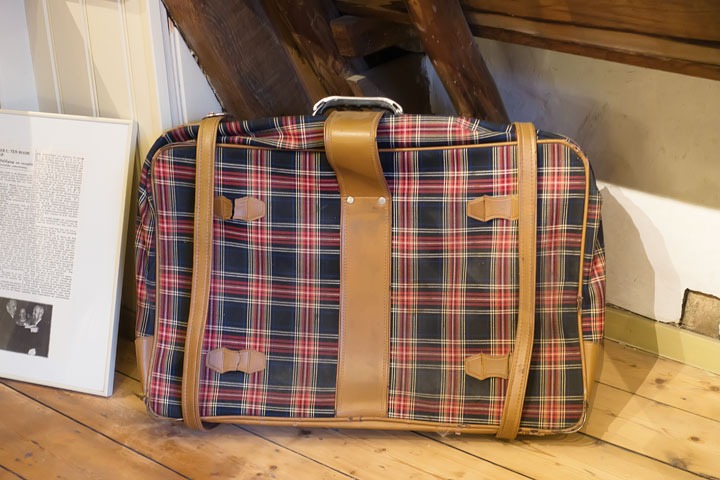 Corrie’s suitcase that she used after she escaped Ravensbruck. 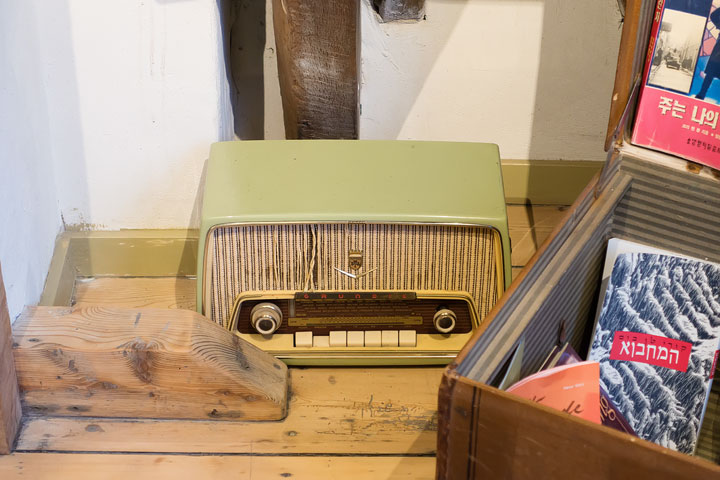 The family radio that was used and owned illegally during the war. 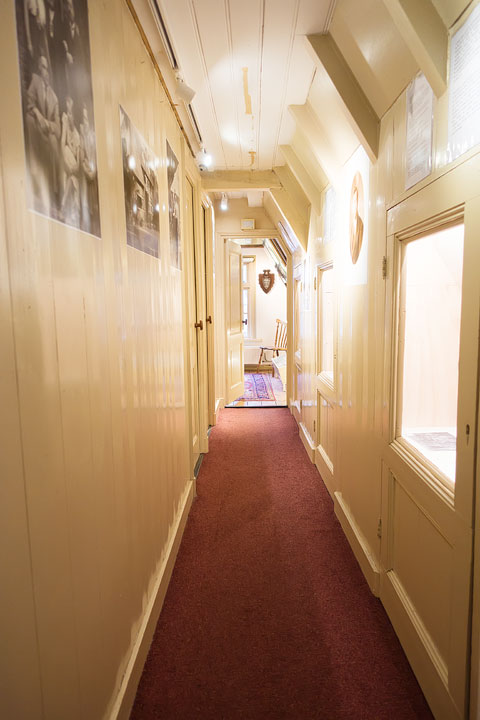 A view down the hallway. 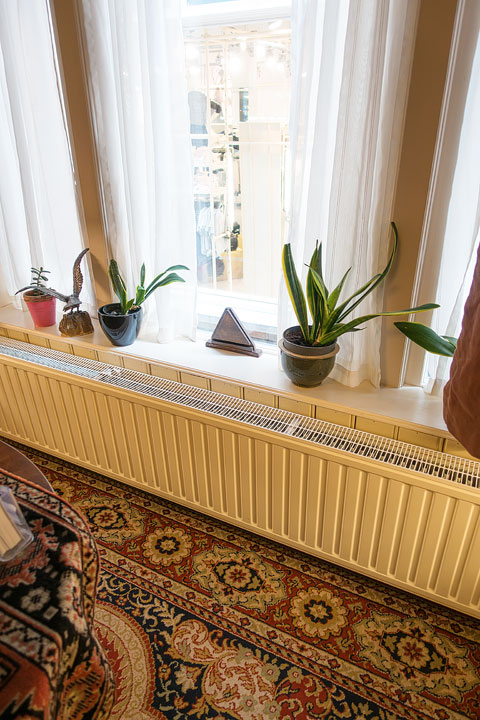 The wooden triangular Alpina sign the family used as an “all clear” sign, sitting in the window of the dining room. During the raid, the original sign was knocked off the sill and broken. 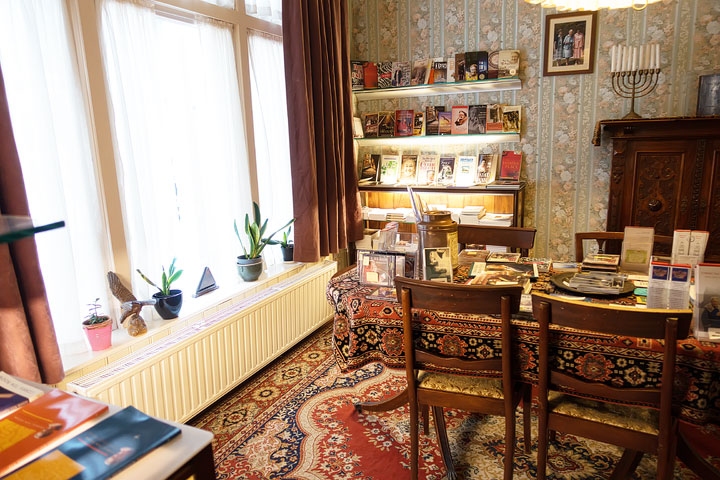 When you enter the side door, the dining room is on the left. Behind me is the entrance to the watch shop and the alarm button. There’s a staircase by the alarm leading to the living room overlooking the main street, and up one more flight of stairs is Corrie’s bedroom and the hiding place. 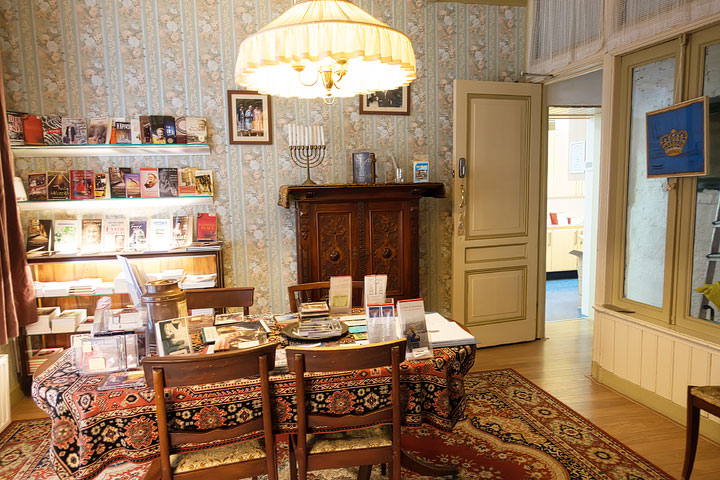 Another view of the dining room, where the family ate every day. 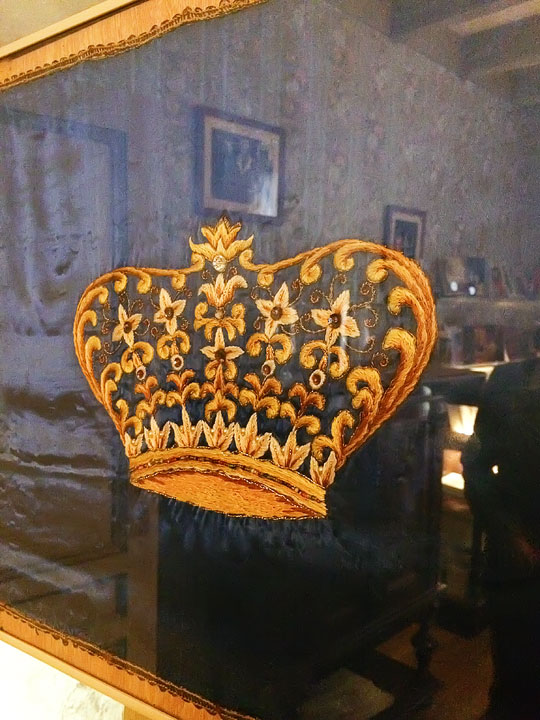 A close up of some of Corrie’s embroidery.

I am so incredibly grateful to have had this opportunity, to see the setting where a book that meant so much to me took place. I will treasure it always. The entire story of Corrie’s experience can be read in The Hiding Place.

Thank you so much for looking. I’m so grateful for you all.