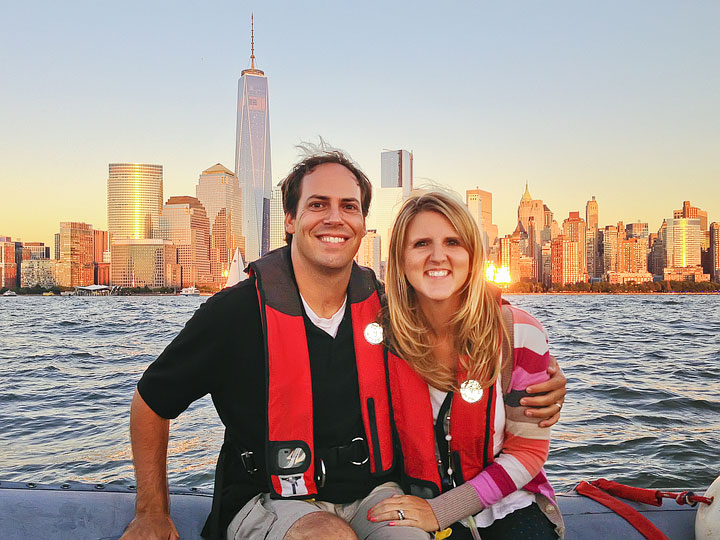 Last weekend Kevin and I spent a few quick days in NYC together. We had so much fun this trip! Whenever we travel together, I usually pick where we eat, and he picks what we do. It works out great! :) He always does his research and finds the neatest things for us to do. And likewise, I’m obsessed with food, so I pour over Yelp reviews before narrowing down a restaurant. :)

Below is a review of what all we found in NYC this trip. :) If you’re planning a visit, maybe  you’ll find a few new things to add to your list, or maybe some things you want to skip, lol! :) 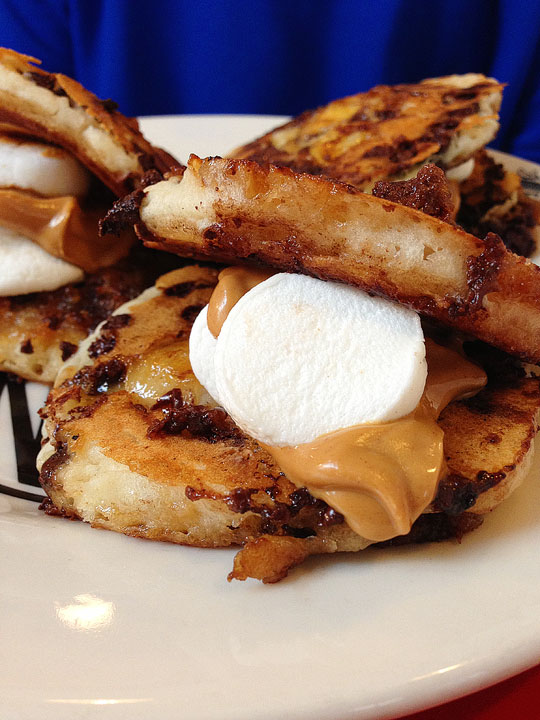 We started with breakfast at Shopsins in Essex Market. Kevin ordered the Chocolate, Peanut Butter, and Banana Pancakes with Marshmallows. No surprise there, lol!

Here’s what I thought about Shopsins:

Final thoughts: Kevin’s pancakes were good (too banana-y for me, but very yummy otherwise) and my S’mores French Toast (not on the menu, but I saw it on Yelp and asked for it) was just okay. Too eggy for my liking. I would like to go back if I knew exactly what to order! 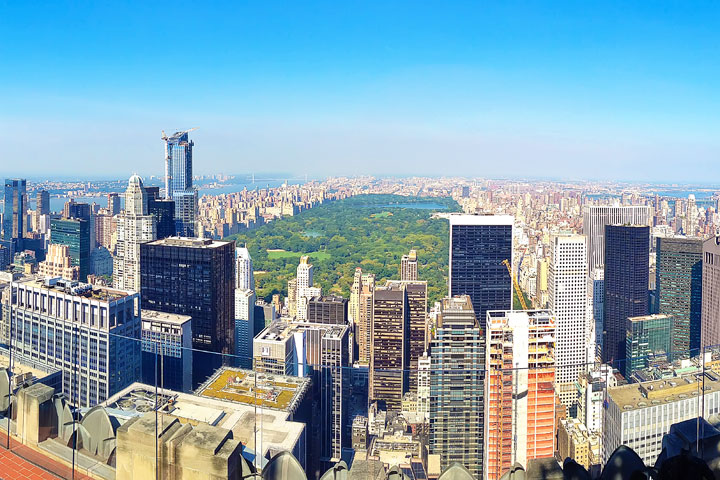 Top of the Rock vs. Empire State Building 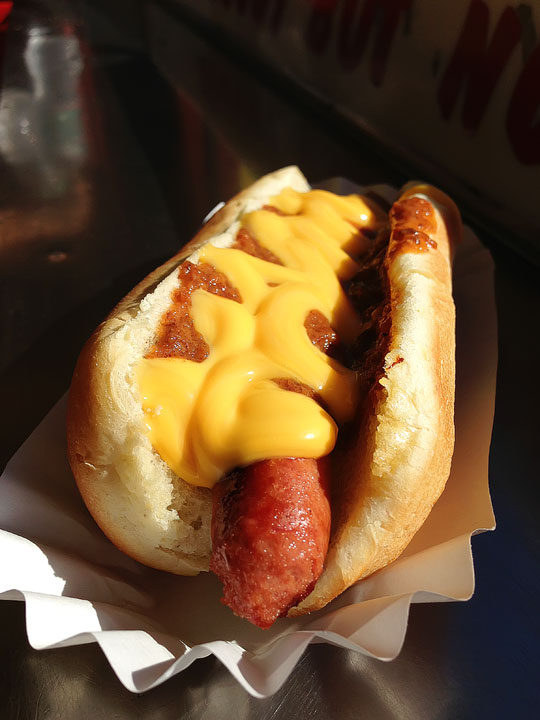 Kevin realllllllllllllllly wanted a street vendor hot dog, so I went on the hunt for the best hot dog in NYC. Everything lead to Gray’s Papaya. It’s not exactly a hot dog cart, but only slightly one-half step up from one, lol! :) So for lunch on our first day in the city, we headed straight there.

Kevin loved it, but I didn’t really think it was anything special, lol! 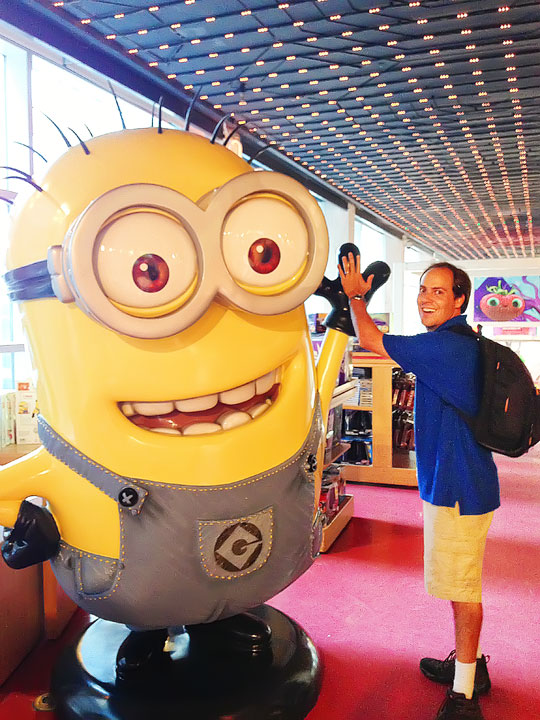 We went to FAO Schwartz and saw a giant minion!!! :) Such a fun store for kids and grownups alike. :) 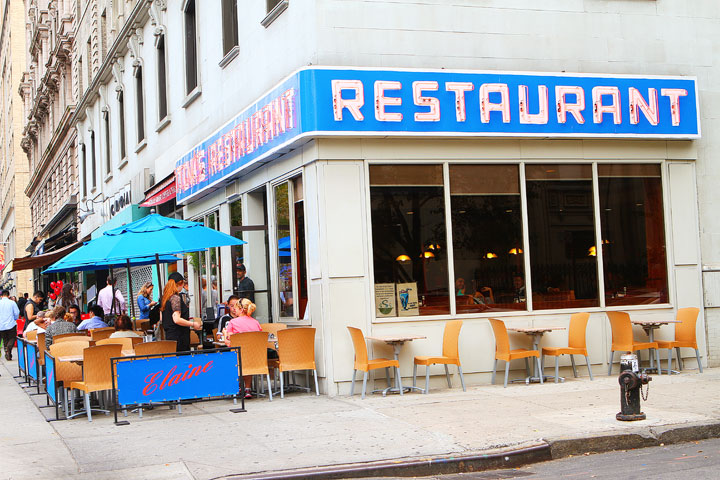 Kevin wanted to see some “famous sites” around NYC, so of course we started with the cafe from Seinfeld! :) It was so neat walking up the street seeing it right there in person! :) 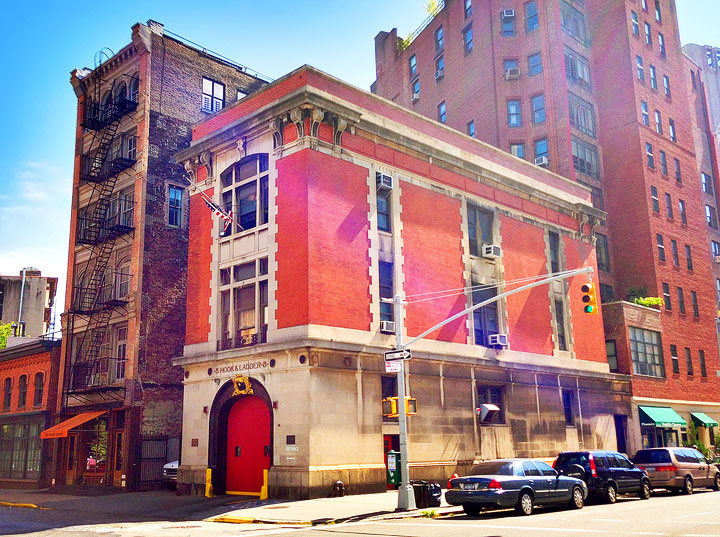 Okay, so, funny story about the next place. Now, Kevin usually plans what we do, but since I’m familiar with the city and very comfortable taking the subway, I am usually the navigator.

On our first day in, on the way to our boat tour, we walked right by the Ghostbusters Fire Station. I knew I recognized it from something, but couldn’t really place it, so I pointed it out to Kevin.

He said “uh huh” in that way I knew he really wasn’t listening.

Oh well! I thought it was neat! :) Two mornings later, he was making his list of the tv and movie scenes he wanted to see and asked if I knew where the Ghostbusters Fire Station was. I replied, “Is it Hook and Ladder 8?”

…And he said yes.

“But you didn’t say Ghostbusters!!!” 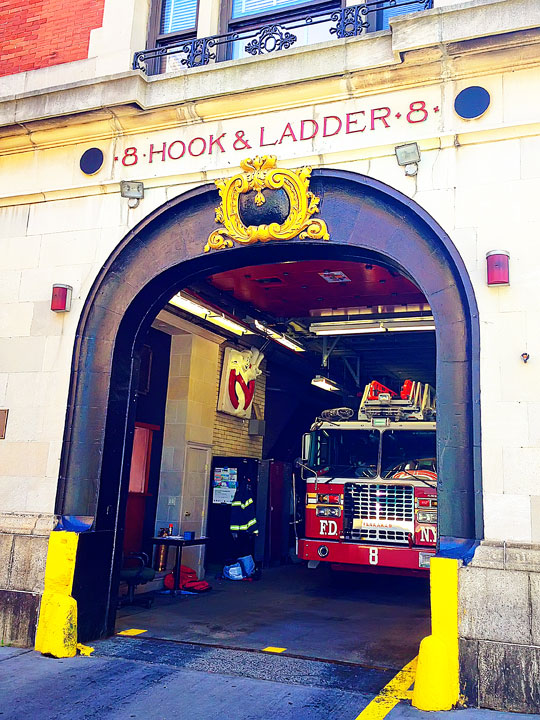 This time they opened the doors and we could see the Ghostbusters sign inside. How fun is that? :) 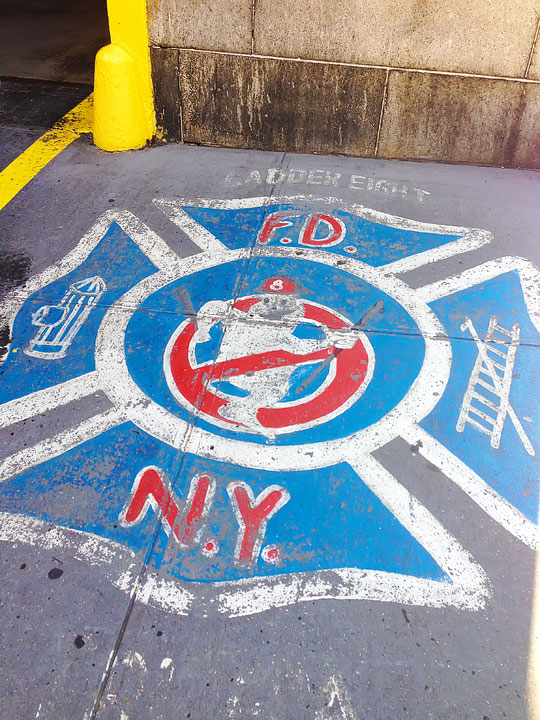 There’s also the Ghostbusters insignia on the sidewalk in front, so you don’t miss it. If we’d been walking on that side of the street, we would’ve known for sure! :) 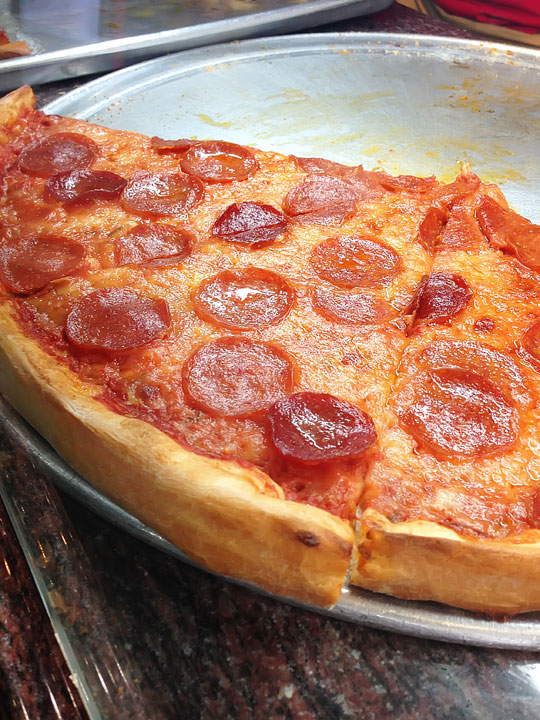 On Saturday afternoon, we made our way over to Bleecker Street Pizza in Greenwich Village. I looove Greenwich Village, and if I lived in NYC, that would be my dream neighborhood! It is also where the Friends building is. I can totally see myself living across the hall from Joey, Chandler, Monica and Rachael and running around Greenwich Village! :) It is such a gorgeous neighborhood. And Bleecker Street Pizza is constantly voted as “NYC’s Best Slice” so it’s a great place to grab an authentic slice of New York pizza. It’s thin, but the bottom has this wonderfully soft-crisp crust. It’s chewy and crisp and thin and unique and perfect and not soggy at all. I love it! 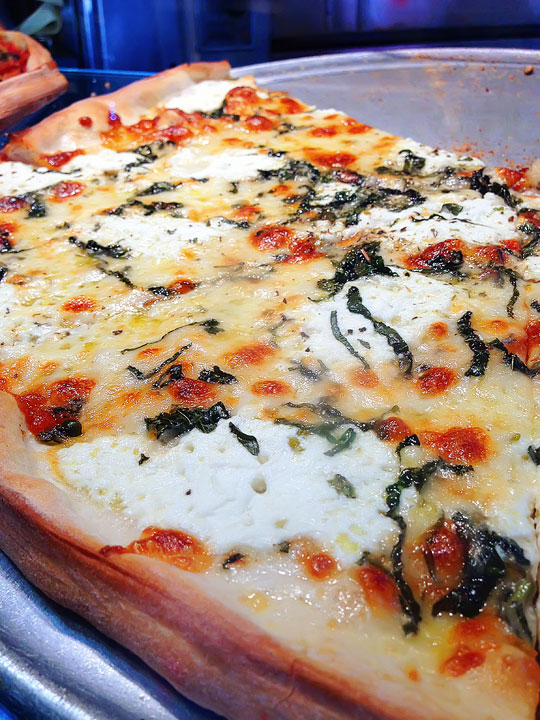 Had to try this white pizza too! Yum! They have several different pizzas available and you can just get a slice of whichever one you want. Or you can get a whole pie! Definitely add Bleecker Sreet to your restaurant list in NYC! :) 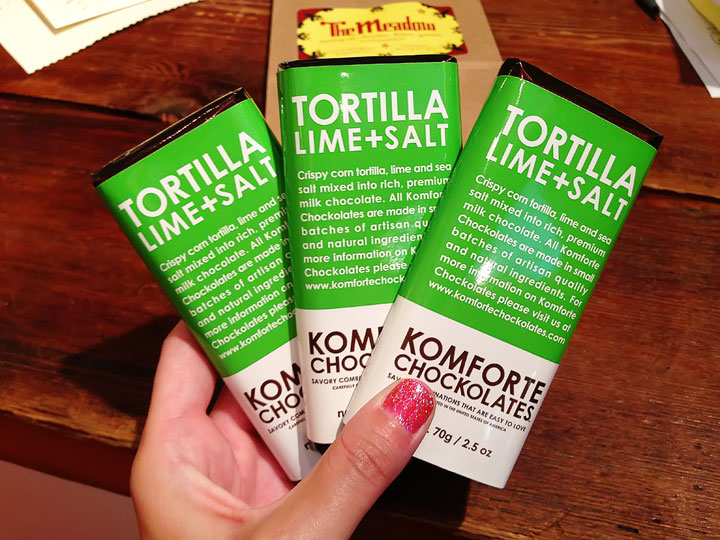 After lunch we walked over to The Meadow and picked up my favorite Tortilla Lime Salt chocolate bars. These are great to bring back as souvenirs! Even if you don’t think you’ll like it, try one — I promise it will be your new favorite! :) 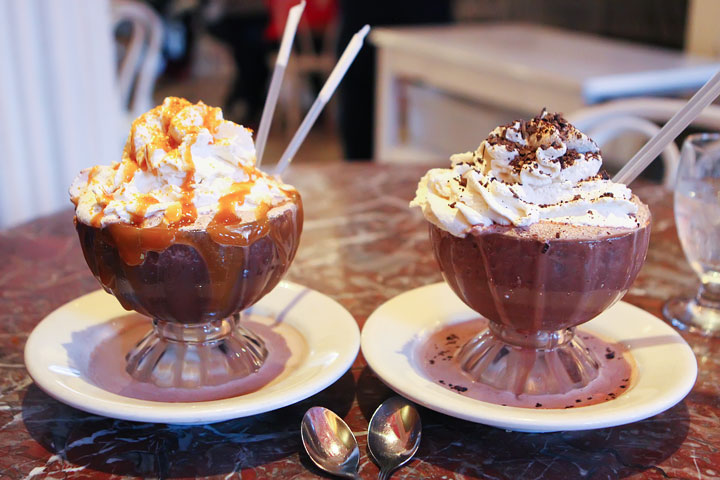 Serendipity III is always one of my favorites in NYC!! :) I love their Frozen Hot Chocolates! 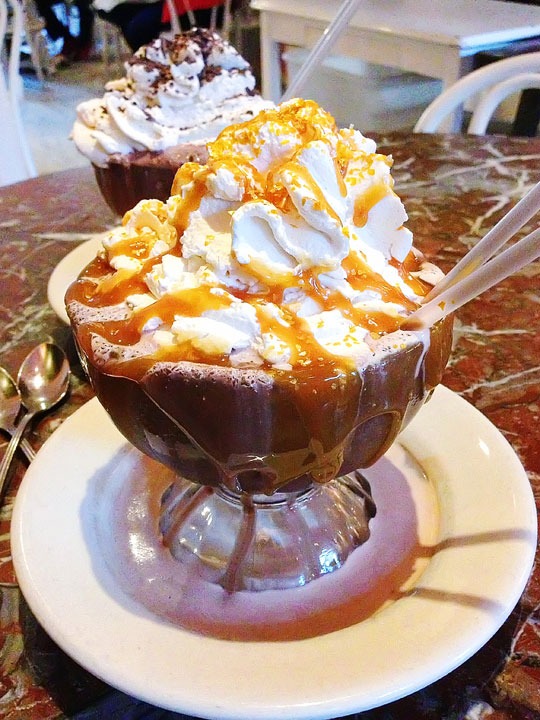 They always have fun new flavors, and this time I tried their Frozen Salted Caramel Dark Hot Chocolate. 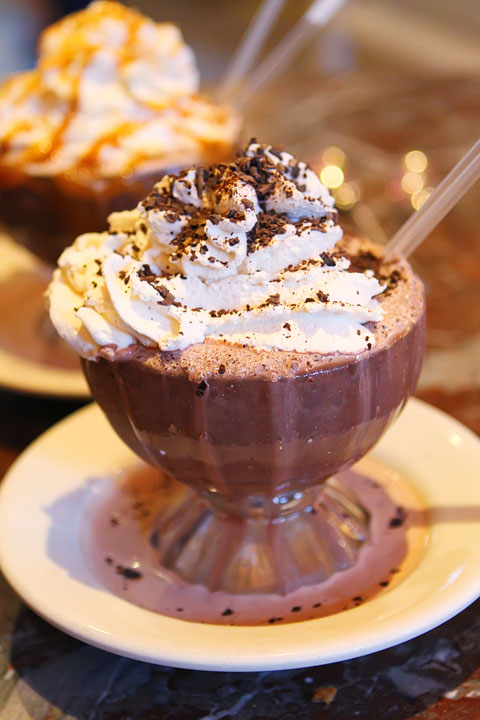 It was yummy, but my favorite is still the Frozen Peanut Butter Hot Chocolate! :) You have to try this one! :) 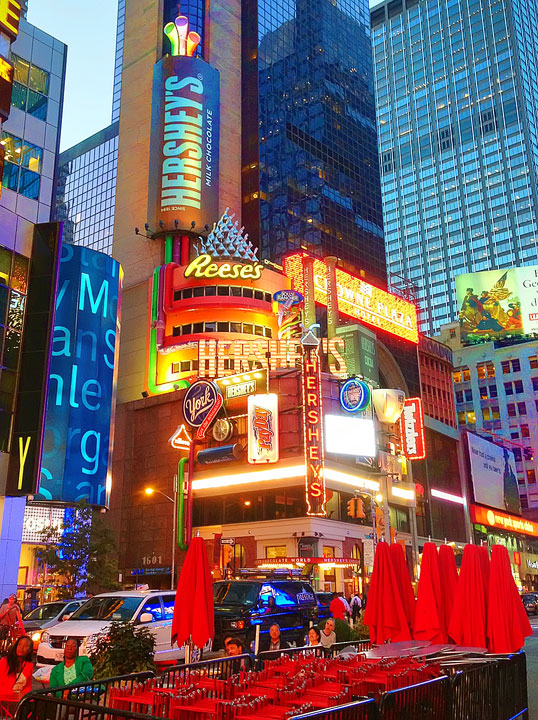 I always love going to the Hershey’s Store and the M&M store in Times Square! It is such a madhouse, but they also give free samples of all the fun new M&M flavors. So… priorities. Obviously. ;) 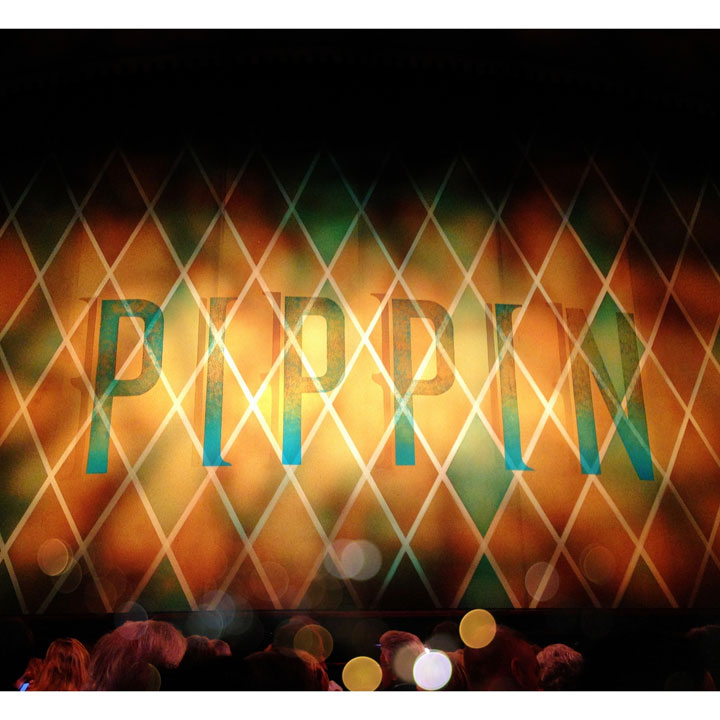 This time we chose Pippen as our Broadway show.

Our review of Pippen! :)

Okay, I will just say, it is a thrill to watch — so fun and so funny!!

But the ending… (without spoilers)

The ending was just not how I wanted it to end. You’re on such a thrilling high the entire show, you expect it to go out with a BANG!! A huge number and the curtain drops and the stage goes black and everybody leaps out of their seats in applause!!

But the ending gets kind of sad. And… uncomfortable to watch. And it doesn’t go out with a bang.

So when Pippen says “Is that it?”

So, if you see it (which, I think it was worth seeing) just go in prepared for that!

If you’ve seen it, what did you think about the ending? Did you love it? Hate it? I would love to hear your thoughts! 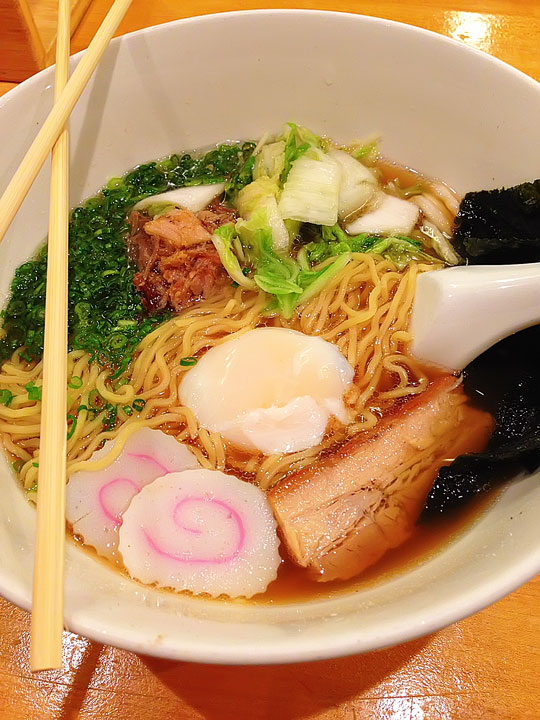 After Pippen, I was literally starving and I’ve been dying to try Momofuko Noodle Bar, so since it was our last night, we made our way there for some midnight ramen. First of all, ramen noodles + pulled pork + a runny egg on top is genius. Momofuko Noodle Bar, what took me so long to try you??! :) 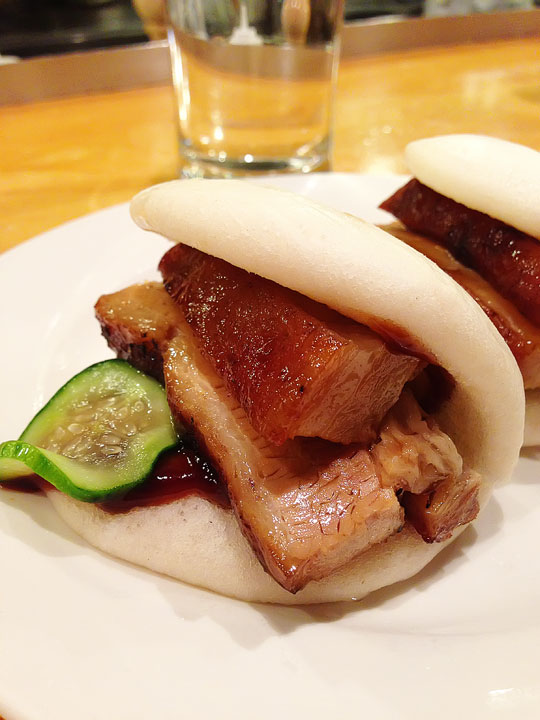 But this. The pork bun.

This was life changing.

This has been haunting my dreams since we left. I could’ve eaten like 20 of these. 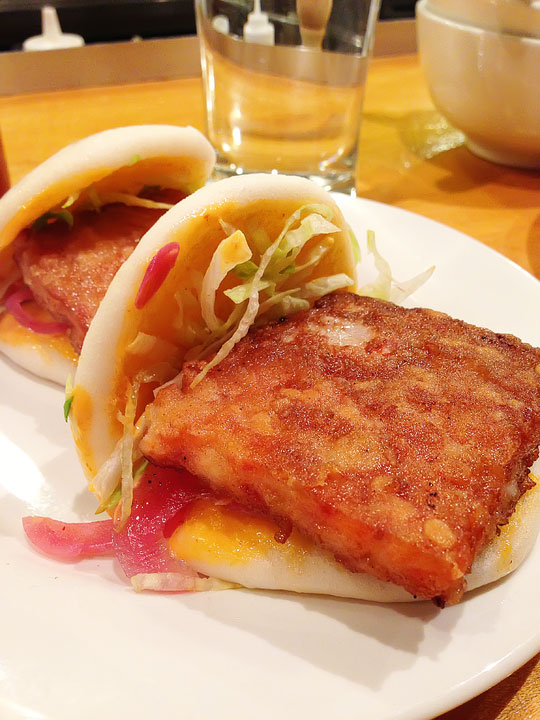 The shrimp bun with spicy mayo, pickled red onion, and iceberg lettuce was also yummy. I actually thought I’d like this one the best, but the pork bun stole my heart! 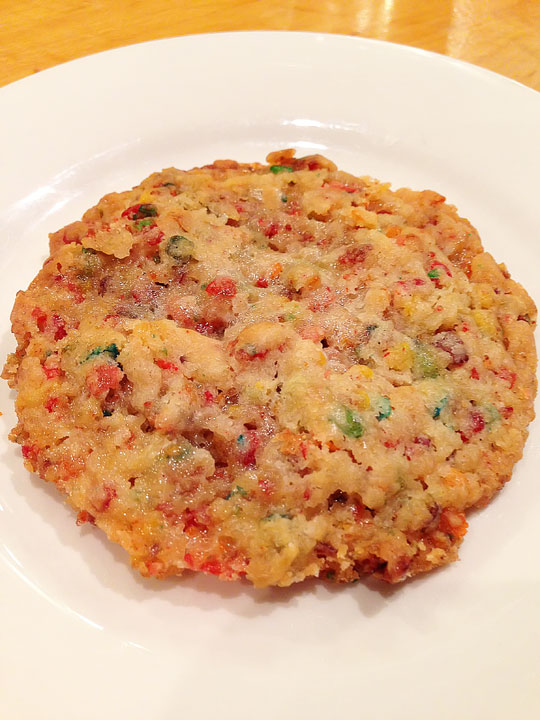 And of course, we had to end the meal with a cookie from Momofuko Milk Bar. :) This is the Fruity Pebbles & Marshmallow Cookie. Very interesting! And very fruity, lol! It was like a fruity pebbles rice krispy treat married a gooey cookie.

And then we went home! :) Well, Kevin went home, and I spent a few extra days for the Hellmann’s Birthday Party. More on that coming soon!! :)

If you’re planning a trip to NYC, here are a few more posts you might find helpful:

What are some of your favorite things to do in NYC?? I would love to get some new ideas for next time! :)

Thanks so much for looking!! :) xoxo