Exploring the city of Paris, France has been a dream come true! Seeing the Eiffel Tower in all its glory took my breath away! Check out everything we’ve done so far in Paris! 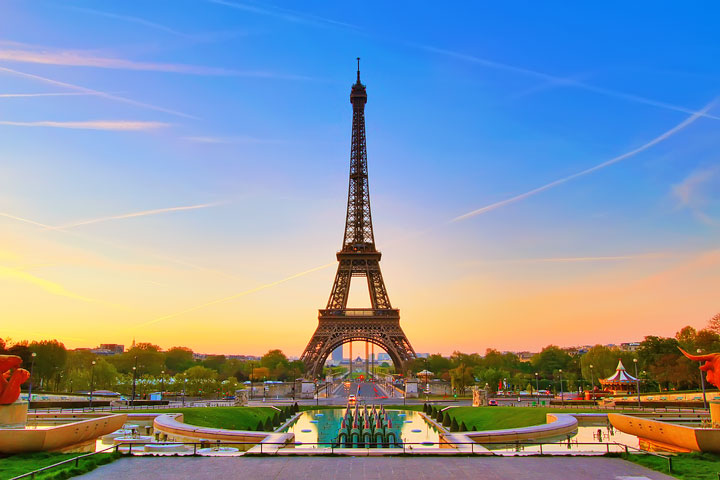 Seeing Paris for the First Time

Oh my gosh you guys!! Paris!! We finally made it!! :) With just 5 days left to go in our European getaway (after 5 days in Scotland and 5 days in London) we were nearing the end of our amazing adventure. Neither of us had been to Paris before, and I was so just beyond happy to be there together, experiencing everything for the first time, and celebrating nearly 12 years with my husband. 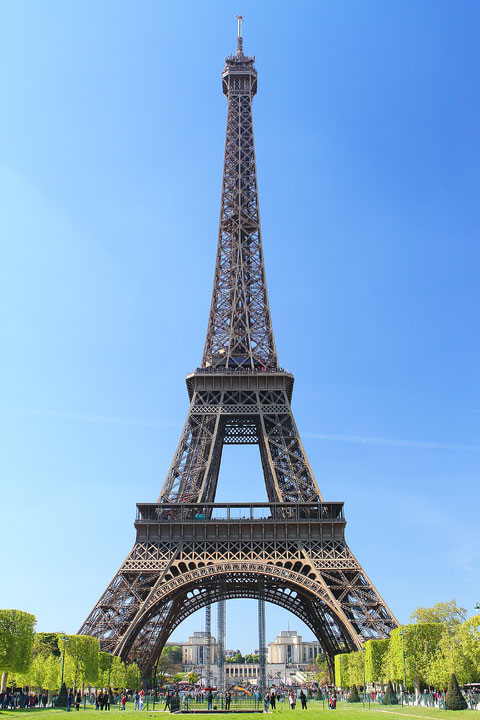 The first thing we did was grab lunch at a cafe near our hotel, then we wandered the Parisian streets and made our way to the Eiffel Tower. 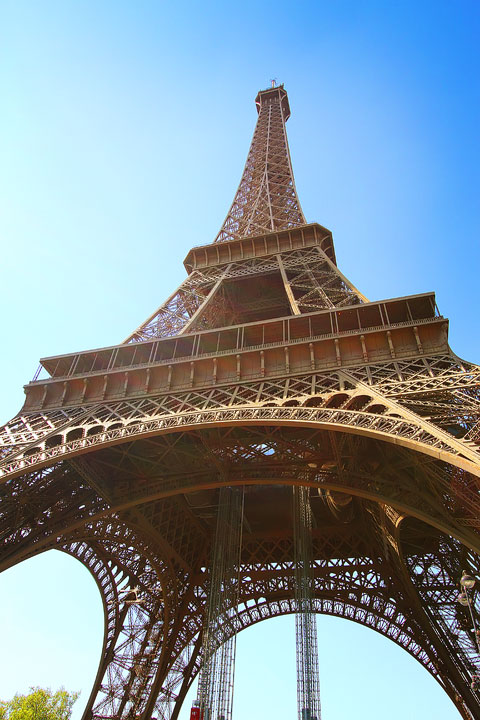 The Best Way to See the Eiffel Tower

We booked a Skip the Line Eiffel Tower Tour with Fat Tire Bike Tours for our first afternoon in Paris. When we bought the tickets weeks before our trip, we didn’t really care about the tour. We just wanted “skip the line” access. But I’m actually really, really glad we ended up doing this tour, and especially on our first day in Paris. The skip the line access was 1000% worth it, because by the time we got there that afternoon, the line to get the top was at least 3-4 hours long. However, with our tour, we really did skip the line and went right on up. (These access elevators you see here were for renovations they were doing on the first floor restaurant.) 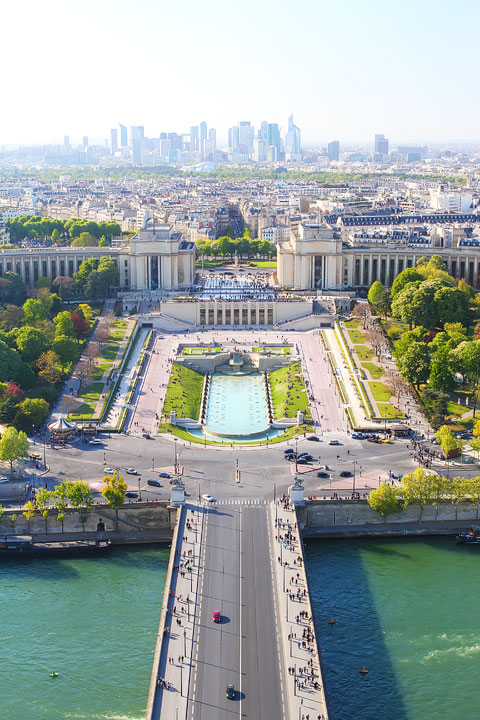 But the tour was also great for orienting ourselves on our first day in Paris. The tour stopped at all four sides of the tower with views facing, north, south, east, and west. At each location our guide pointed out significant landmarks and gave us interesting backstory and trivia about each site. It was entertaining enough that we could remember most of the details for the rest of our trip, and anywhere we went we could point out the landmarks and remember the most important facts about each location. We definitely felt more comfortable and familiar with the city after the tour, like we had already been in Paris for a few days. A great introduction to the city! 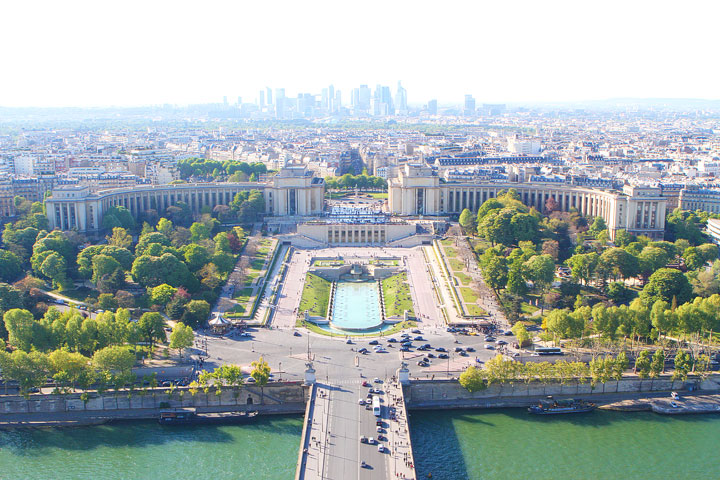 This was our view looking northwest over the Seine river, towards the Trocadéro Gardens. 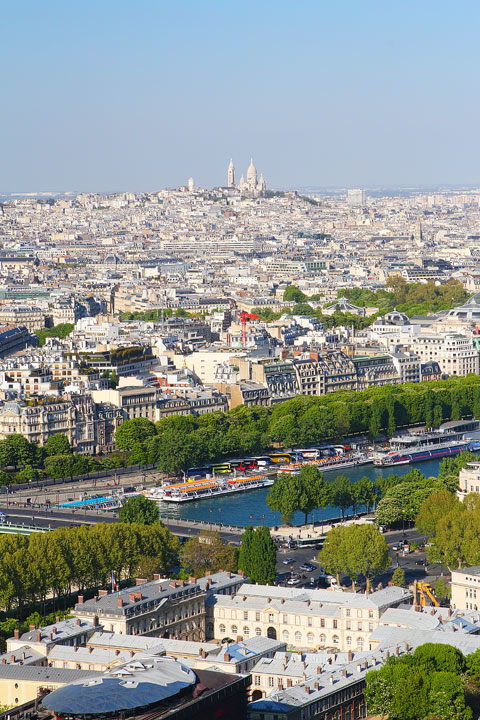 And our view looking northeast to the Sacre Coeur, the highest point in the city. 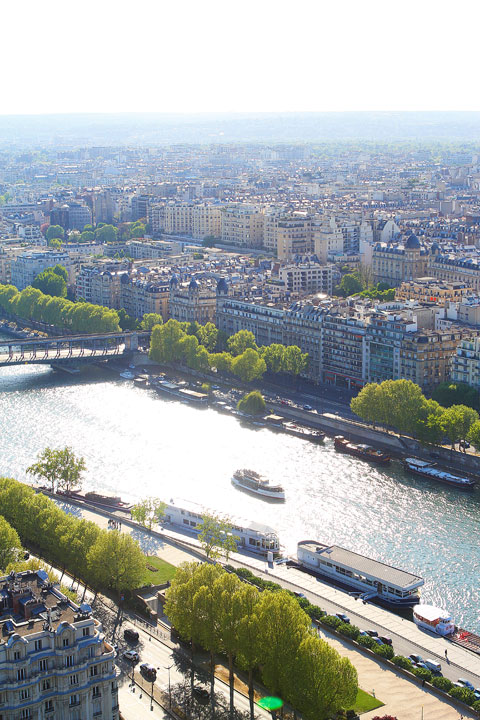 Looking west towards the Pont de Bir-Hakeim, a double-decker bridge over the Seine. 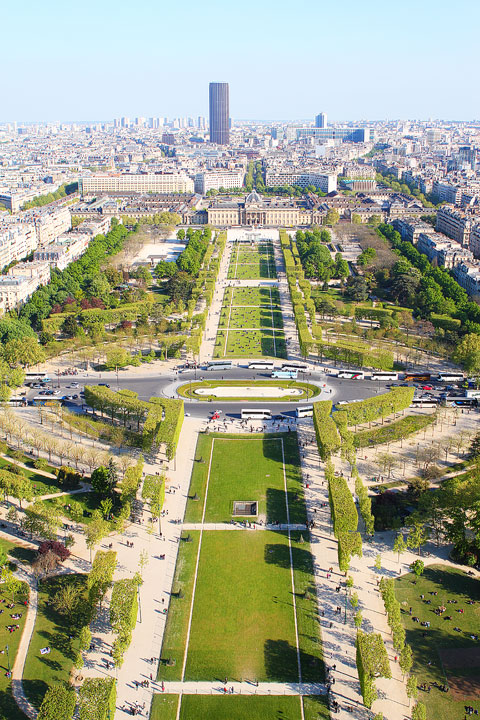 This was our view looking southeast over the Champ de Mars, and towards the École Militaire at the end of the lawn. You may notice that one lone, tall black building that sticks out like a sore thumb in the Paris skyline. Our tour guide told us a funny anecdote about this building. Back in the late 60s and early 70s, Paris decided it wanted to have a financial district, so they constructed this building, the Montparnasse Tower. At 689 feet with 59 floors, it was the tallest skyscraper in France until 2011. However, because of its stark contrast to Paris’ urban landscape, it received massive amounts of criticism for its monolithic appearance. As a result, two years after its completion, buildings over seven stories high in the city center were banned. There is a terrace on the top floor that’s open to the public for viewing the city. Our tour guide said that the view from the top is the most beautiful in Paris, because it is the only place from which the Montparnasse Tower cannot be seen! 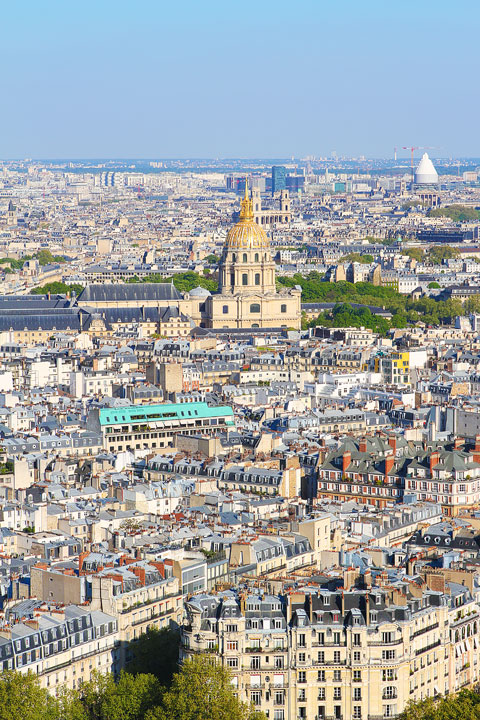 Here is the gold dome of Les Invalides, our view looking east from the Eiffel Tower. Les Invalides was commissioned by Louis XIV as a hospital for soldiers. It’s also the burial site for Napoleon Bonaparte, along with other notable French war heroes. 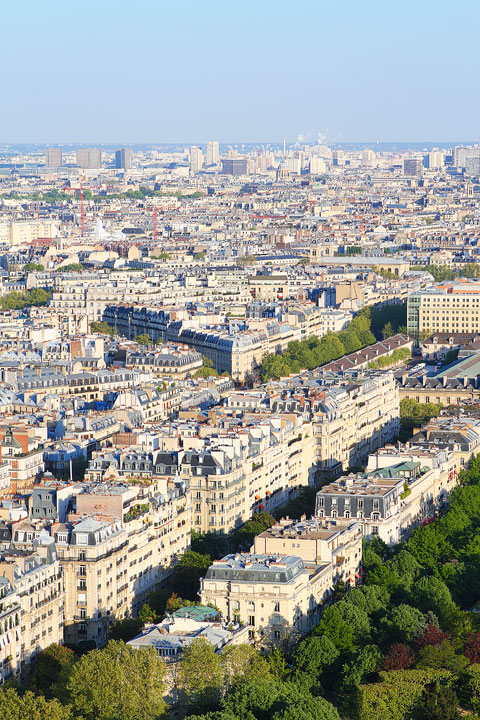 We also had a direct view of our hotel looking southeast from the Eiffel Tower. See those buildings in the middle of the photo above that seem to form a point directly towards the Eiffel Tower? 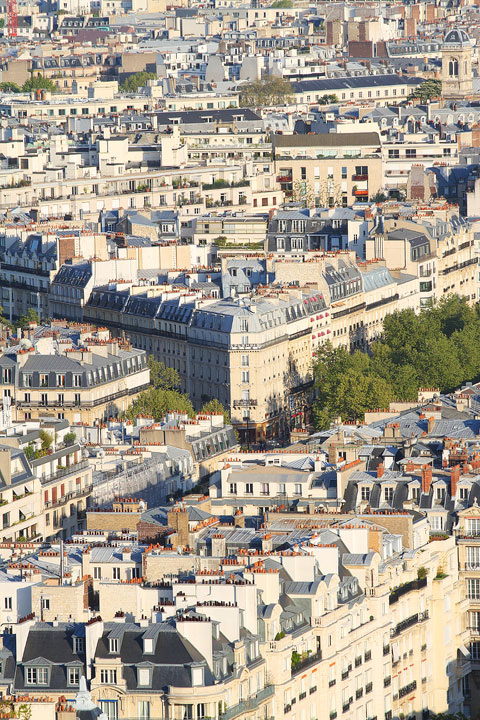 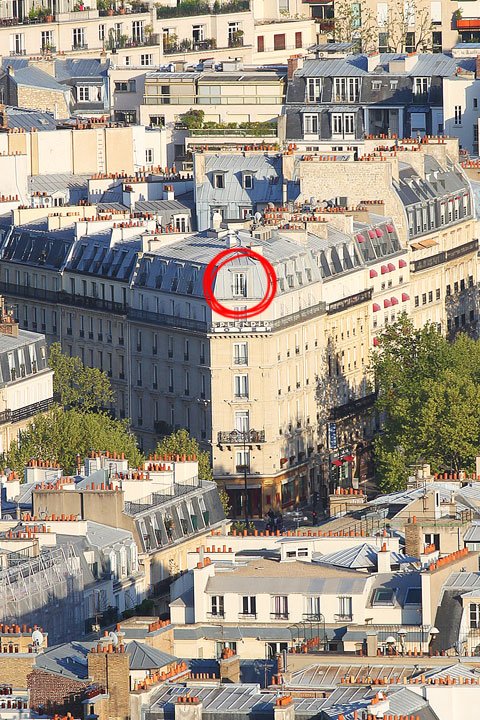 That was our room right there! I’ll be sharing more about our hotel in a later post. Stay tuned! :) 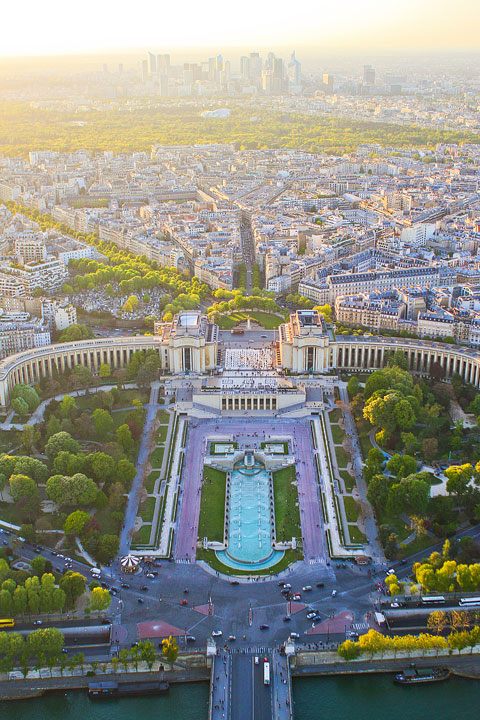 We gazed out over Paris as the sun set over the city. See those tall buildings at the top of the photo? Paris did end up getting its financial district here at La Défense, located just outside the Paris city limits to get around the 7-story height ban. :) 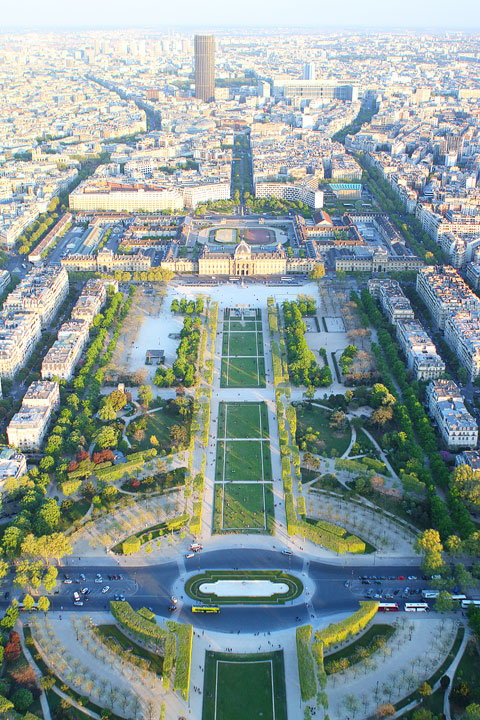 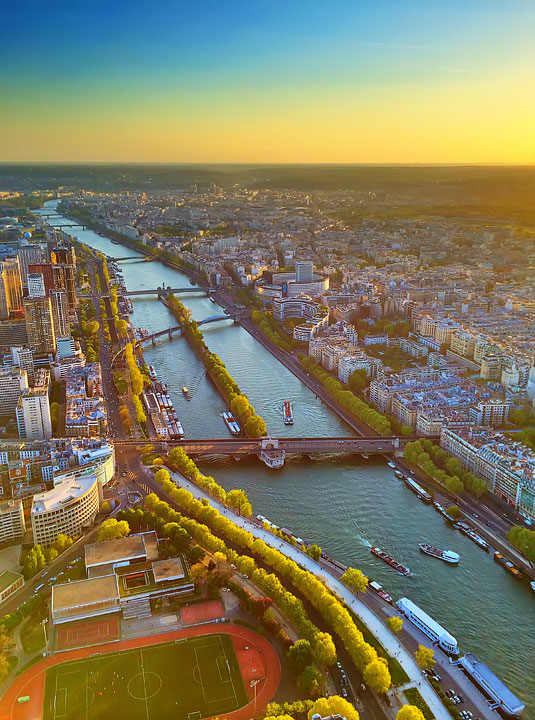 Sunset over the Seine and the Île aux Cygnes (Isle of the Swans). A notable feature of the Île aux Cygnes is a one-fourth scale replica of the Statue of Liberty, located at the far end of the island. The statue initially faced east toward the Eiffel Tower, but was turned west in 1937 towards New York City. Now the two sisters are gazing at each other across the ocean. 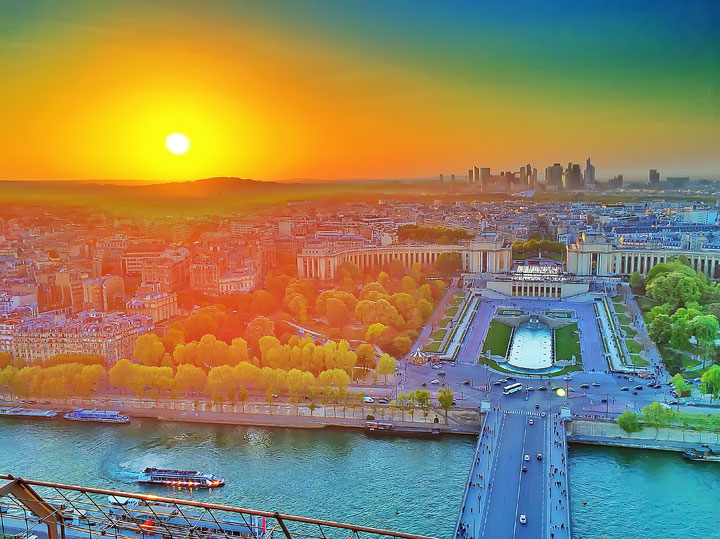 The Eiffel Tower at Sunset

We kissed at sunset on the top of the Eiffel Tower on our first night in Paris. 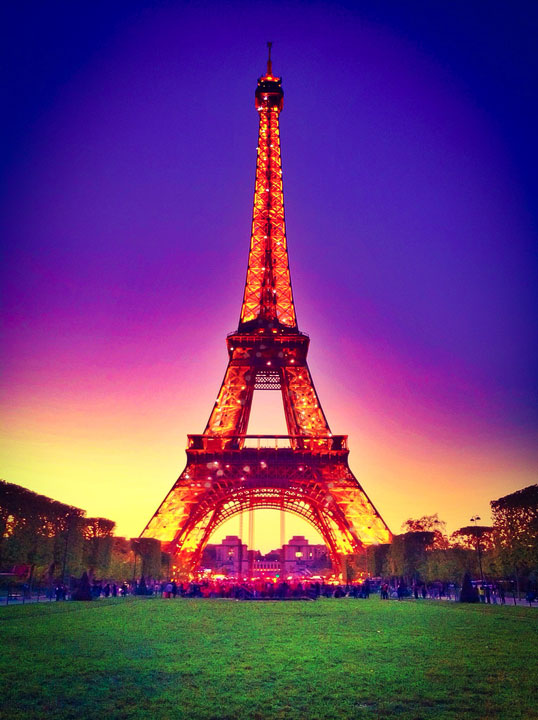 I snapped this with my phone as we walked back to hotel, just after sunset, as the twinkling lights lit up the Eiffel Tower for the night. 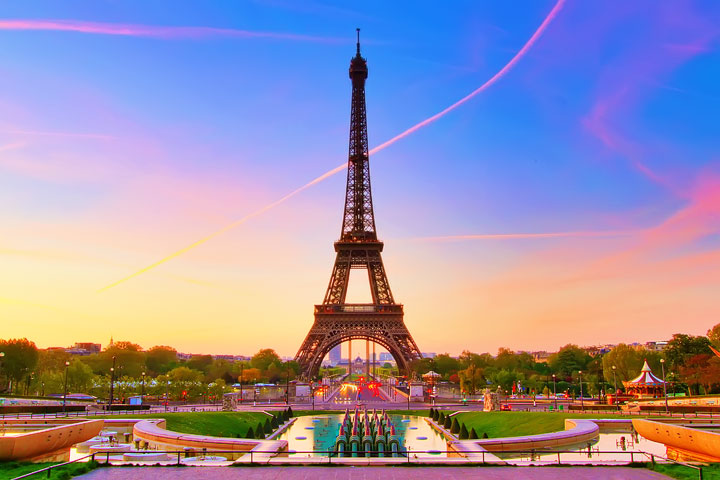 The next morning we watched the pink sunrise over the Eiffel Tower. 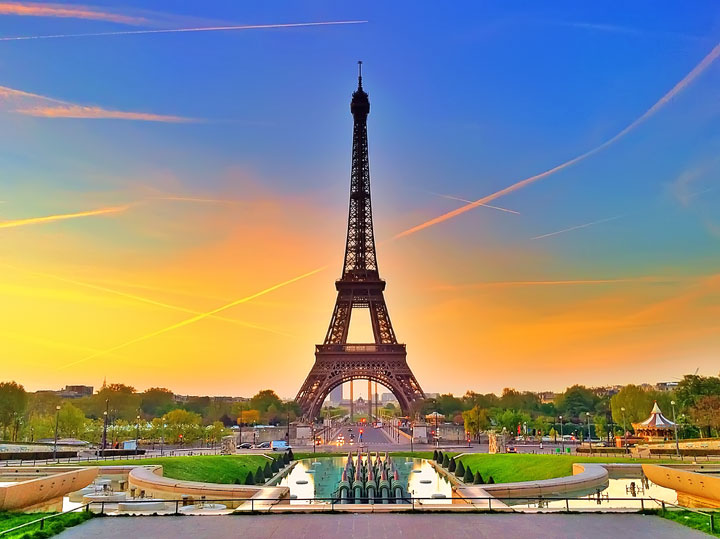 As the day dawned, the sky turned from pink, to gold, to bright vibrant blue. 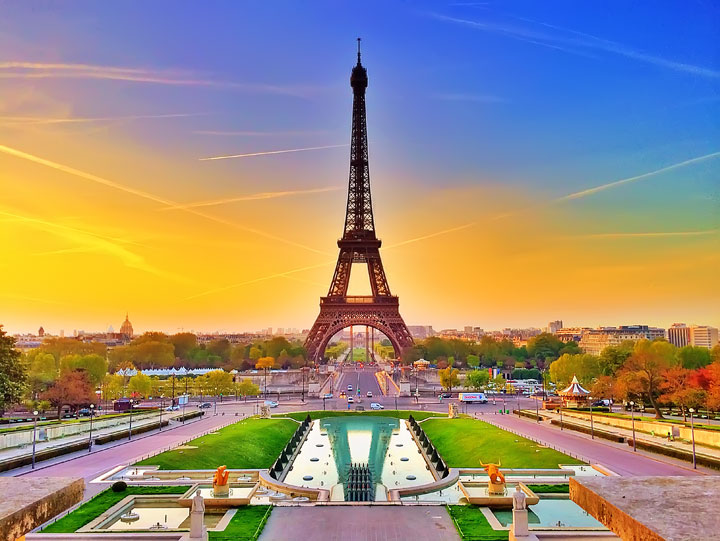 You guys know how much I love sunset photos, so when planning our trip to Paris I searched for the “best sunset views” in Paris. Unfortunately I couldn’t really find a good one that included the Eiffel Tower. However, there was a pretty decent sunrise view, as you can see from the photos above. These pictures were taken from the Trocadéro, a platform built specifically for viewing the Eiffel Tower. And the best part of taking photos at sunrise?? There aren’t zillions of other people in the photo! ;) 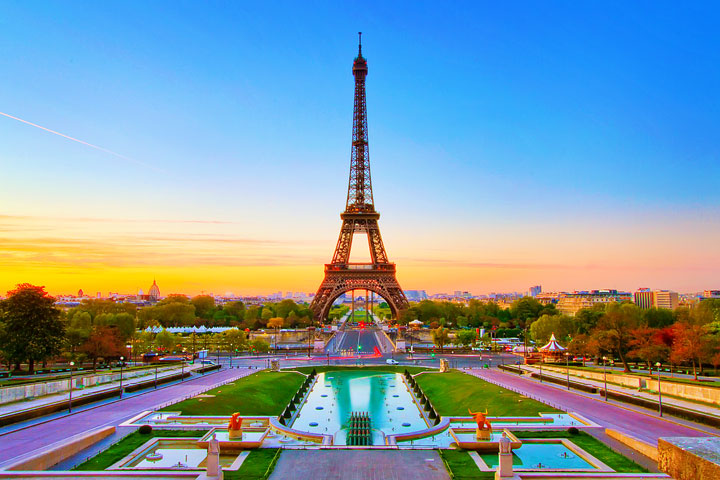 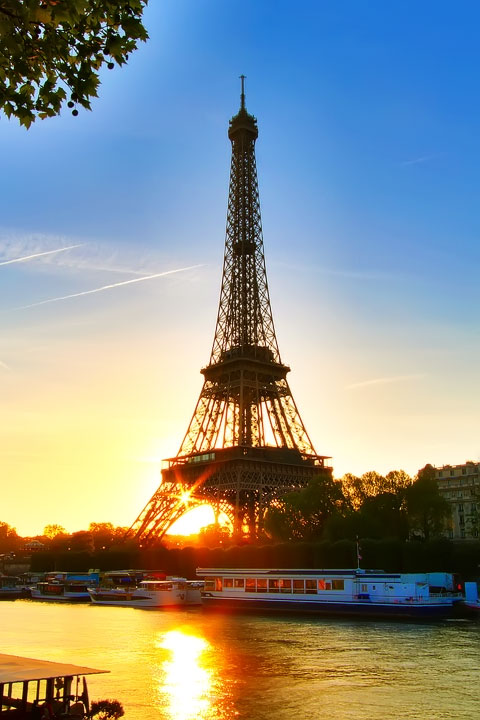 We walked along the Seine at sunrise, holding hands and day dreaming about the future. 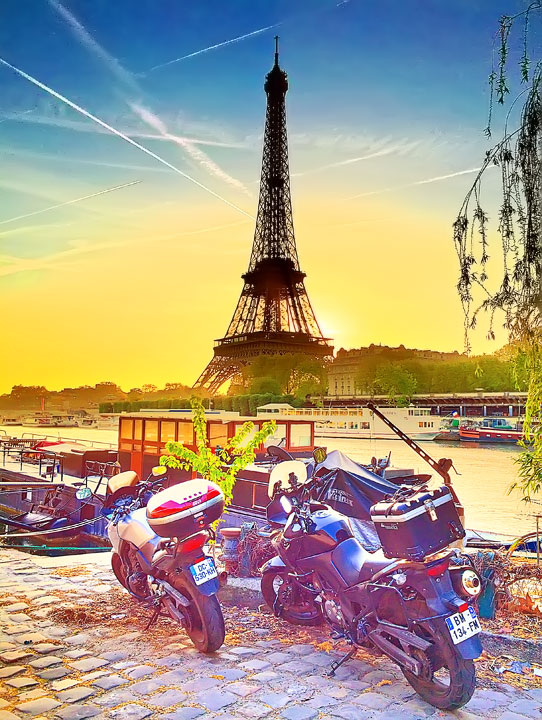 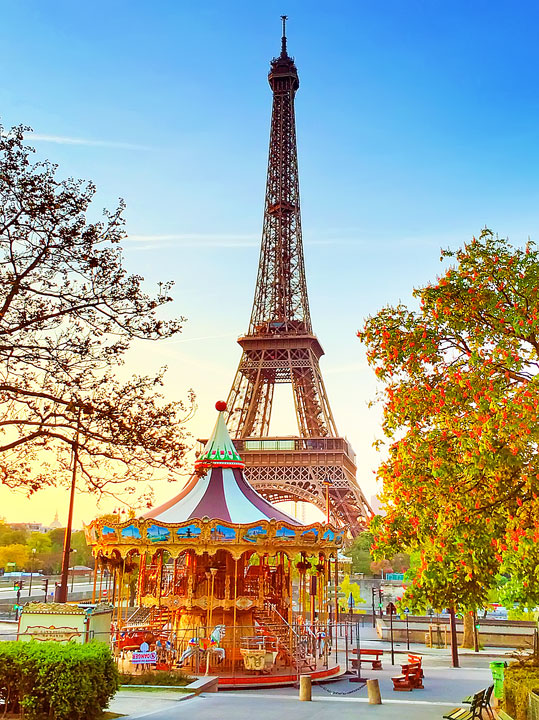 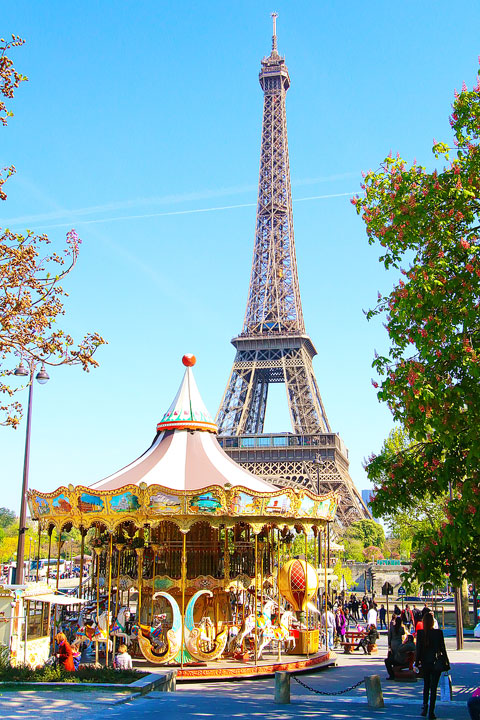 And then later in the day. A pink carousel in Paris. 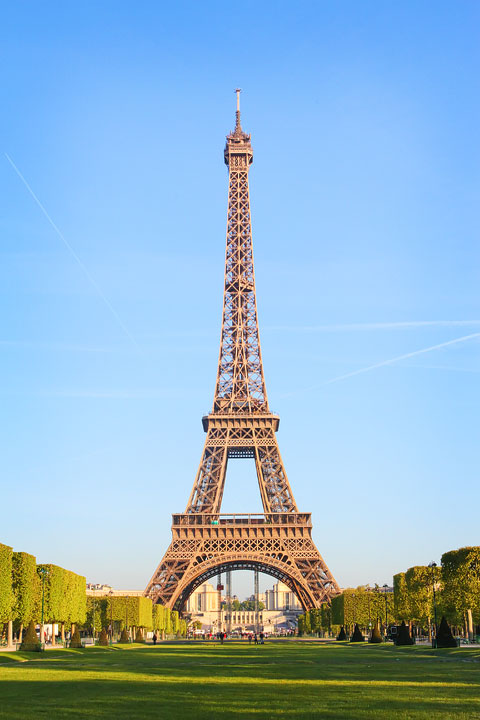 Paris… I love you!

View Paris in a larger map

Here’s a map of everything we did in Paris. It’s got the GPS location of all the spots you see in this post in case you want to find them on your own. :) Click here to see this map on a larger screen, with a list of all the places we went.

More From Our Magical European Getaway!

Where to Go in London

What to Do in Paris