Weekend getaway in the mountains . . .

We’re back! :) Last weekend we celebrated our 7th wedding anniversary and spent the weekend tucked away in a cozy cabin in Helen, Geogia. The town of Helen is the re-creation of a German alpine village- complete with cobblestone alleys, quaint village shoppes, authentic bakeries and restaurants, and old-world towers. Its quiet location on the Chattahoochee River, nestled in the Blue Ridge mountains, was the perfect spot for our long weekend getaway. :)

I took 2 cameras with me on this trip- my Canon XTi with the 24-70 2.8 L lens and a Sony DSC-H20, a small point a shoot for when I wanted to snap a quick pic and didn’t want to drag out the big camera.

If you’re interested in seeing more information about any of the pics below, like which camera I used, you can click on any of the pictures and it’ll tell you what camera I used and, if it was the Canon, which settings I used, like aperture, shutter speed, etc. 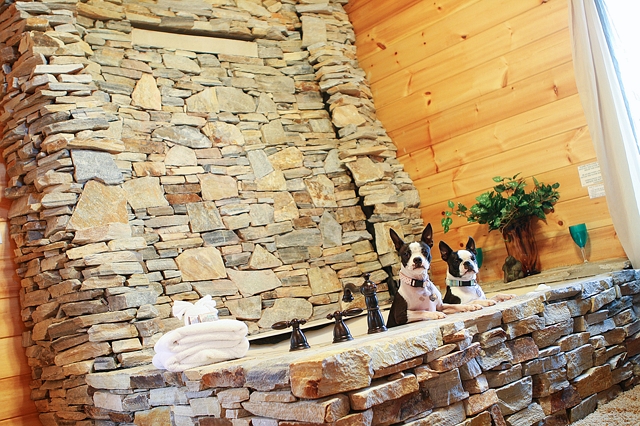 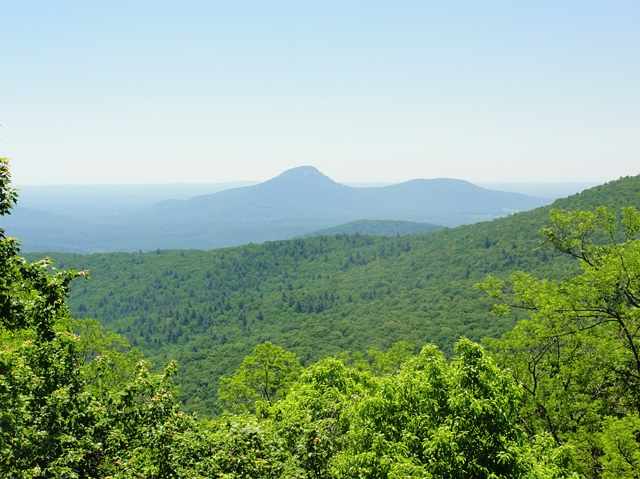 One of the peaceful views near our cabin. 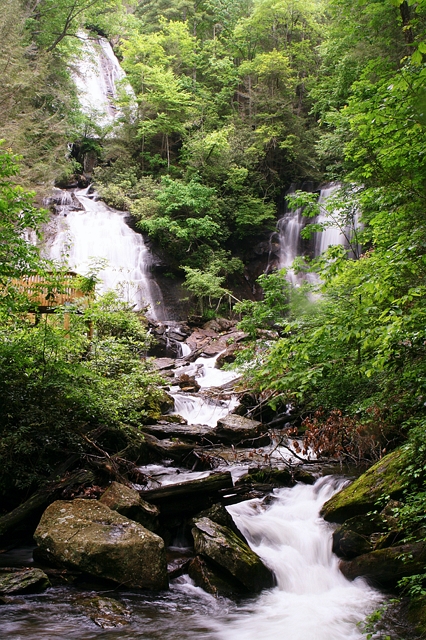 On our first morning in Helen, we went to Anna Ruby Falls. 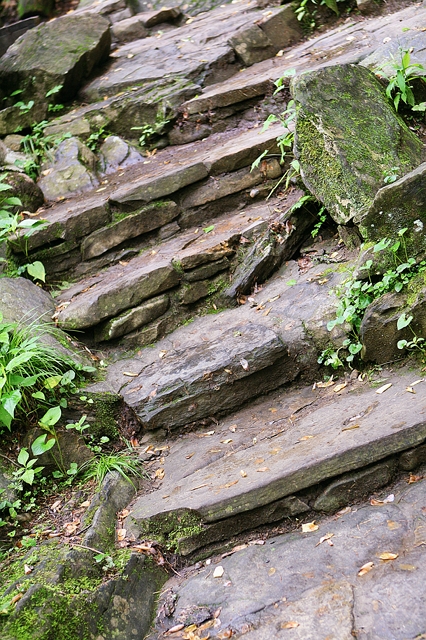 The path to the falls was very pretty, and a nice, easy walk. 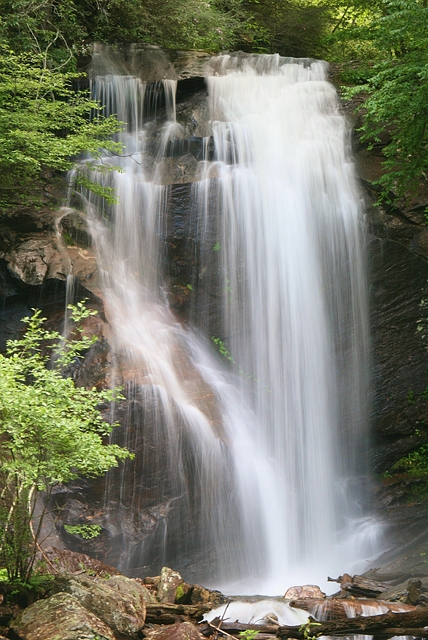 One of the twin falls- this is the one on the right. I’m not sure if this is Anna or Ruby. ;) 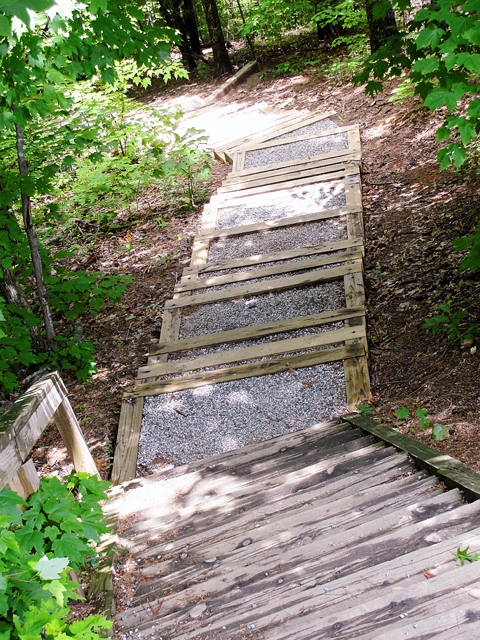 That afternoon we took the puppies on a hike around the lake at Unicoi State Park. It was a beautiful 2.5 mile hike, and there were lots of places to stop and take in the scenery. 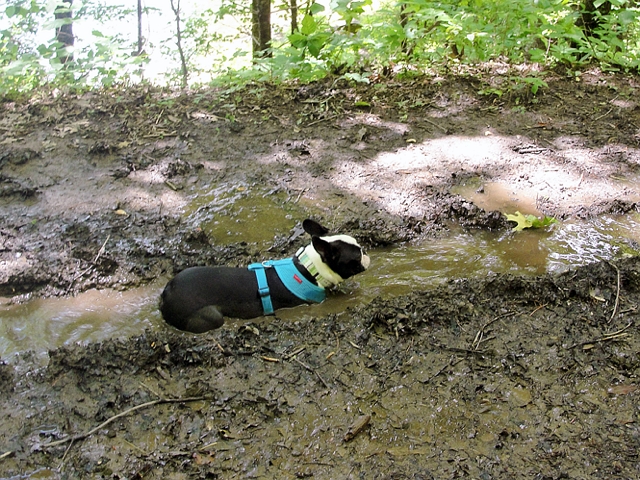 Within 5 seconds of being on the trail, Howie finds a mud puddle. And what does he do? Of course he has to lay down in it! :p 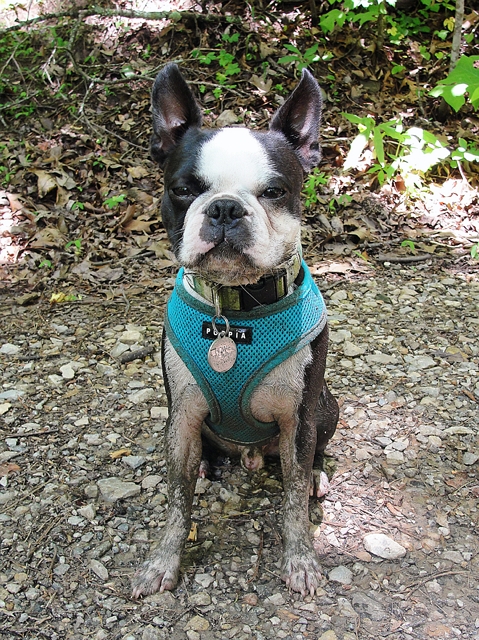 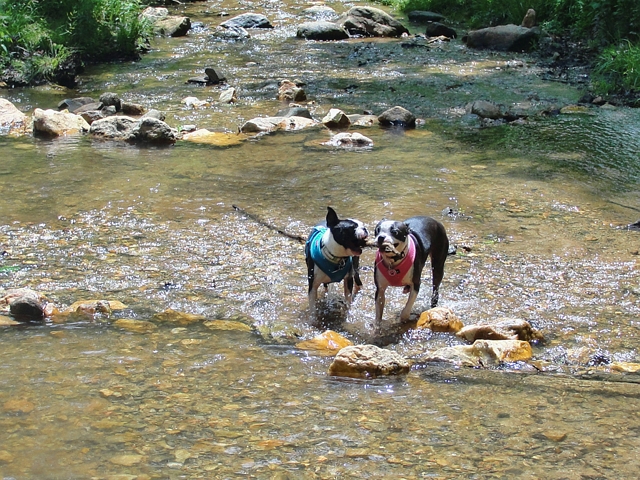 Fortunately, later in the trail, there was a creek for the puppies to play in (and wash off in!!) 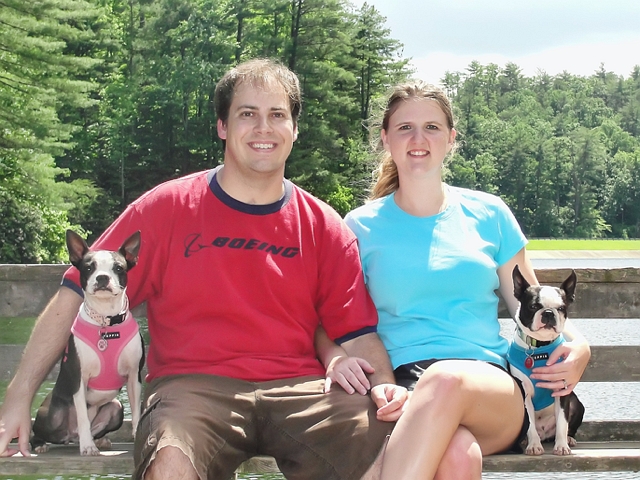 See? This is a little bit later on the hike. All clean! :) 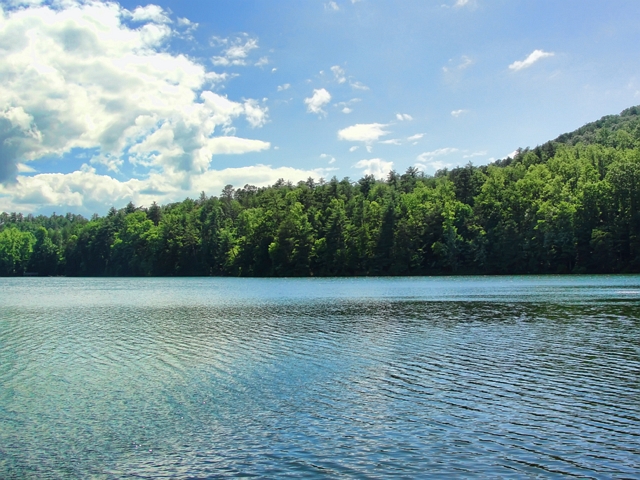 The lake was gorgeous! :) I kept wanting to rent one of the paddle boats, but we ran out of time. :p 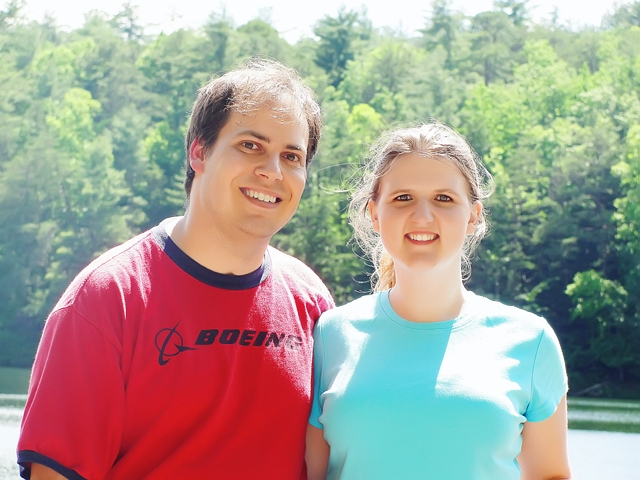 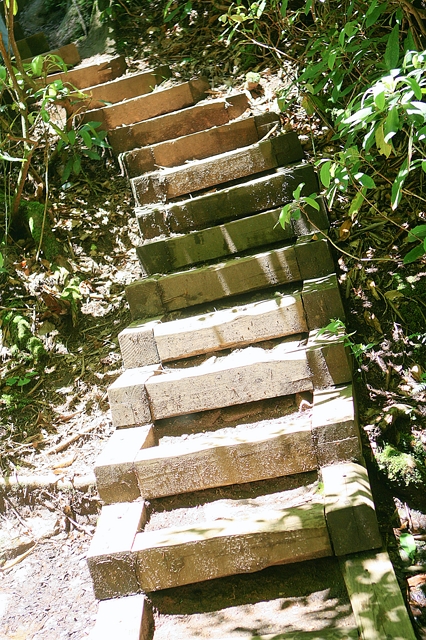 The next day was Helton Creek Falls- it was a very short path to get down to the falls, and it had these cute little stairs that took you right down to the base of the falls. :) 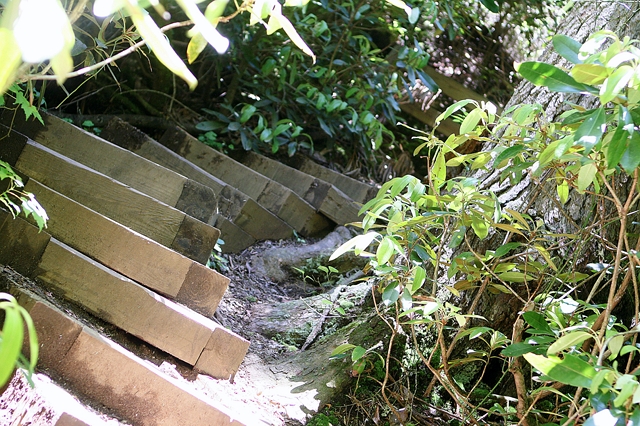 We spent the morning just lounging by the creek, throwing sticks for the dogs to fetch, and watching the cascades of Helton Creek falls. It was nice and warm later that afternoon, so we rented some tubes and went tubing down the Chattahoochee river!! :) I really wanted to take my camera so I could get a pic of us tubing, but I’m glad I didn’t now- we got SOAKED!! :) I’m not sure the camera would’ve made it. :p But we had fun. :) 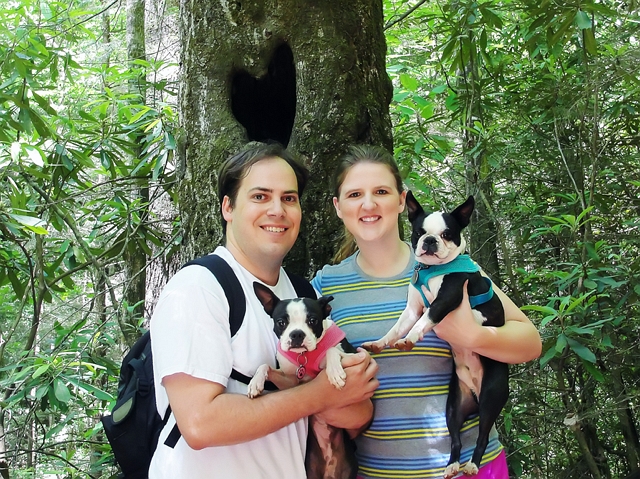 On our last full day in Helen, we did a longer 5 mile hike up the Raven Cliffs Falls Trail. Early in the hike we came across this heart tree and had to stop for a pic! :) 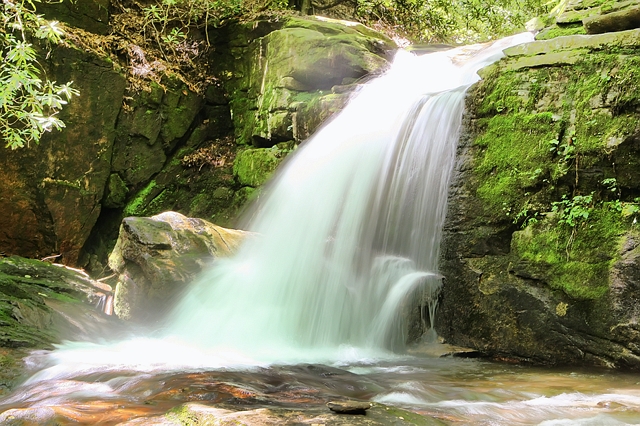 This was one of the falls we came across on the trail. You could get down the base and wade around in the water and also get up to the top and sit on the rocks atop the falls. 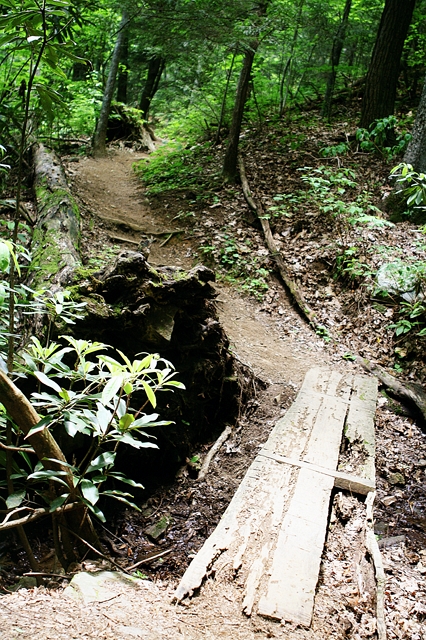 The Raven Cliffs Falls is a beautiful trail- lots of these little bridges to cross. 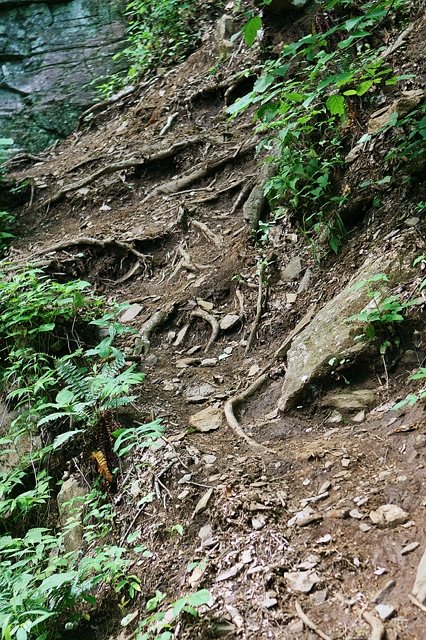 And Lots of rocks and gnarled roots to maneuver too. 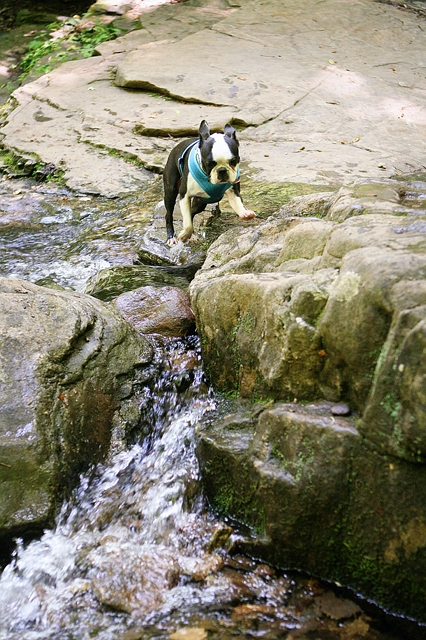 Howie bravely crosses the Dodd Creek along the trail. 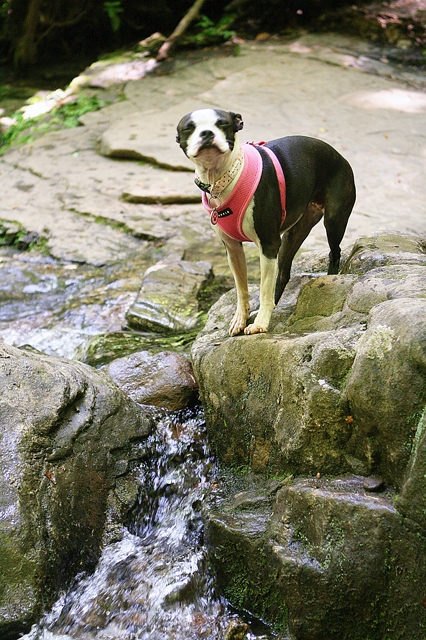 But Miley refuses to come down until someone comes and gets her. ;) 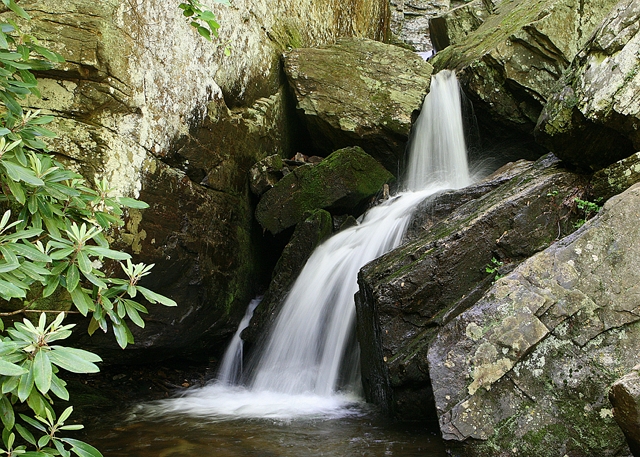 One of the upper falls along the trail. 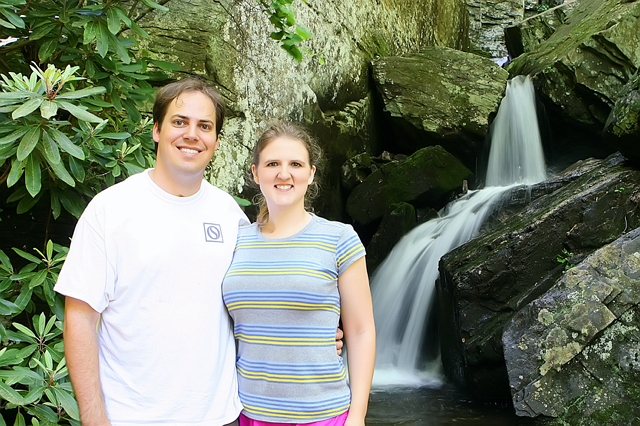 This was a very peaceful, tucked away hiding place. We took a break here before going back! :) 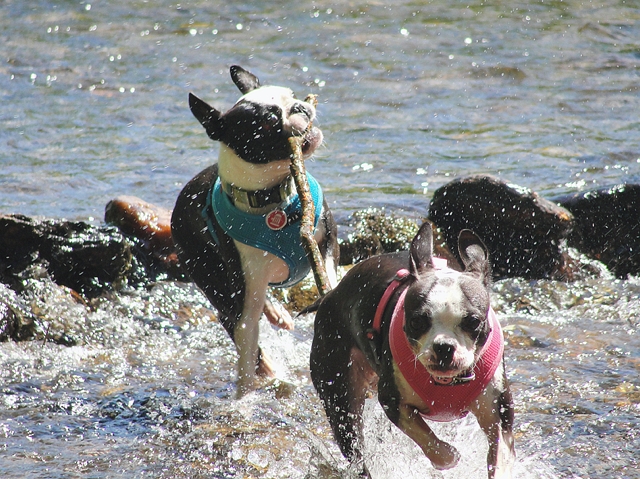 On our last day before leaving Helen, we took the puppies down to the Chattahoochee River and let them play in the water, fetch sticks, and try to catch the passing tubers. ;)

This trip was my first chance to really get to use the Sony DSC-H20 and overall I was pretty pleased with it. Macro mode wasn’t all that impressive- it had a hard time focusing on close up subjects and didn’t really blur the background all that much. The HD video is awesome though. Another cool feature was smile shutter. I could turn it on, set the camera on a rock or something, get in the pic, and when we both smiled, it automatically took the pic. And if we blinked, I didn’t even have to set it up again. If we smiled again, it took another pic without me having to get up and mess with the camera again. Sweet! We used that a *lot*! :) Of course it wasn’t perfect… It had a hard time detecting smiles in low light and from far away, and sometimes even in perfect lighting and perfect closeness to the camera we’d smile… and smile…. and smile really, really, big… And nothing. Then as soon as we’d give up… It snapped the pic. LOL. Of course. But overall it did work really well. :) It has a decent zoom (10x optical), but the camera was still small enough for Kevin to carry around in his pocket while we were hiking. Probably my favorite thing about the camera was “Easy” mode. In Easy mode, it automatically detects whether you’re taking a picture of a landscape, a portrait, macro, back lit, and probably some other modes that I didn’t notice, and it adjusts the settings for that particular pic. It worked great- I kept it on Easy almost the whole time (except when the puppies were playing in the creek, then I put it on Sport/Action). Oh, one more thing- I like how it snapped the pic really fast- not a huge lag like on some digital point and shoots.

Hope you liked the pics! :D Thanks so much for looking!! :) 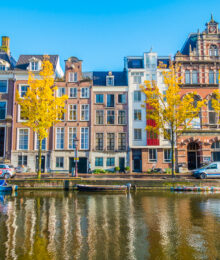 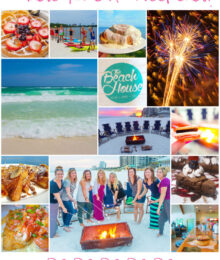 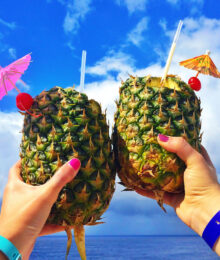 A Week in the Caribbean, Part 2 {Atlantis, Bahamas}