Planning a trip to Jordan? If you’re looking for the best things to do in Jordan, here are the most popular sites you can visit as a day trip from Amman, the capital of Jordan. You can see the actual spot where Jesus was baptized, and where God showed Moses the Promised Land. 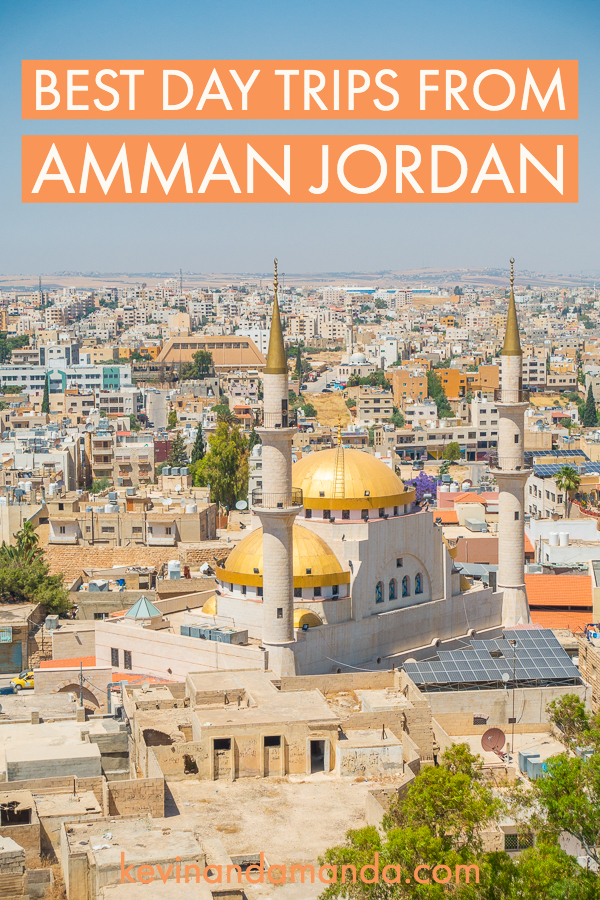 If you’re going to Jordan, you will probably fly in and out of Amman, the capital of Jordan. The Amman airport is the main airport in Jordan. If you’re wondering how many days to spend in Amman, I recommend at least 3 full days in Amman — one day to explore Amman, and two days for day trips from Amman to see some of the historic sites near the capital of Jordan.

To help plan your time in Amman, here are the two day trips we recommend:

The Best Day Trips from Amman:

Keep reading below for more information on these sites. 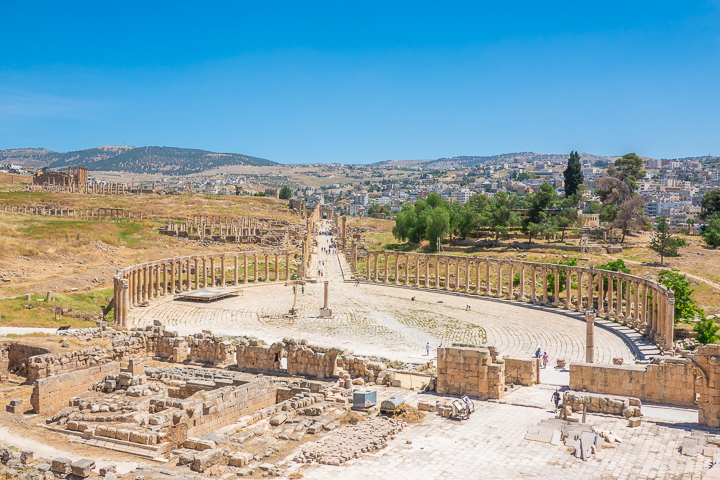 The ancient city of Jerash is one of the largest and most well-preserved Roman cities in the world. It’s located just 45 minutes from Amman. 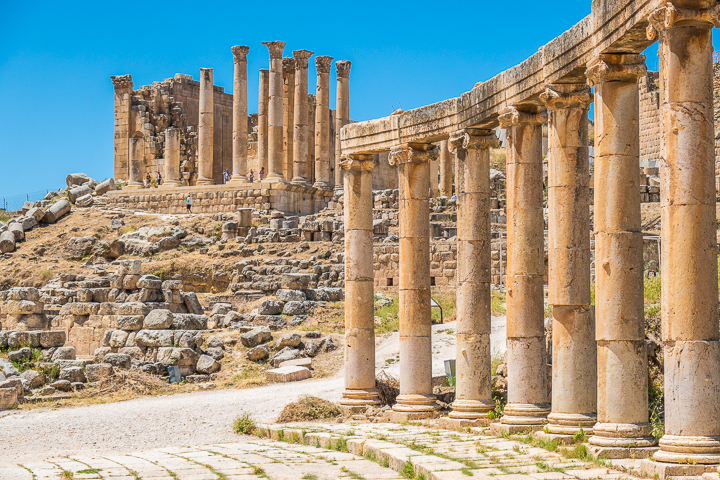 What You’ll See At Jerash 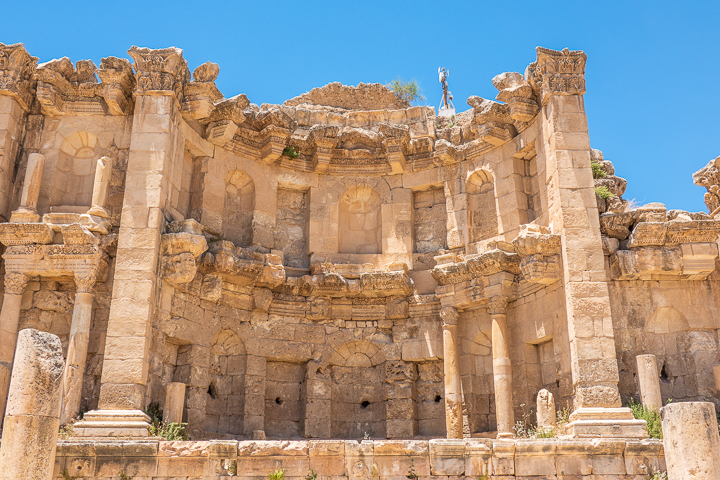 One of the highlights of Jerash is the Nymphaeum, the main water fountain of the ancient city. It was fed by a Roman aqueduct and supplied water to the entire city. 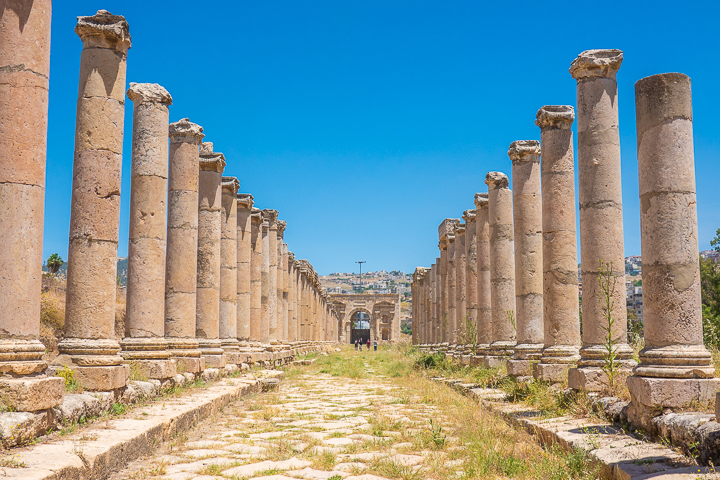 The main street of Jerash is nearly 1/2 mile long and runs the entire length of the city. It’s lined with tall columns and the city’s major building, shops, and homes were once located on this street. Look for chariot tracks in the stone paving! 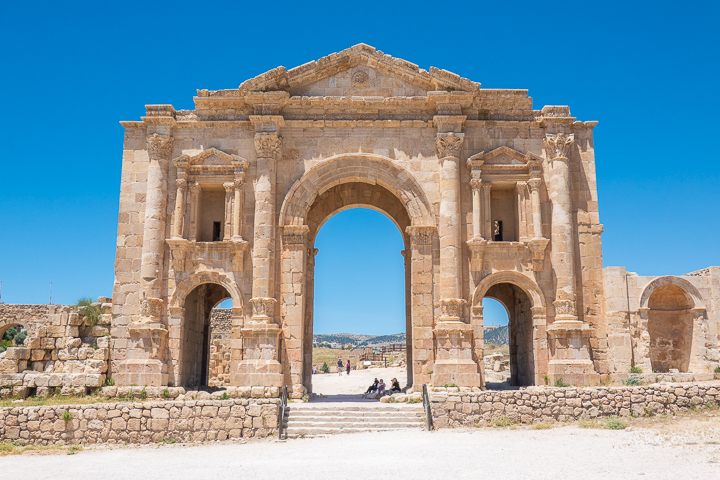 This large, ornamental gate was built almost 2,000 years ago in 129 AD to celebrate the Roman Emperor Hadrian’s visit to Jerash, who would have traveled over 2,100 miles from Rome to visit. 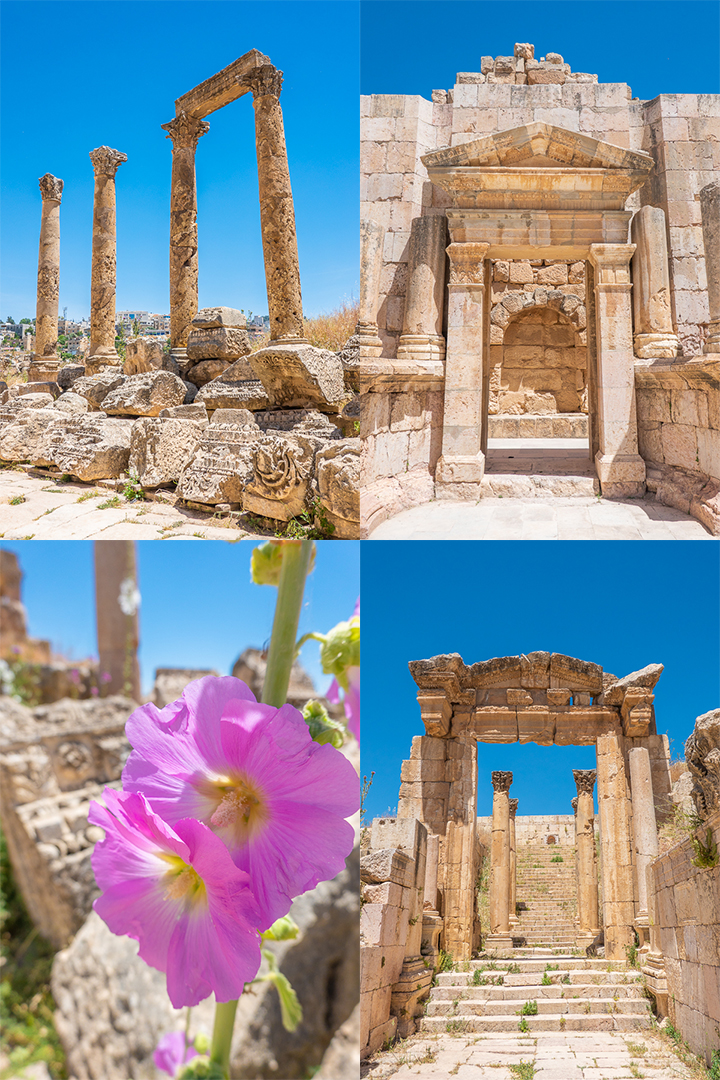 There’s so much more to see at Jerash — gates, temples, theatres, public squares, churches, and more! These are just a few of the highlights. It’s definitely one of the best day trips from Amman that you can take. 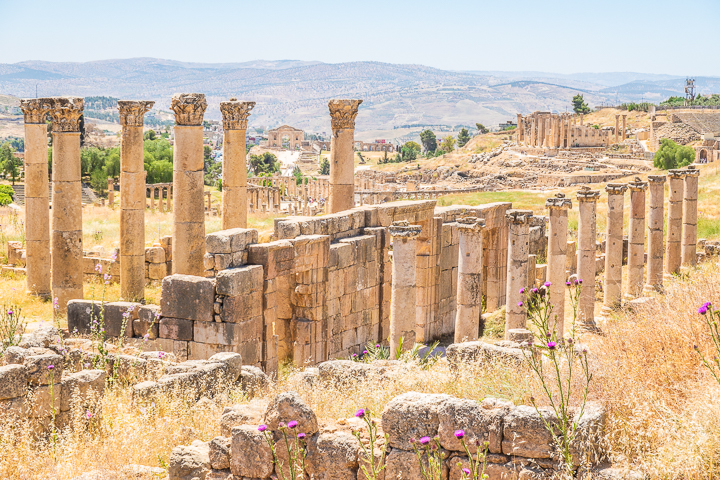 How Long To Spend At Jerash

Jerash is a huge site, so plan for a minimum of 3-4 hours to see the whole thing. 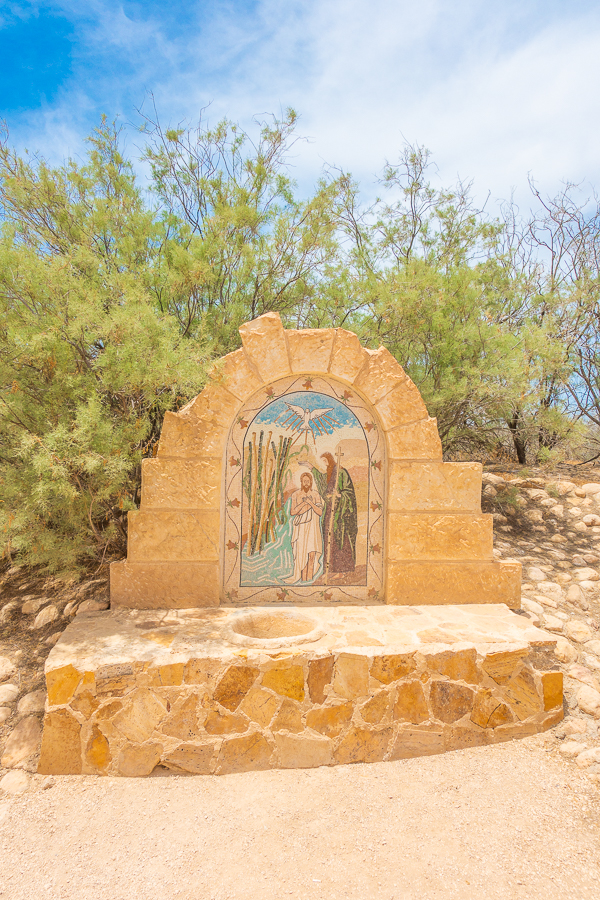 For your second day trip from Amman, start your day at the Baptism Site of Jesus Christ. It’s located just 1 hour by car from Amman.

Jordan is an important site for Christian believers. Many significant Biblical events took place in Jordan, the most historic being the baptism of Jesus Christ.

“This all happened at Bethany on the other side of the Jordan, where John was baptizing.”

According to the Bible, John the Baptist was baptizing “on the other side” of the Jordan river, meaning the Jordan side. 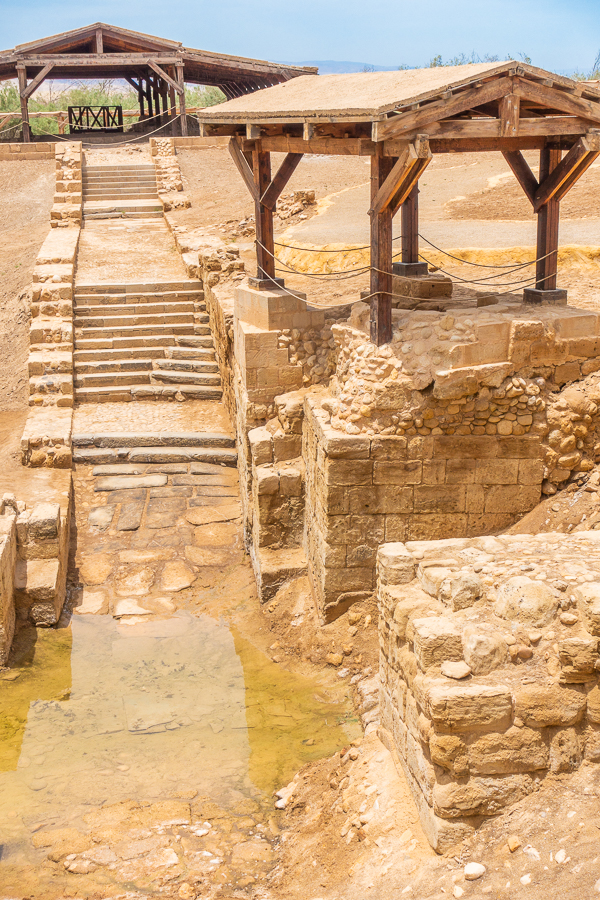 The baptism most likely took place in springs on the eastern side of the Jordan River, because the river was more powerful and dangerous for baptisms.

“Then Jesus came from Galilee to the Jordan to be baptized by John.”

This site pictured above is believed by most scholars to be the authentic location for the Baptism of Jesus.

You can see it is very, very dry now! 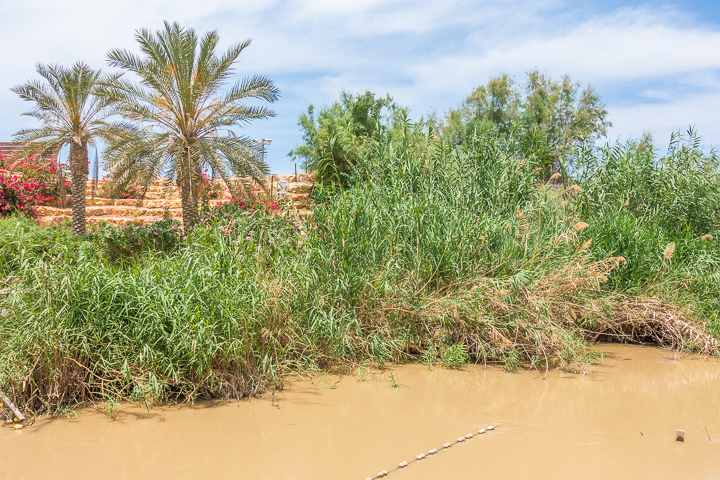 Here is the Jordan River today. It is much dryer than it once was. The Jordan River defines the border between Jordan and Israel. Just a few feet away on the other side of the rope is Israel.

The Israel side is much more popular for tourists, but according to the Bible Jesus was baptized on the Jordan side. 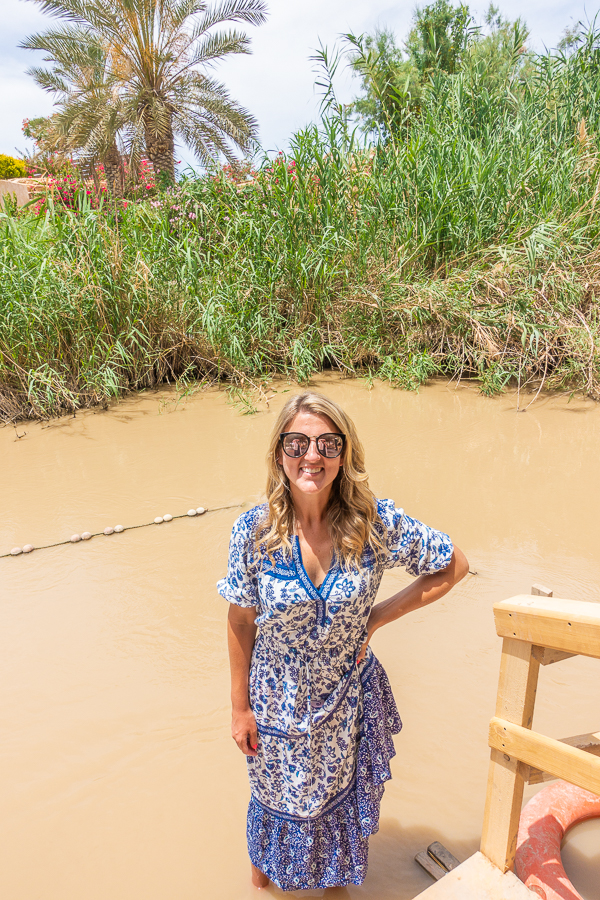 You Can Get Baptized In the Jordan River 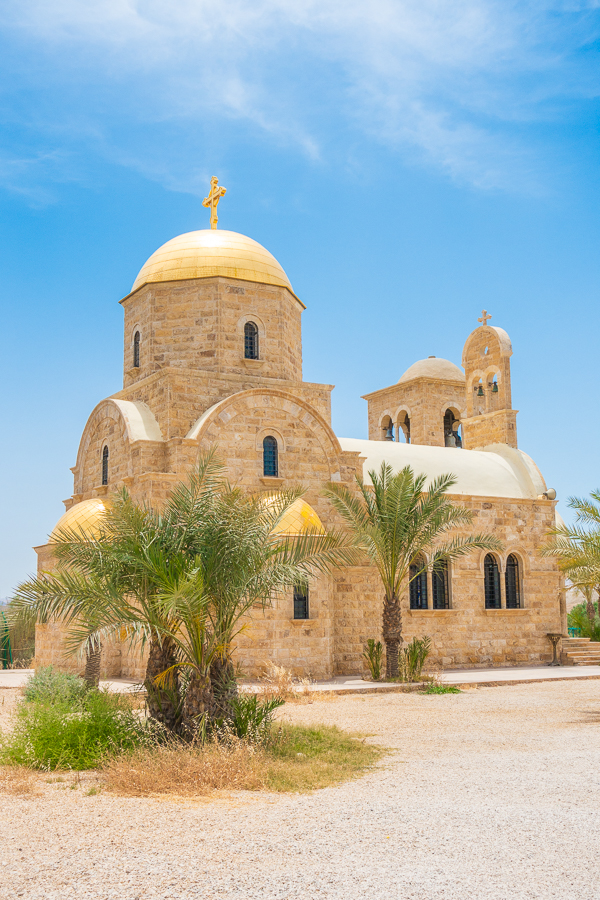 Tips for Visiting Bethany Beyond the Jordan

Visiting the Baptismal Site of Jesus is highly regulated since it’s so close to the border with Israel. 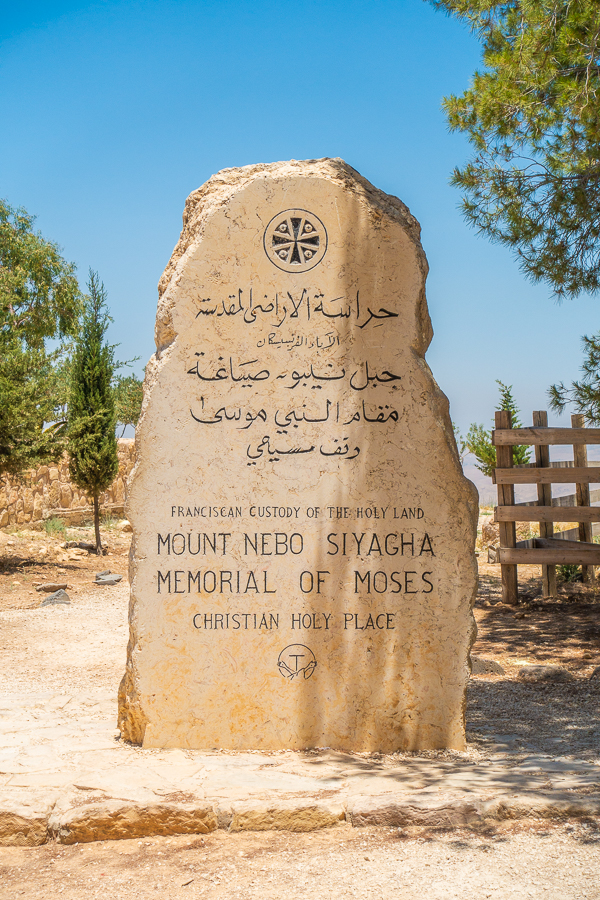 God promised Abraham that there would be a Promised Land for the descendants of his son, Isaac, a land flowing with “milk and honey”

“And I have promised to bring you up out of your misery in Egypt into the land of the Canaanites, Hittites, Amorites, Perizzites, Hivites and Jebusites — a land flowing with milk and honey.”

After Moses (a descendant of Isaac) led the Israelites into the desert after their Exodus from Egypt, he sent 12 men to scout out the promised land. Unfortunately, all but 2 of the men brought back negative reports, saying the cities were too fortified and the people living there were too strong and too big — there was no way they would be able to conquer the cities.

As a punishment for not having faith that the Lord would give them the land he promised, God sentenced the Israelites to wander in the desert for 40 years, until almost that entire generation of men had died.

“But as for you, your bodies will fall in this wilderness. Your children will be shepherds here for forty years, suffering for your unfaithfulness, until the last of your bodies lies in the wilderness.”

“So the men Moses had sent to explore the land, who returned and made the whole community grumble against him by spreading a bad report about it— these men who were responsible for spreading the bad report about the land were struck down and died of a plague before the Lord.”

Where Is The Promised Land?

“Then Moses went up to Mount Nebo from the plains of Moab and climbed Pisgah Peak, which is across from Jericho. And the LORD showed him the whole land, from Gilead as far as Dan;” 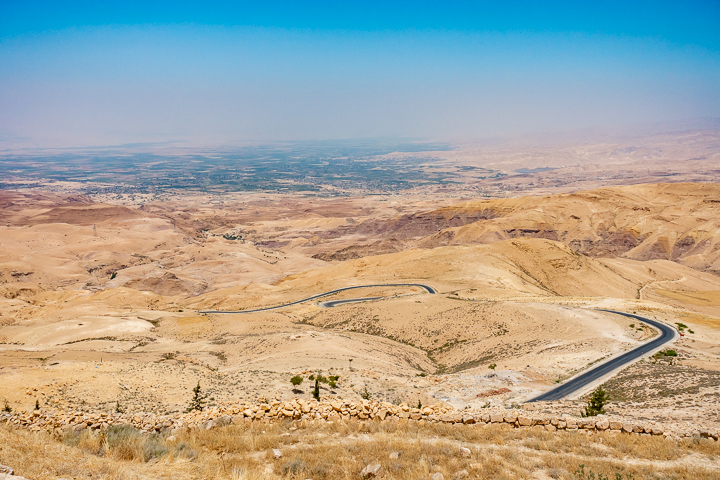 Then the LORD said to Moses, “This is the land I promised on oath to Abraham, Isaac, and Jacob when I said, ‘I will give it to your descendants.’ I have now allowed you to see it with your own eyes, but you will not enter the land.”

It is very dry now, but it would’ve been much more green and lush then.

What is the Promised Land?

When you stand at the top of Mount Nebo you can see, just as Moses did, the Dead Sea, Jericho, Bethlehem, and the Mount of Olives in Jerusalem. 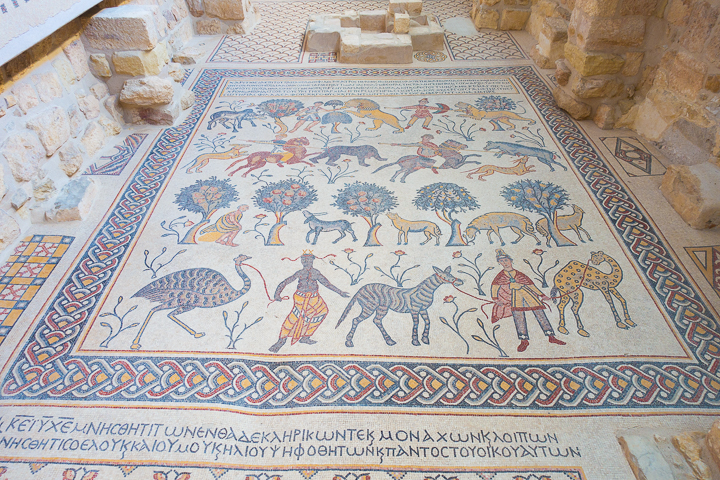 Mount Nebo is believed to be where Moses was buried, and it became a place of pilgrimage for early Christians. A church was built at the top of Mount Nebo between 300-400 AD to commemorate the final burial site of Moses.

Pictured above is a very large, extremely well-preserved mosaic floor in the church from 530 AD. 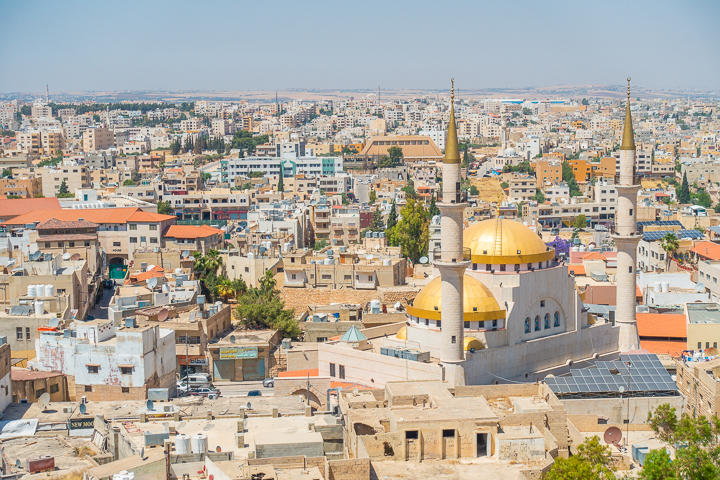 After a morning visiting the baptism site and Mount Nebo, head to Madaba for the afternoon. Madaba is only 15 minutes by car from Mount Nebo.

There are two main sites in Madaba to visit: 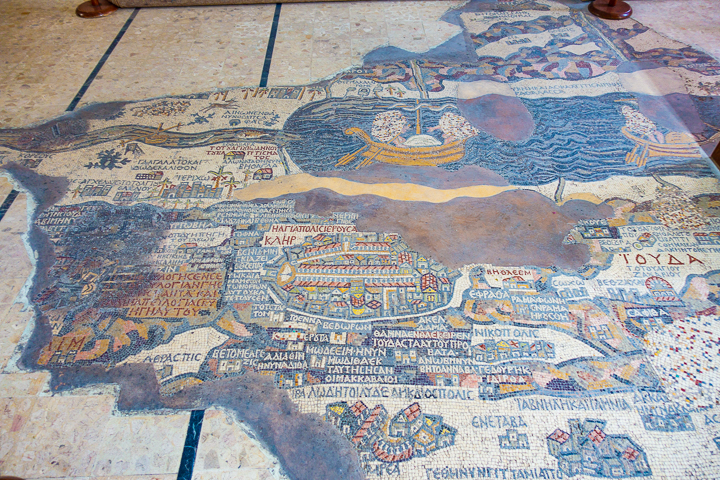 In this church located less than 1 hour from Amman, you can see a very old, large mosaic map from the 500s that depicts Jerusalem, Bethlehem, the Dead Sea, Jordan River, Jericho, Jacob’s Well, Mount Sinai, and the Mediterranean Sea. 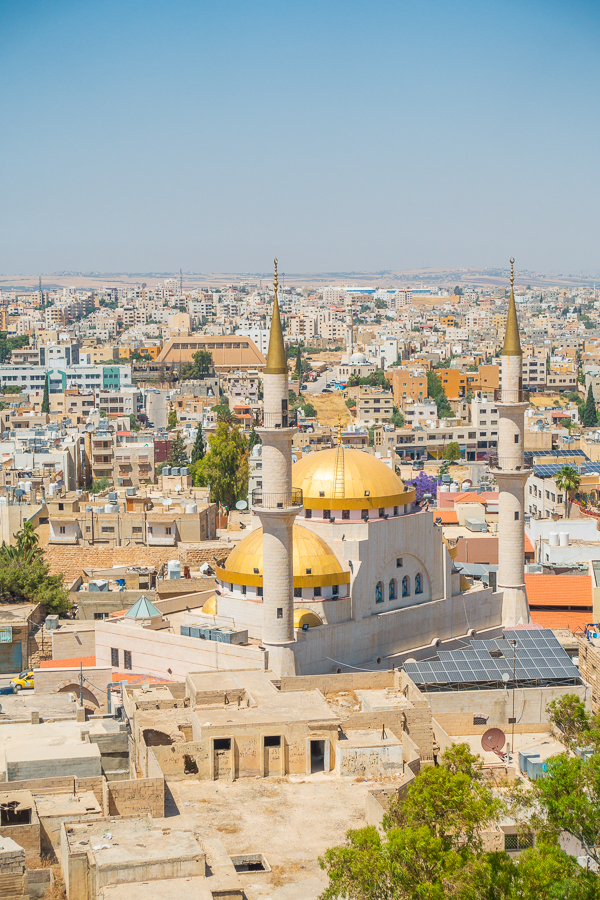 In 1967 the Vatican recognized this church in Madaba as a Shrine of the Beheading of Saint John the Baptist and urged believers and pilgrims to visit this holy site.

The highlight of the church is the panoramic view of Madaba from the bell tower!

You can also visit the underground tunnels and foundations of the church, where there is indeed a shrine dedicated to the beheading of John the Baptist. There is also a well dating to the Moabite era (3000 years ago) that is still operational. Watch the video above to see!

After a full day exploring these biblical sites, it’s time to return to Amman. Madaba is about 40 minutes by car from Amman. 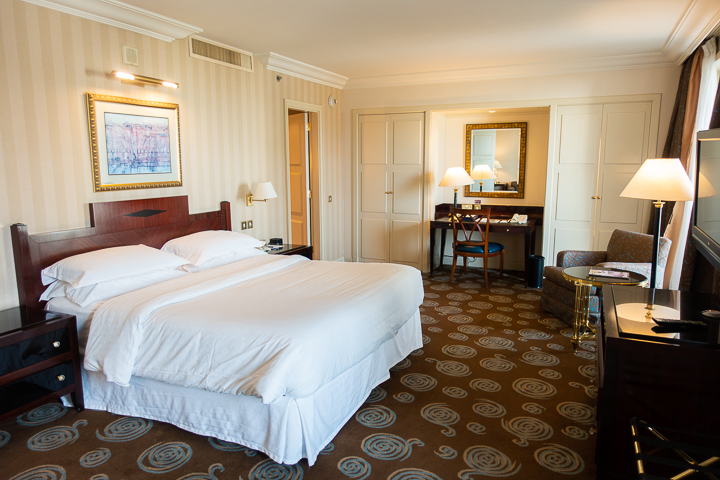 If you’re looking for the best hotels in Amman, I highly recommend the Sheraton Amman Al Nabil Hotel. The rooms are spacious, the bed is luxurious, and the bathrooms are large and updated. The staff was friendly and helpful. The breakfast buffet is AMAZING!! The buffet offers a huge selection, and the freshly squeezed orange juice was the best we had in Jordan. It was definitely the best breakfast we had in Jordan. They also offered to make us a typical Jordan breakfast so we could try it!

The Shine Spa & Gym at the Sheraton is one of the largest gyms in Jordan. They offer complimentary fitness and yoga classes to their guests. We tried a super fun interactive fitness class called Prama. The floor lights up and tells you what to do! Watch the video above to see! Afterwards you can go relax in the pool, jacuzzi, and sauna. 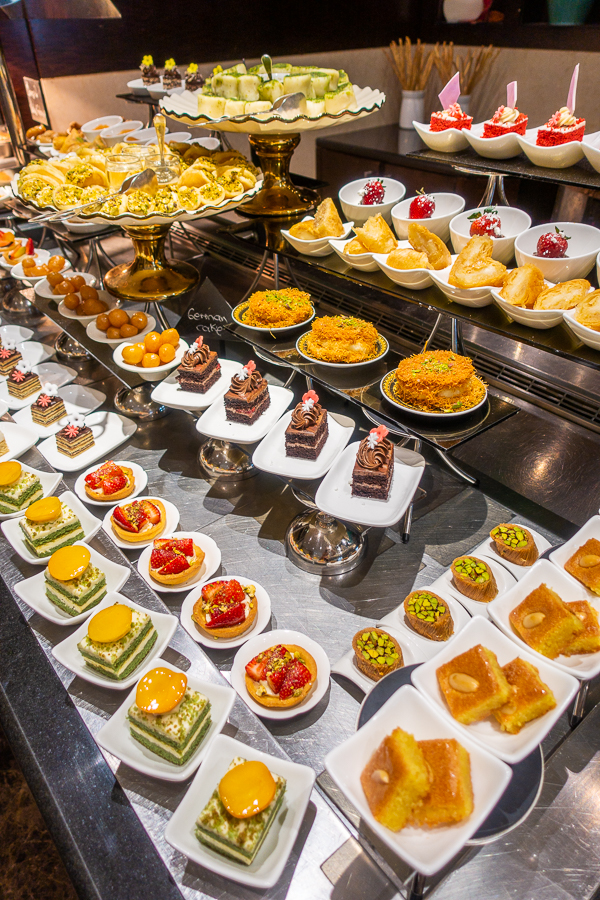 We visited Amman during their holy month of Ramadan. During this time they fast from sunrise to sunset (no food or water even in 100 degree heat). At sunset, they gather together for “Iftar”, the evening meal to celebrate the breaking of the fast. We had the opportunity to attend the Iftar buffet at The Spice Garden inside the Sheraton. It was such an amazing meal, everything was SO good!! Just look at the dessert station above! Highly recommend a meal at The Spice Garden at the Sheraton! 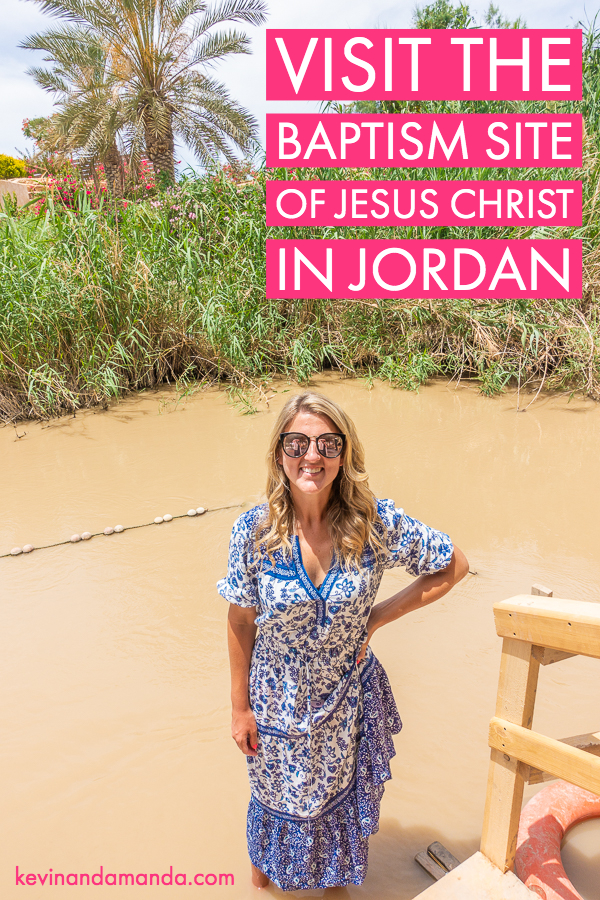 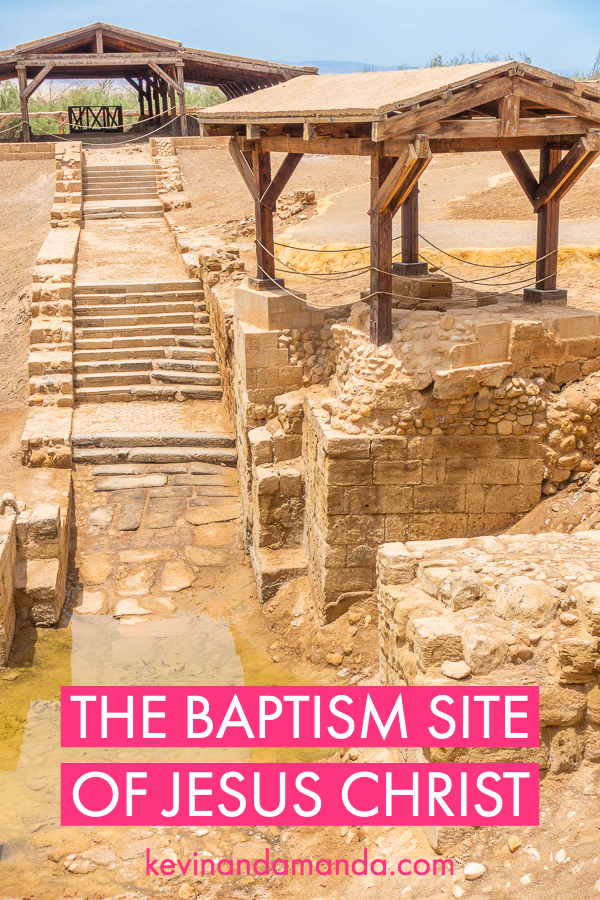