These Snickerdoodle Doughnut Muffins with Buttercream Frosting are so sweet and delicious! They’re snickerdoodle cookies in muffin form with frosting! 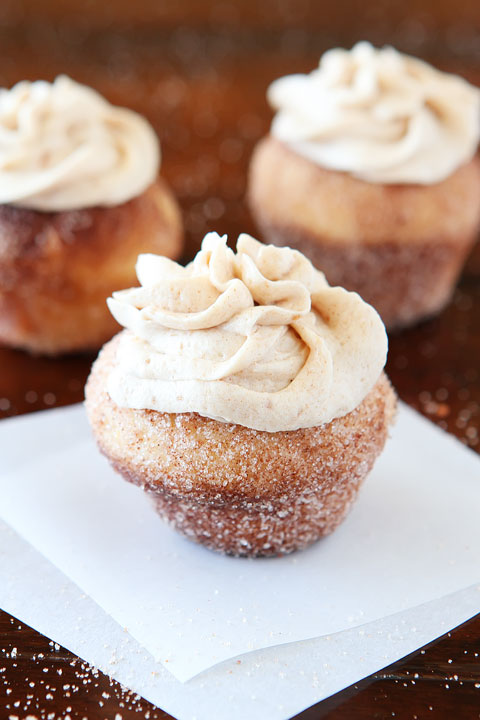 Are you getting tired of all my “Brown Butter” everything recipes lately???

If you just said yes, we can’t be friends anymore.

Just kidding. I totally still love you. Even my friend Kristen doesn’t like Nutella and we somehow make it work.

Last year I made these Strawberry Shortcake Doughnut Muffins for a Fourth of July party, and they were a MASSIVE hit with our neighbors. Even now, over a year later, everyone is STILL talking about them and asks for them every time we have neighbor nights.

This time, I decided to make them even MORE brown buttery fabulous, with Brown Butter Buttercream Frosting.

They’re pretty much the most amazing thing I’ve ever had in my entire life. 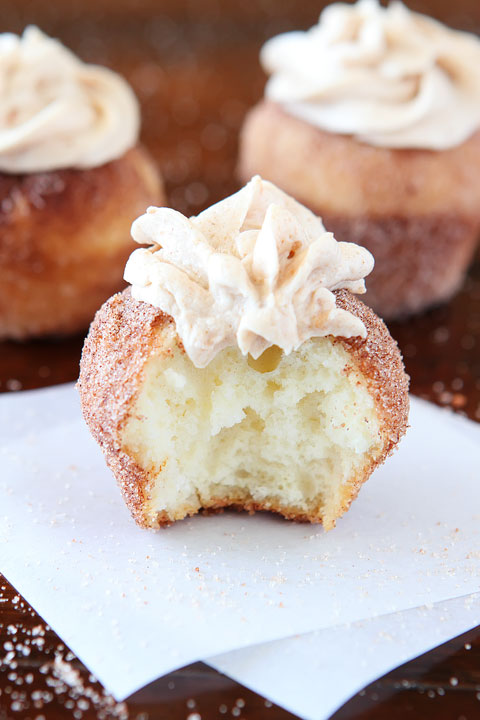 First, they’re sweet, melt-in-your-mouth, and pillowy like a doughnut.

Second, they have an addictive muffin-top texture on the outside, but doughnut muffins are way better, because they’re dunked in brown butter and rolled in cinnamon-sugar so that texture is ALL over the muffin, not just on top.

Then they’re topped with Brown Butter Buttercream Frosting to send them completely over. the. top.

Brown Butter Buttercream Frosting. You need to try it at least once in your life. 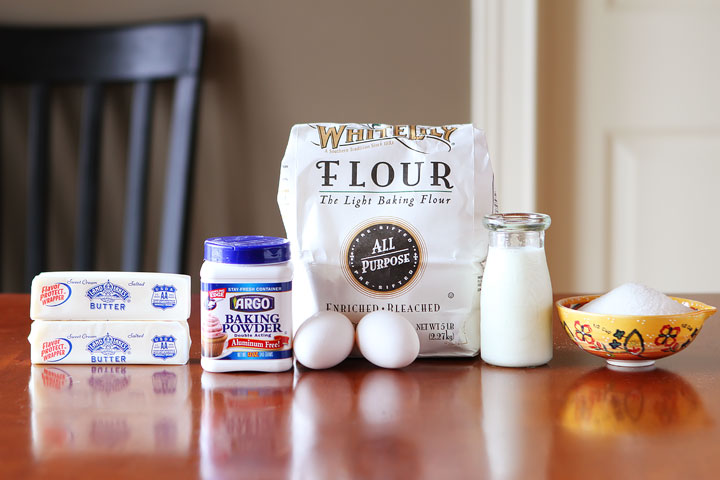 Here’s all you’ll need for the muffins: Butter, baking powder, eggs, flour, milk, and sugar. Please pretend like you also see cinnamon in this picture. Thank you for understanding. 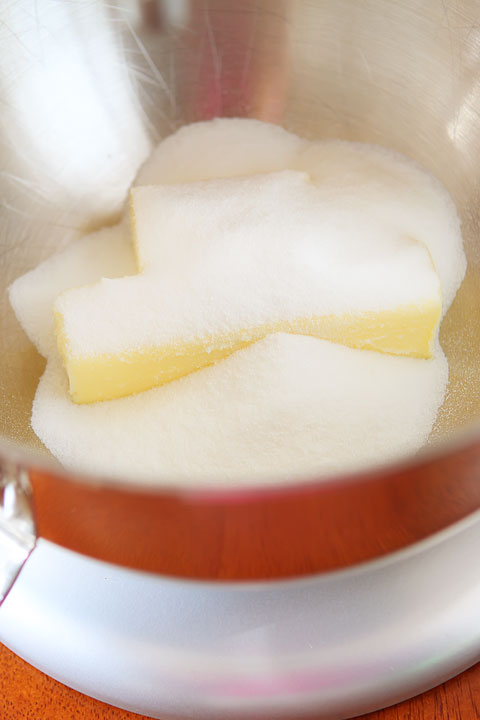 How to Make Snickerdoodle Doughnut Muffins

Add 1.5 sticks of softened butter and 3/4 cup sugar to a large mixing bowl, and beat on medium-high speed for 3-5 minutes. 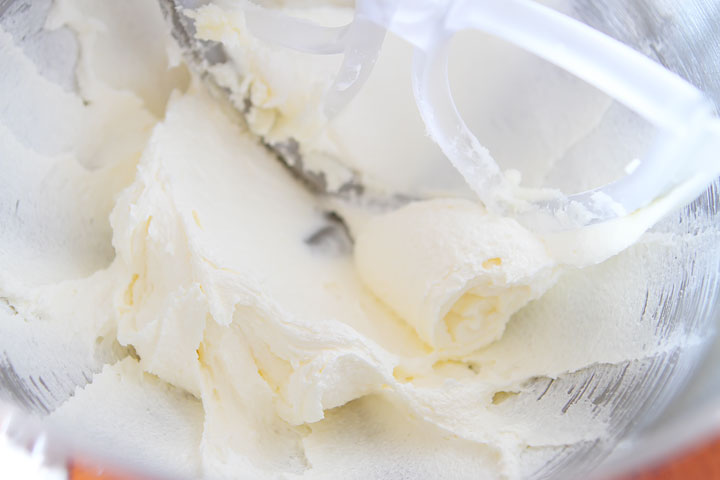 Until pillowy light and fluffy. 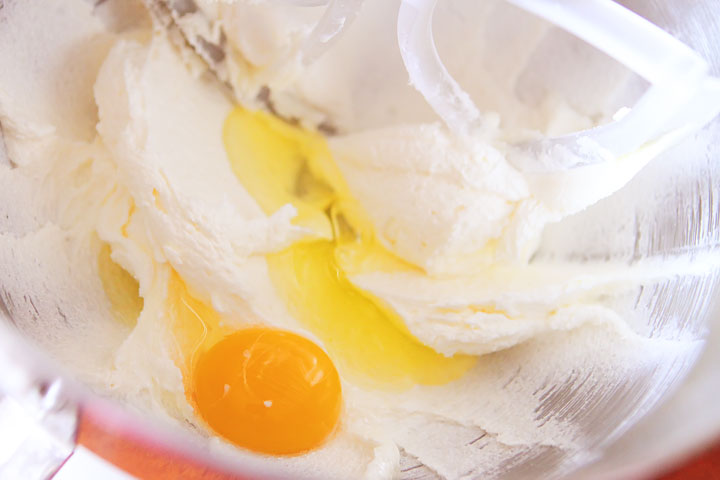 Add two eggs, one at a time, and beat until just mixed in. 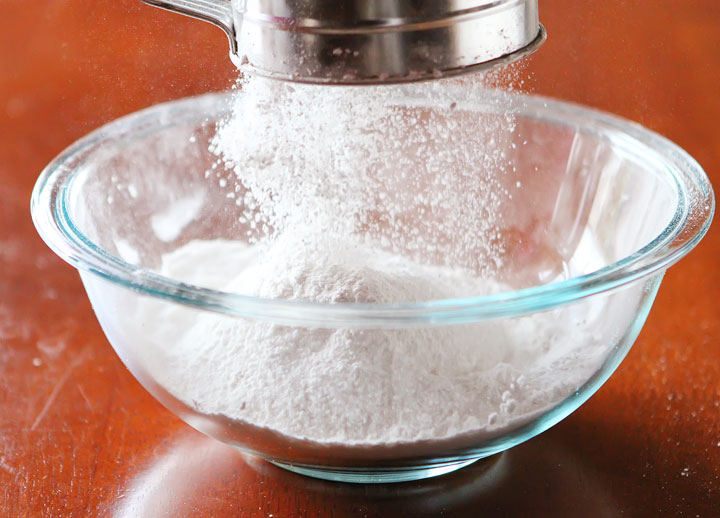 Meanwhile, sift together 3 cups flour, 1 tablespoon baking powder, and 1 teaspoon salt. You can also just whisk them together if you don’t feel like breaking out the sifter. 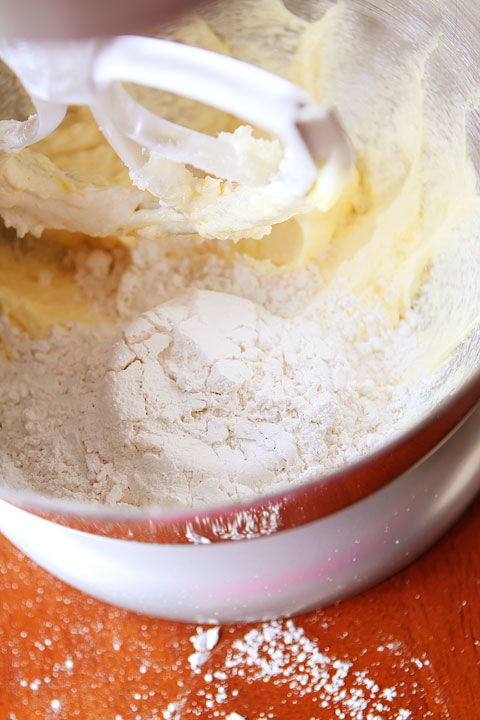 Next we’re going to alternate mixing in the milk with the dry ingredients. Start by adding a fourth of the flour mixture (a little less than a cup) to the bowl and mix on low speed until just combined. 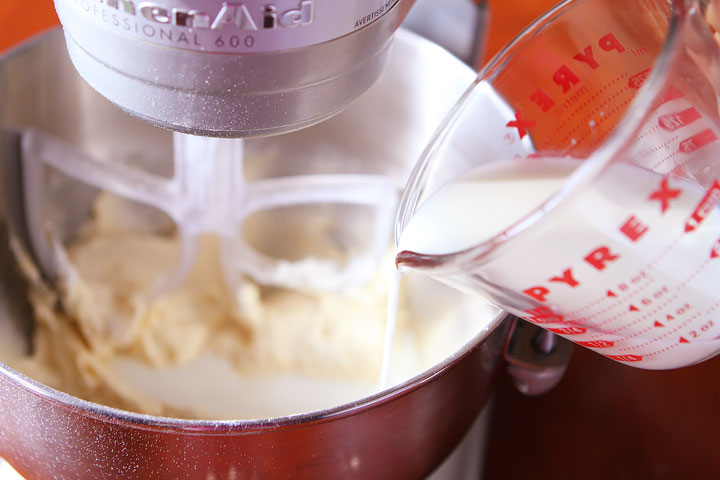 Then pour in a third of the milk and stir again, just until combined. Continue alternating mixing in the dry and wet ingredients, ending with the dry. 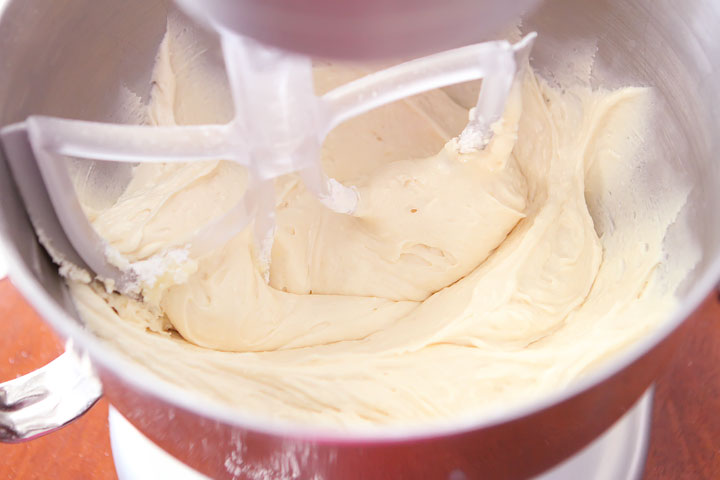 Mix until well combined and smooth, but be careful not to overmix. 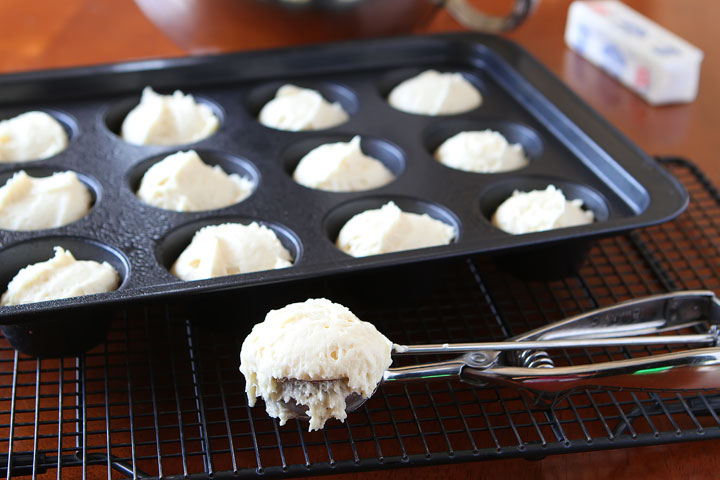 Since we’re not using liners for these muffins, be sure to spray the pan generously with cooking spray so they don’t stick. Scoop about 1.5 tablespoons of batter into each mini muffin tin. A medium cookie scoop works perfectly for this. Bake at 350 for 14-15 minutes, or until a toothpick comes out clean. 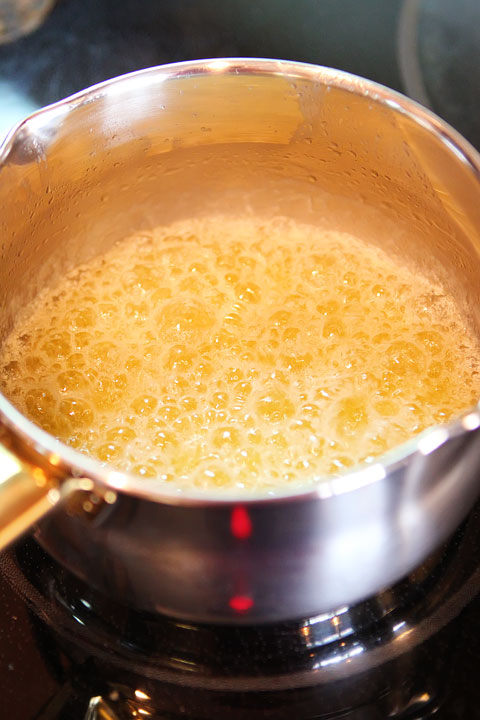 Now we’re going to send these bad boys over the top. When these perfect little muffins come out of the oven, they’re dunked in brown butter and rolled in cinnamon sugar for a delicious sugary crust. They’re ridiculous. Start by melting the butter over medium heat. Once it’s melted it will start to bubble. Whisk occasionally. 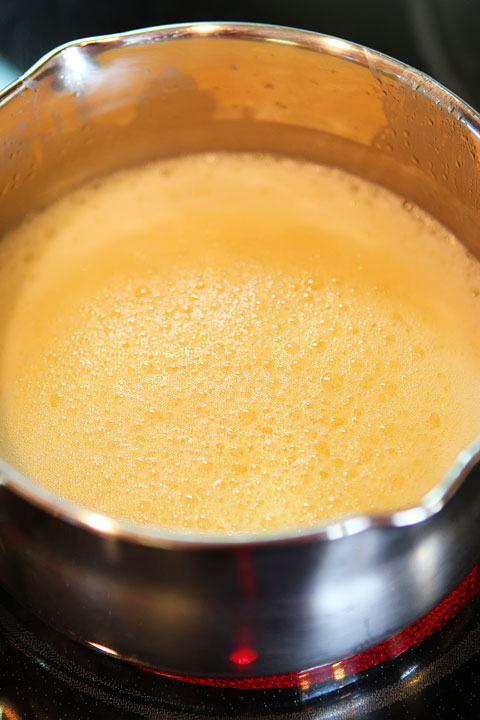 When the butter starts to foam, like this, start whisking constantly and whisk for 1-2 mins, until it turns brown and you see brown flecks on the bottom of the pan. 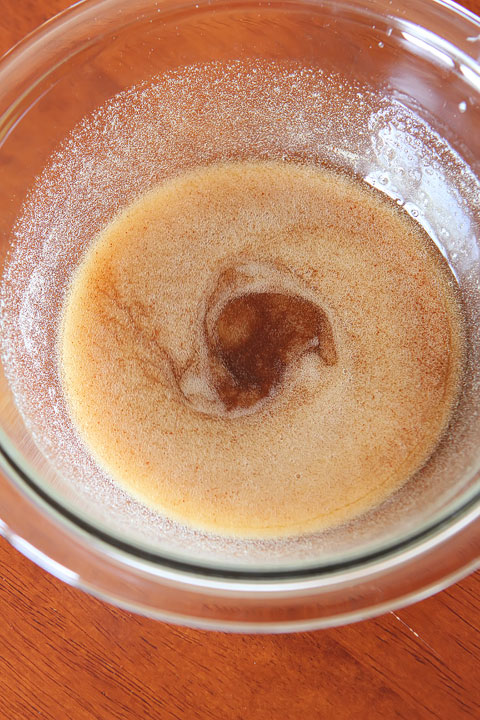 When it looks like this, immediately remove from heat and pour into a bowl for dunking. 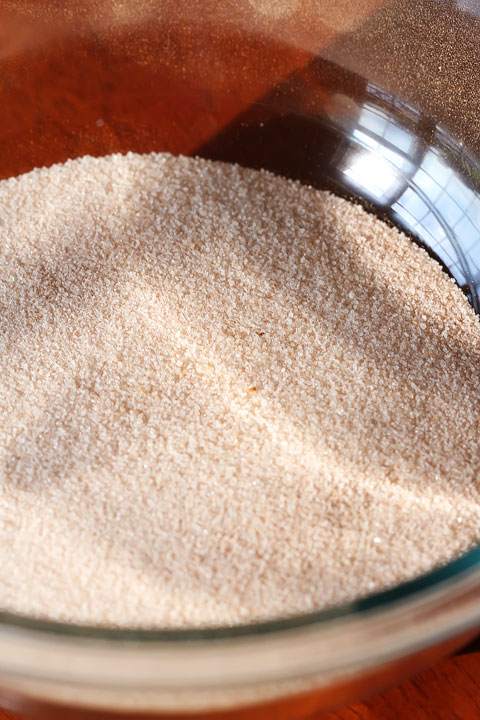 In a separate bowl, stir together one cup of sugar and one tablespoon of ground cinnamon. 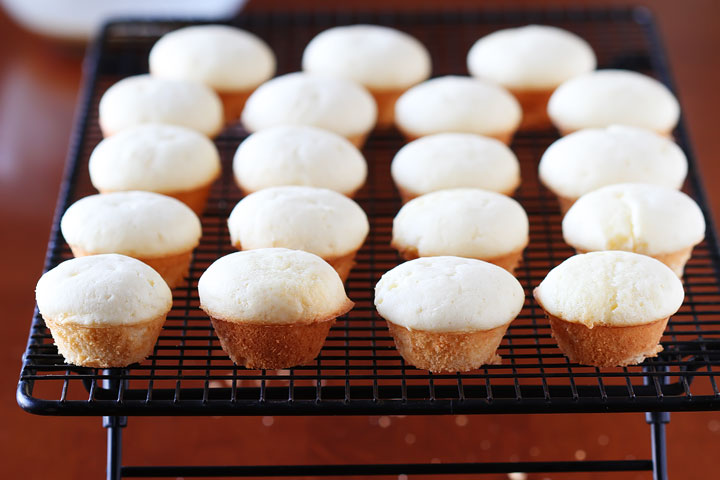 When the muffins are just cool enough to handle, remove them from the tin… 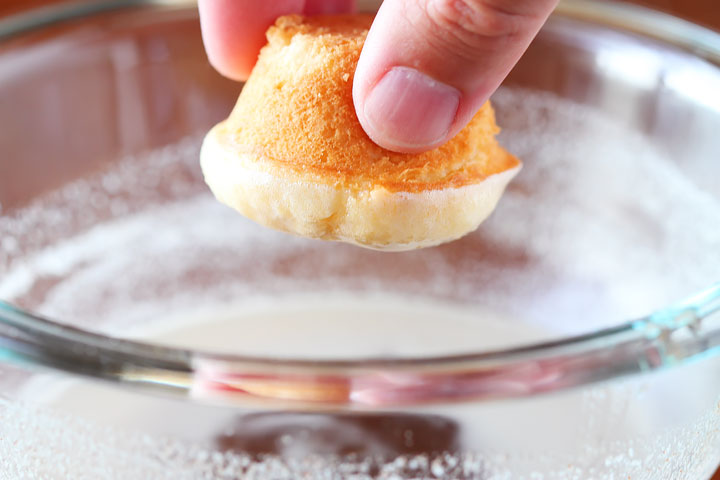 And dunk them in the brown butter, coating on all sides. Thank you Kevin for hand-modeling here. I think he has a real career at this! 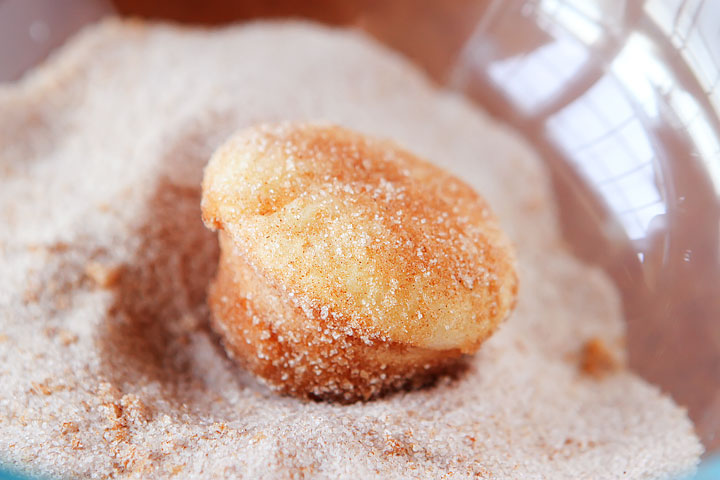 Finally, roll around to coat in cinnamon sugar. 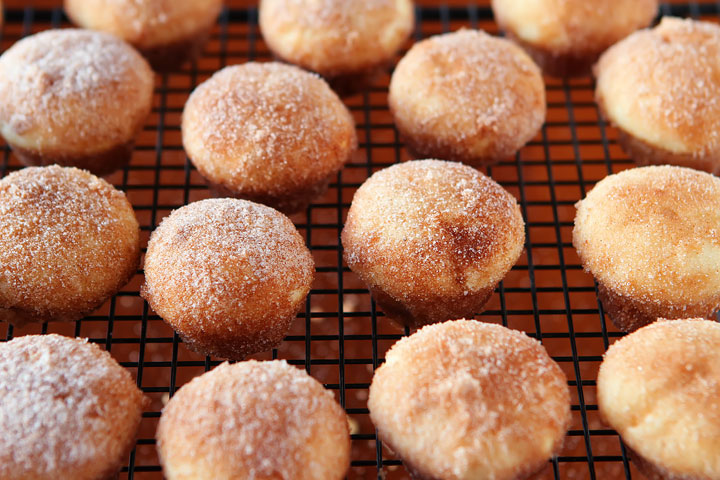 Seriously!! That sugary, crunchy crust paired with the pillowy, soft muffin is absolute perfection. Now, you could totally stop here and have a perfectly delicious dessert. 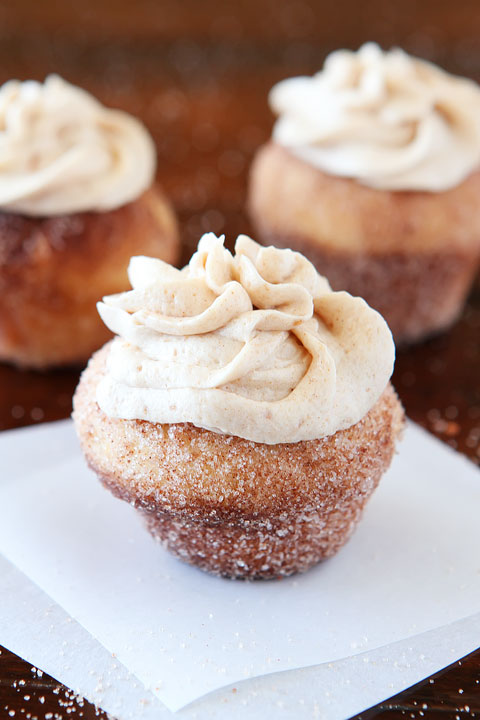 But you know we’re not gonna stop, right? I made a simple, brown butter buttercream frosting (recipe below) and piped it right on top. 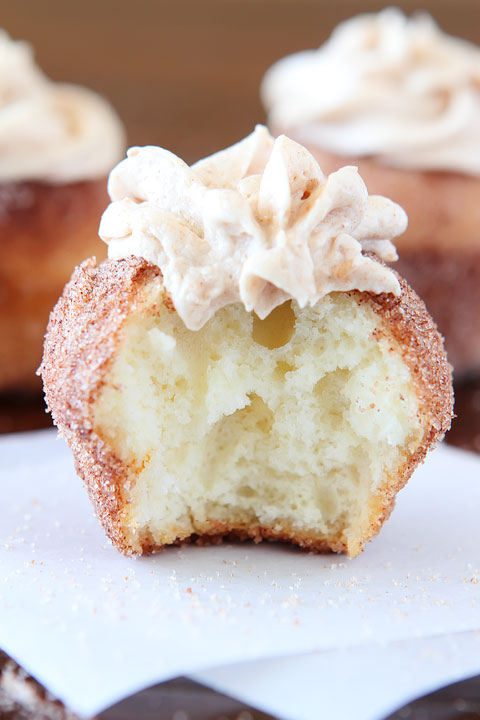 So much brown butter goodness in one tiny little treat!! These are ultra decadent and super dangerous, so get them out of your house ASAP or get ready to act super-shady while shoving them into your mouth and hiding in a corner, swatting at anyone who tries to come near and steal your Brown Butter Delights.

These Snickerdoodle Doughnut Muffins with Buttercream Frosting are so sweet and delicious! They’re snickerdoodle cookies in muffin form with frosting!

For the Doughnut Muffins

For the Brown Butter Buttercream Frosting 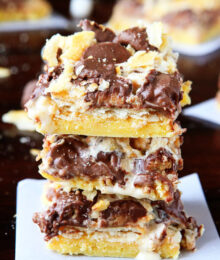 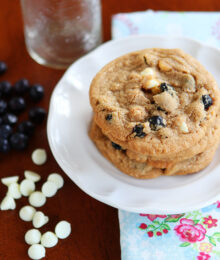 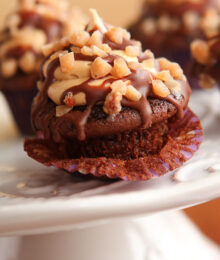