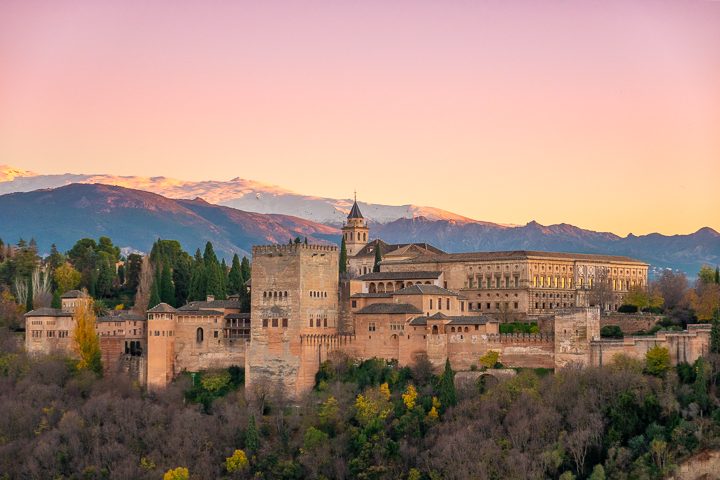 The Alhambra in Granada Spain is a massive palace and fortress complex, and certainly one of Spain’s most significant historical landmarks. It was once the Royal Court of Ferdinand and Isabella, and also the site where Christopher Columbus received approval for his expedition! 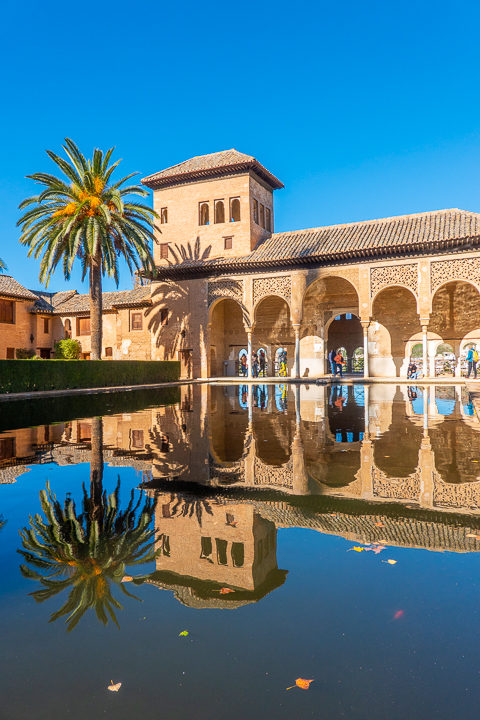 It started in the year 889, when a small fortress was constructed on the remains of former Roman ruins. 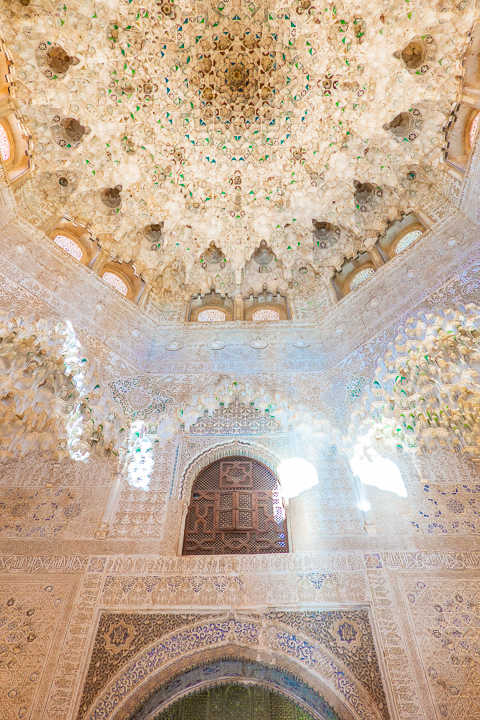 Over the next 500+ years, through the Middle Ages and Renaissance, different empires conquered this region. Each new ruler would expand the fortress, adding more fortifications and their own royal palaces in the architectural style of the time. 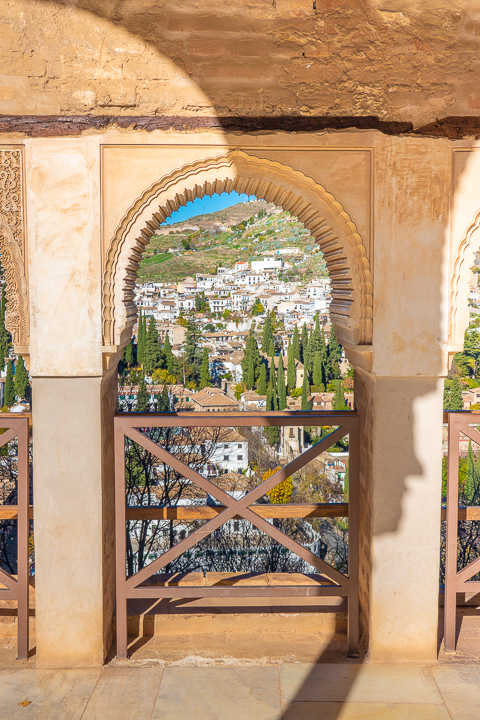 As a result, the Alhambra is now a combination of all these architectural styles all in one place.

There are 4 main areas of the Alhambra that you can visit: 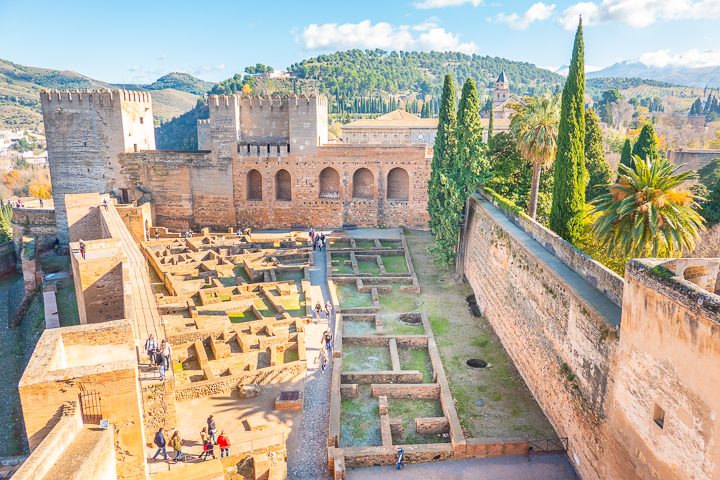 The oldest part of the Alhambra is the Alcazaba, which means fortress. There are three layers of fortification walls and several watchtowers that you can climb for a panoramic view of Granada. 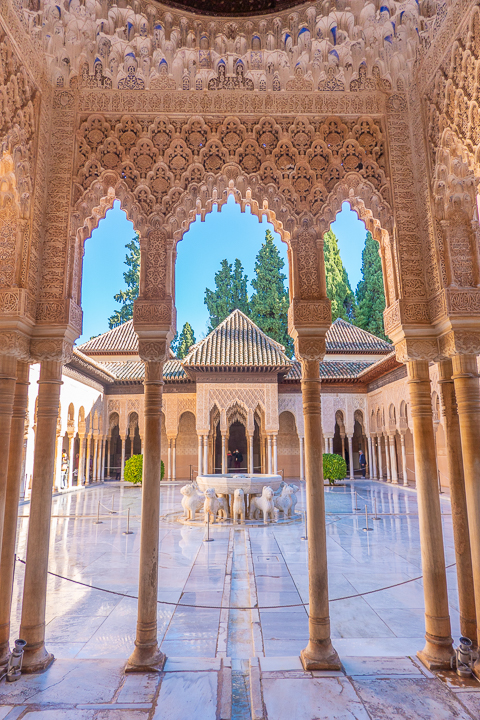 The Nasrid Palaces are a complex of multiple palaces that were built as residences for the royal families of Granada throughout the years. The first palace was constructed in the mid 1200s. 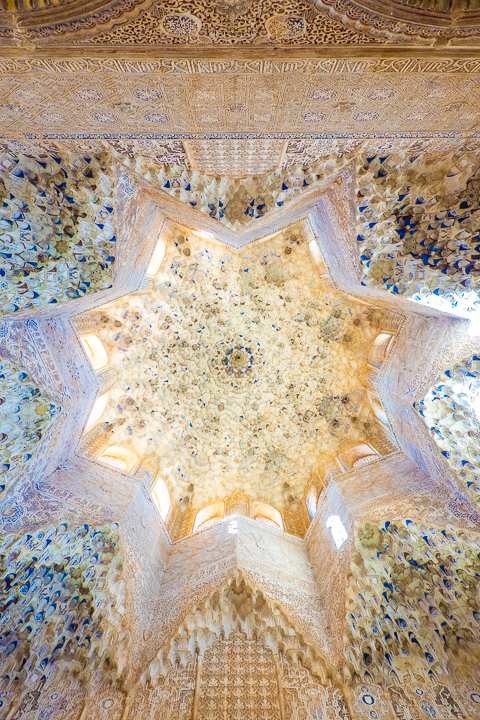 Inside the Nasrid Palaces you can see some of the best preserved and most well-known examples Islamic Moorish architecture in Spain. For example, look at this incredibly intricate honeycomb ceiling! 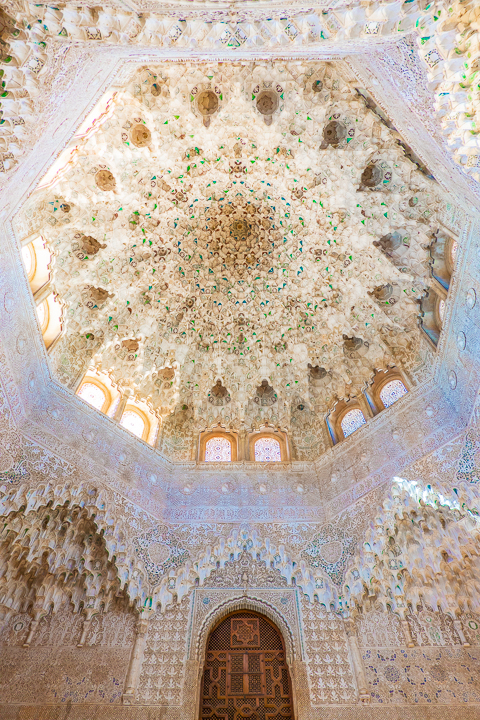 Be Sure To Buy Your Alhambra Tickets In Advance!

An Alhambra General Ticket includes entrance to all areas of the Alhambra, including the Nasrid Palaces, Alcazaba, Generalife, and Palace of Charles V. 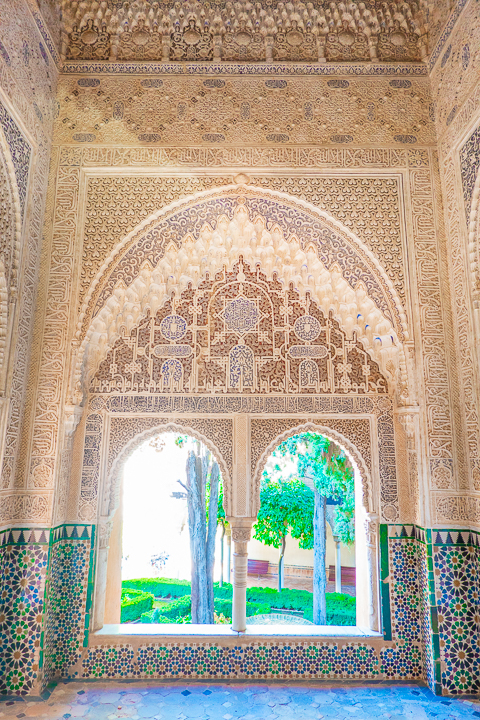 You can visit the Alhambra at any time, however you must choose an entrance time for the Nasrid Palaces. You must be in line for the Nasrid Palaces at your chosen time slot. There’s really no need to line up early, unless you want to be the very first inside the palace. But definitely be there right on time, or you won’t get in! 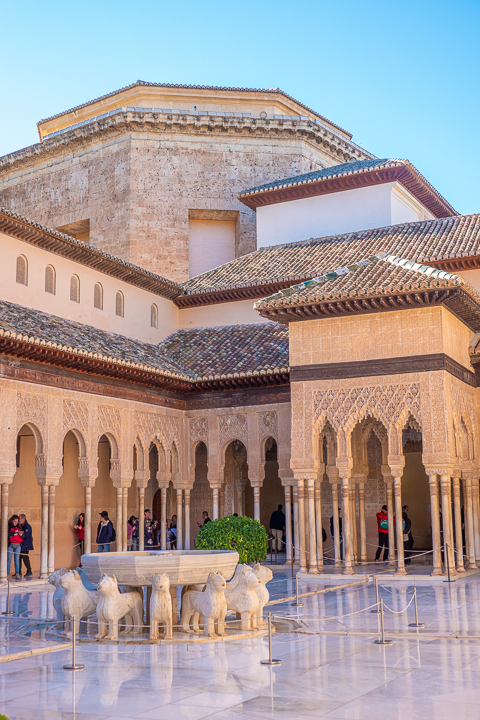 Time slots for the Nasrid Palaces during busy seasons (summer especially) sell out quickly, so be sure to buy your Alhambra tickets in advance as soon as you know when you’ll be in Granada!! 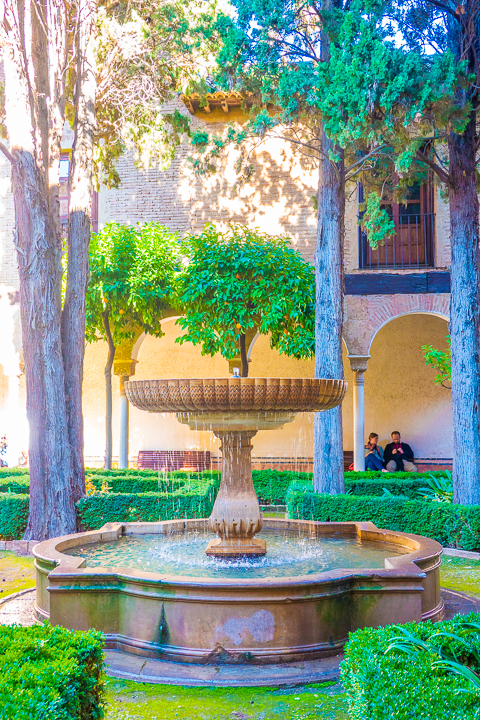 How Much Time To Visit Alhambra?

Plan for at least 3-4 hours, minimum. But you could easily spend longer there if you like to take your time. You may want to bring water and snacks, but you can also purchase them there. 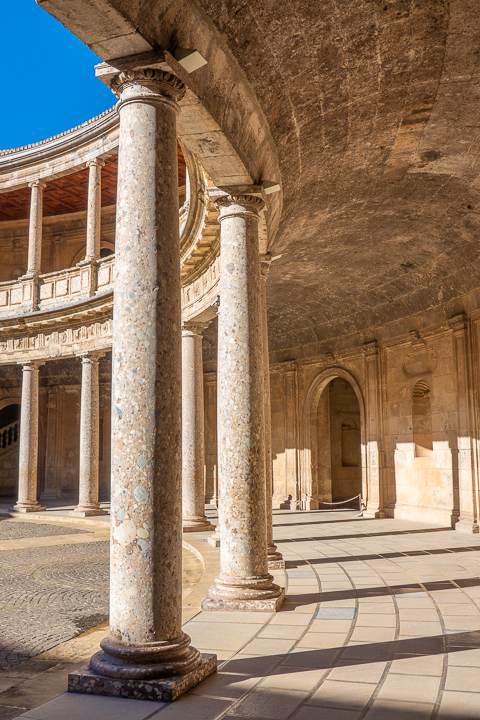 The Palace of Charles V is a Renaissance palace inside the Alhambra. It was commissioned in 1526 by the Holy Roman Emperor, Charles V, because he wanted to have a permanent residence closer to the Alhambra. 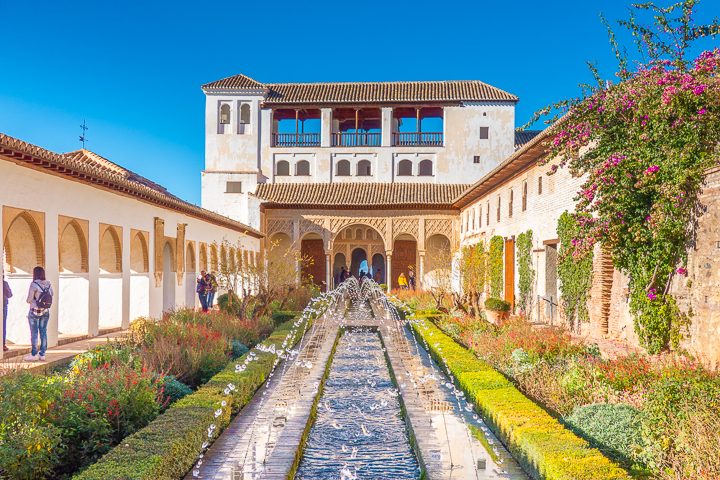 Generalife means Garden of the Architect. It is a series of large gardens and fruit orchards built in the 1200s. The royal family of Granada would spend their leisure time here when they wanted to get away from the Palace. 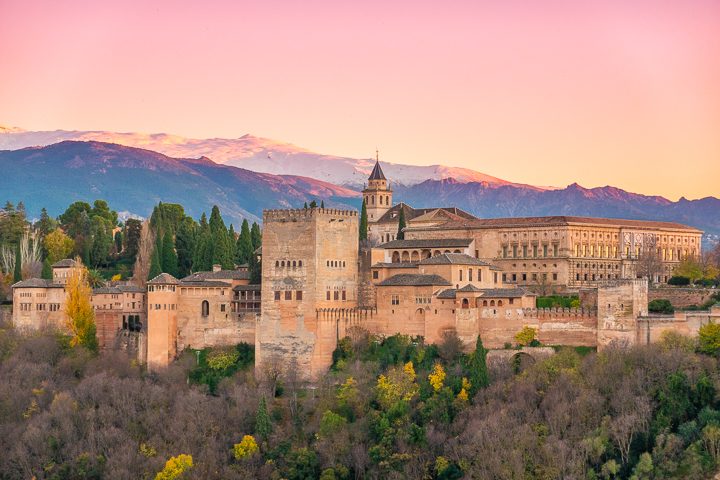 One of the things you must absolutely do in Granada Spain is watch the sunset from Mirador de San Nicolas!! 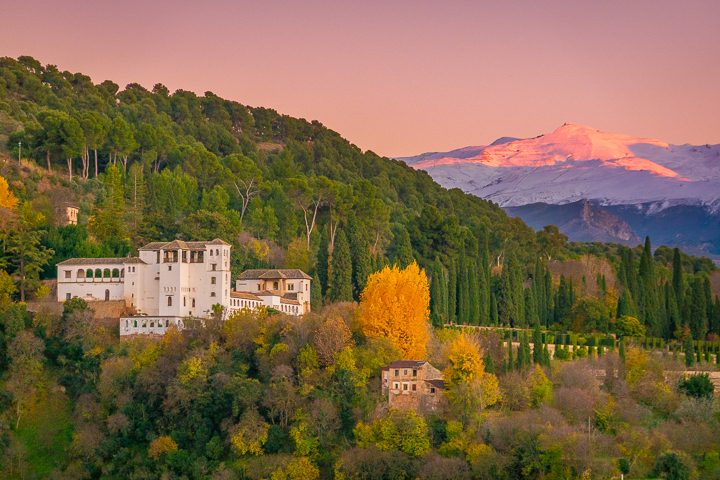 From up here you have the best view of the Alhambra and the city of Granada. The lighting at sunset as the Sierra Nevada mountains turn pink behind the Alhambra is breathtaking! 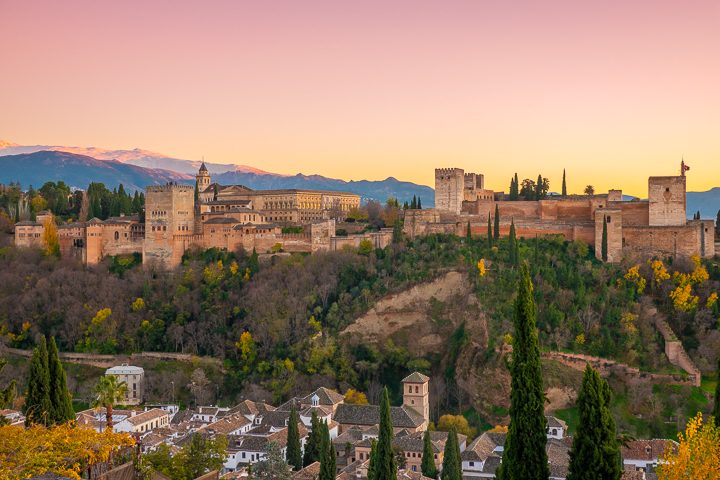 Alhambra means The Red One in Arabic, named after the color of the red clay which was used to build the fortress. 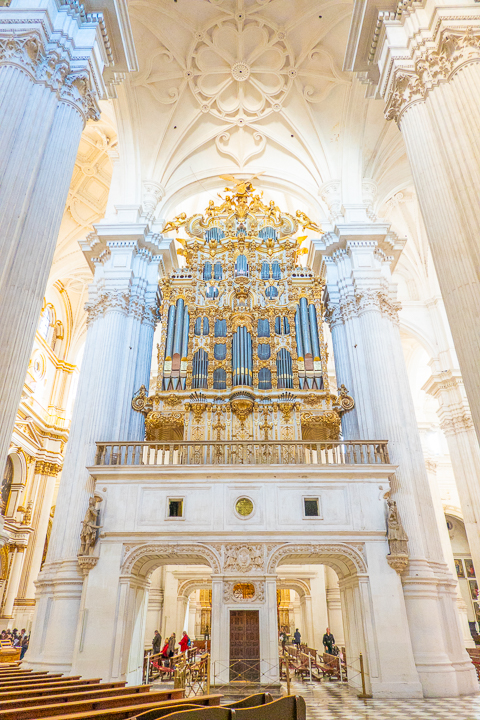 Granada Cathedral is a lavish cathedral with a brilliant white and gold interior. 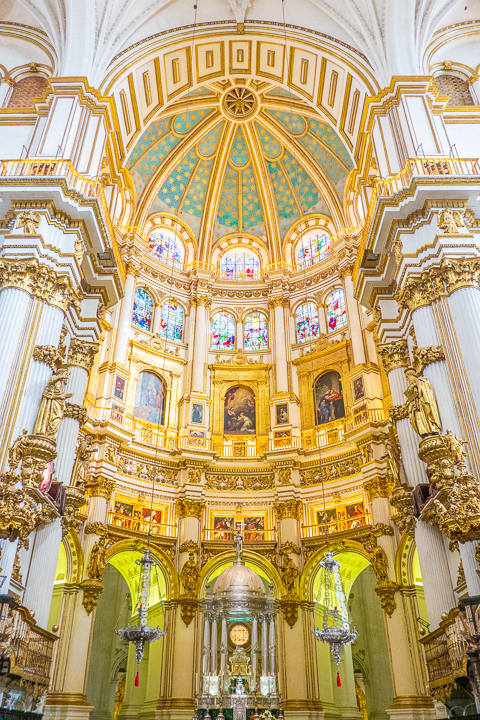 The cathedral is a stunning example of Spanish Renaissance style architecture. 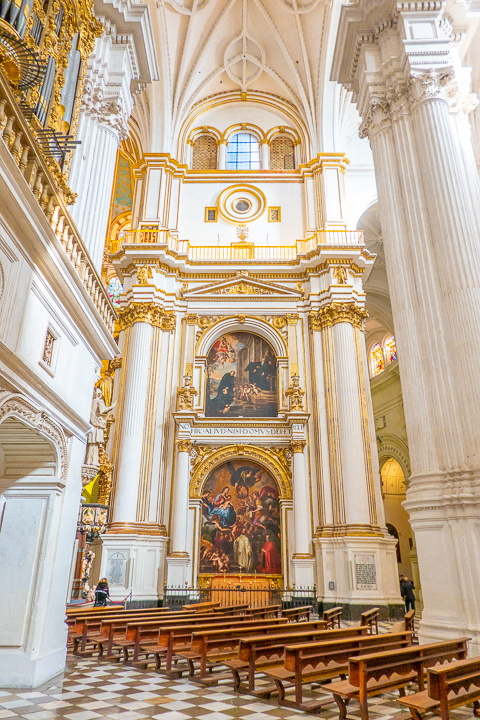 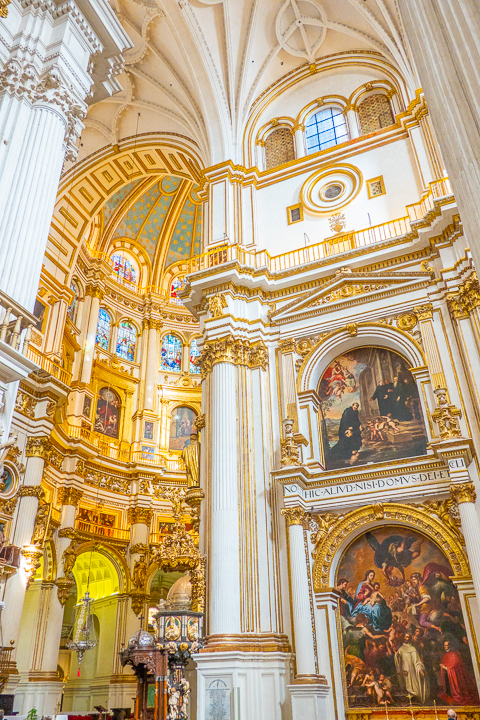 The Royal Chapel is where King Ferdinand and Queen Isabella are buried. There is also a small museum with a few items that once belonged to the King and Queen. 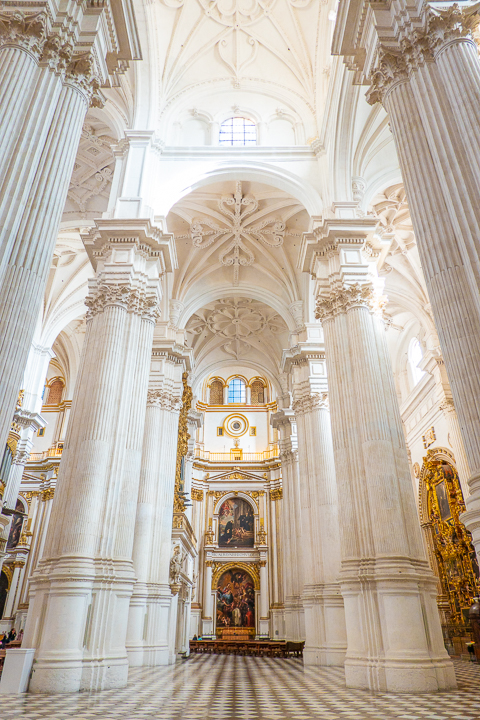 All the pictures you see here are from the Granada Cathedral. Unfortunately you cannot take pictures inside the Royal Chapel. 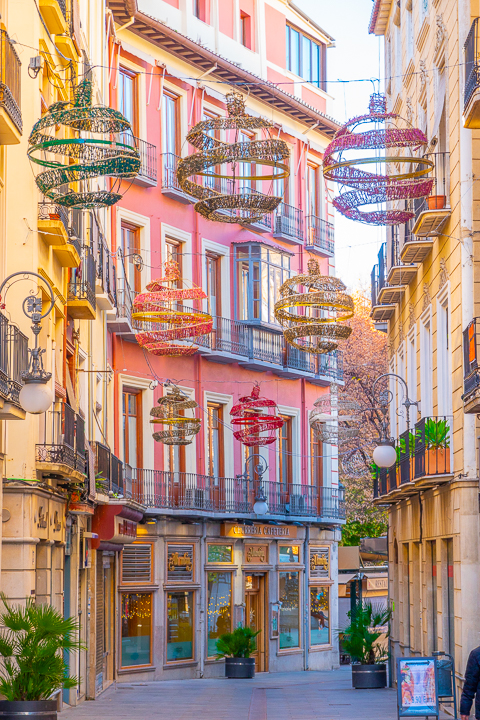 More To Do in Granada Spain

If you have more time, here are a few more popular things to do in Granada Spain that you may want to add to your list! 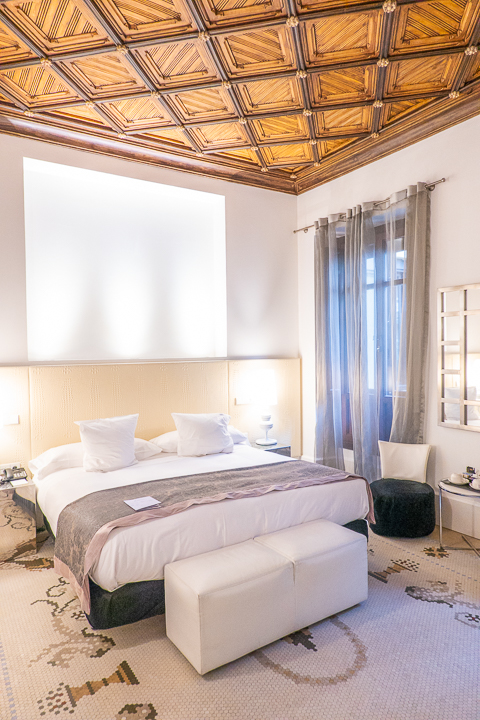 If you are looking for the best hotels in Granada Spain, I highly recommend the Hotel Hospes Palacio de Los Patos. The Hospes Palacio de los Patos is a private palace from the 1800s. It still has many original elements such as the tiled floors and wooden ceilings. The marble staircase in the entrance of the hotel was imported from Italy. 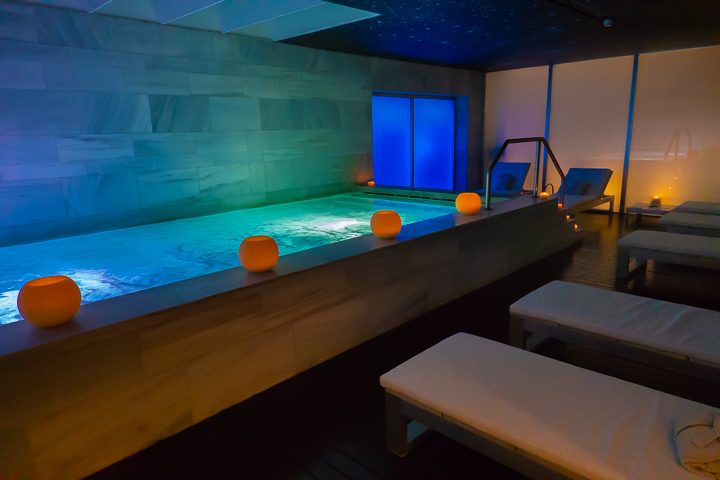 After a long day of walking all over the Alhambra, it was so nice to be able to relax in the spa and sauna. Even if you are not a guest of the hotel, you can still visit the spa. 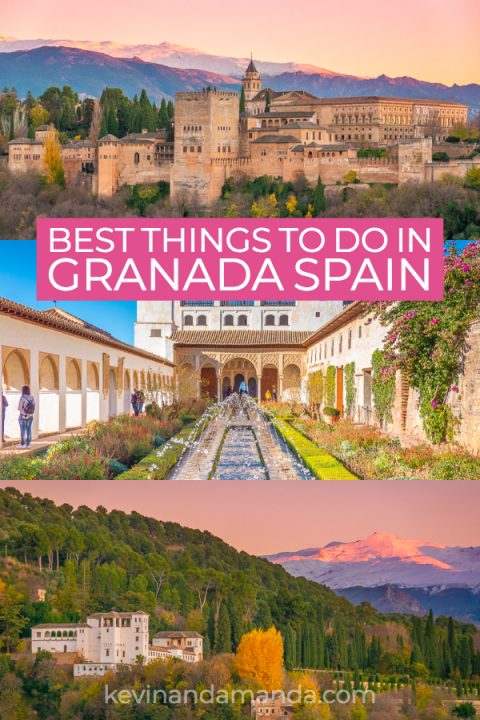 Your Thoughts on Granada Spain?

If you’ve been to Granada: Did I miss the best thing to do in Granada? Do you have any other tips to share?

If you haven’t been toGranada: Does this post make you want to go?? :)

Let me know in the comments! 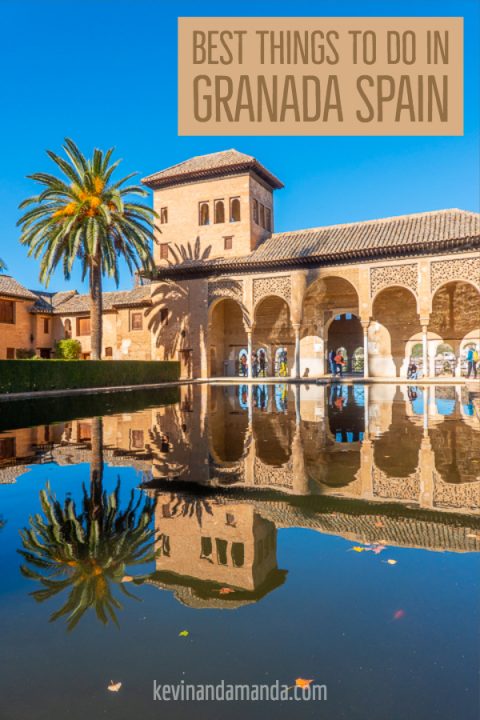 Planning a trip to Spain? Click here to see more of our posts from Spain!