What Settings Should I Use? 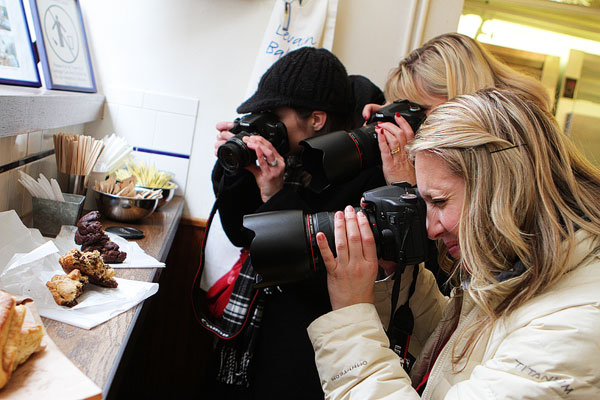 I recently added a feature to this blog where you can click on a photo and see the settings I used to shoot that photo. I’m thrilled to be able to easily share this information, but I also wanted to let you guys in on two very important secrets.

1. I don’t always use the right settings.

I make mistakes. Often! Or I get lucky. Sometimes I forget to change settings from photo to photo. Sometimes I quickly point and shoot. Either way, my settings are by no means perfect, and sometimes I cringe at the thought that someone might attempt to take a similar photo using those settings. Ack!

2. Your mileage may vary.

With that in mind, I wanted to share with you guys how you can look at a photo and replicate it. Not by knowing which exact settings were used, but which setting was the most important for that photo. Once you’ve got that one setting in place, you simply adjust the other settings to make sure the photo looks good. It doesn’t really matter what the exact numbers are. Just that they made the photo bright enough. Or sharp enough.

So how can you look at a photo and know which setting was the most important, without knowing any of the settings? In most photos you take, either the aperture or the shutter speed will be the most important setting. That’s why most cameras have Aperture Priority and Shutter Speed Priority shooting modes. But here’s the thing. It all depends what you, the viewer and the photographer, want to get out of the photo. Is it a portrait? Do you want a beautifully blurred background? Is it a scenery shot? Do you want everything sharp and in focus? Is it an action shot? Do you need to be able to “freeze” action in the photo?

I’ve rounded up a few of my favorite types of photos to shoot, the ones you’re most likely to see around here. Below I’ll show you which setting was the most important for each one and walk you through my thought process for taking the photo. (Careful! My mind’s a scary place.) So that next time, even though you might not use the exact same settings, you’ll still be able to take a photo and get exactly what you want out of it. 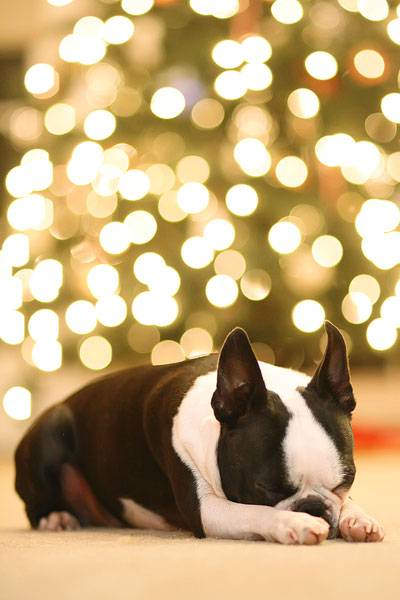 What did I want out of this photo? Bokeh. I wanted the lights on the Christmas tree blurred in the background. So for this photo, the most important setting was aperture. I put the camera in Manual and set the aperture as low as it would go, 1.8. To replicate this photo, start by setting your aperture as low as it will go, then bump down the shutter speed – this will allow your camera to let in more light – until the photo is bright enough for your liking.

Tip: Make sure your shutter speed doesn’t get too much below 50 (it’s 40 here). If it does, your photo might suffer from blurriness caused by camera shake. If you’ve bumped it down to 50 and your photo isn’t bright enough, tried bumping up your ISO to allow in more light.

For a quick review of aperture, shutter speed, exposure, and ISO, check out part one of this tutorial: A Quick Guide to Understanding Your DSLR Camera. 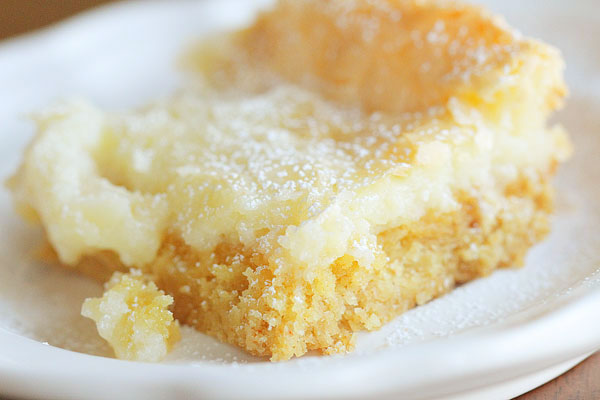 What did I want out of this photo? Bokeh, again. But this time, bumping the aperture all the way down to 2.8 (as low as this lens will go) was too much bokeh. Try bumping up your aperture to 3.2, 4.0 or even 5.6 to see how it changes the look of your photo. Here’s a good example of the difference it can make: A Quick Comparison of Aperture & Bokeh.

For this photo, I had plenty of light, so I just put my camera in Aperture Priority mode and shot. I didn’t need to manually fiddle with the shutter speed and and ISO to allow in more light. I did, however, bump my exposure control up to +2/3 to make it nice and bright. Again, check the DSLR Quick Guide for a review on that.

Tip: If your camera has Auto ISO mode, use it! 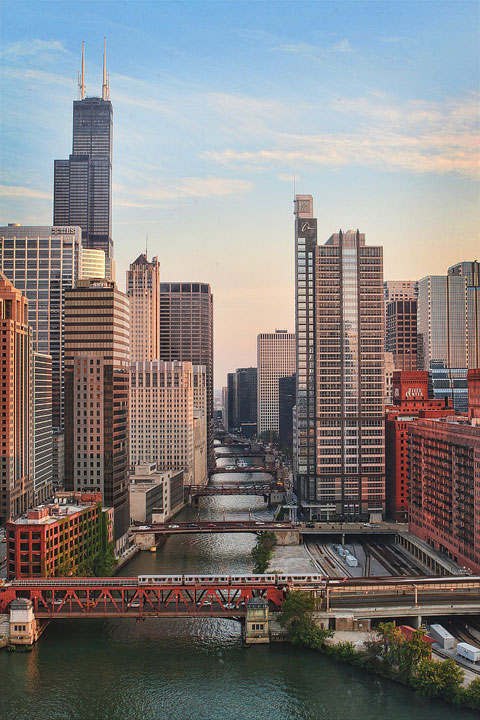 Again, aperture is the most important setting in this photo. What I wanted out of this photo was for everything to be in focus. If you want everything in focus for a scenery shot, try setting your aperture between 8 and 11. This will cause your camera to allow in less light, making your photo darker, so you may need to lower your shutter speed to compensate. In this case, I had to lower it to 32 and use a tripod so my hands wouldn’t shake and cause the photo to be blurry.

Tip: A low ISO is always preferred for scenery photos, as a higher ISO can cause them to be grainy. In this case, I could’ve bumped up my ISO which would have allowed me to set my shutter speed fast enough to to hand hold the camera, but I preferred to keep my ISO low at 125 and use a tripod. 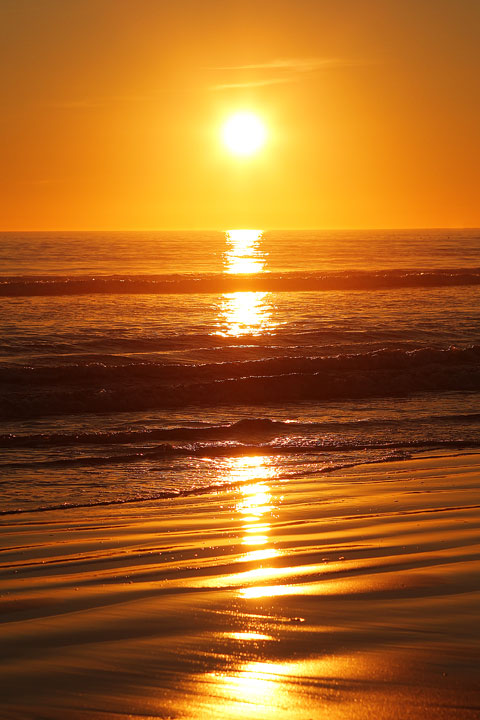 Believe it or not, for this photo, aperture was the most important setting. I wanted to make sure to get the beach and the horizon in focus. I put my camera in Aperture Priority and set my aperture to 8. From there, you can play with the exposure control to adjust the lighting. At 0, you’ll get a darker sunset, like the photo above. If you bump it up a few stops, you’ll get a brighter sunset, like this: 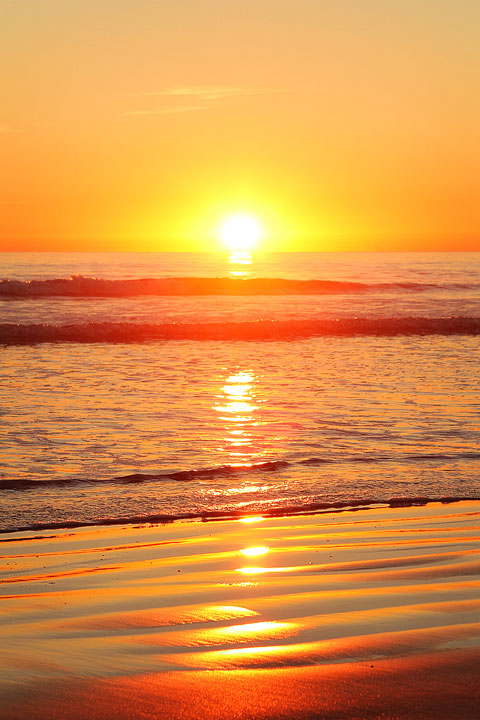 As you can see, all it did was lower my shutter speed to allow in more light.

Which one do you prefer? 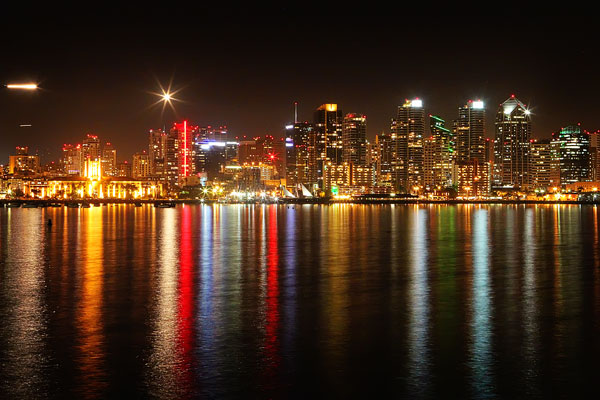 One more aperture photo here. For this nighttime photo that has a ton of detail, I set my aperture as high as it will go, 22. I wanted to make sure I could get every last detail in focus. Because it was so dark, and my aperture was so high (allowing in the least amount of light as possible) I had to set my shutter speed extremely low, 6 seconds. That means you press the button, and six seconds later it’s done taking the photo. I definitely used a tripod for this shot. I also used the self-timer, so my hand wouldn’t shake the camera as I was pushing the button.

Remember what I said about not always having perfect settings? Can you see which setting I messed up on here? ISO. I should’ve lowered my ISO. My photo turned out a little grainy because I left it all the way up at 3200. However, if I’d remembered to lower it I would’ve had to set my shutter speed even slower. Who knows how long it wouldn’t taken to take the photo!

Fortunately, noise is pretty easily cleaned up in Photoshop using a plugin like DeNoise. 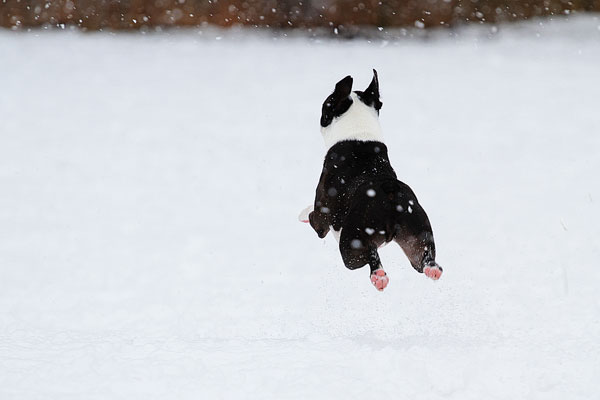 When you want to stop action in mid-air, shutter speed is your most important setting. For crisp action shots, I like to set my shutter speed no lower than 500. Any lower than that and you’re going to get blurriness. For this photo, I put my camera in Shutter Priority, set my shutter speed to 1/500, and since it was cloudy, I bumped my exposure control up to +1. This is my favorite setup for action shots. If it were sunny and the photos were turning out too bright, I would’ve put the exposure control back down at 0. 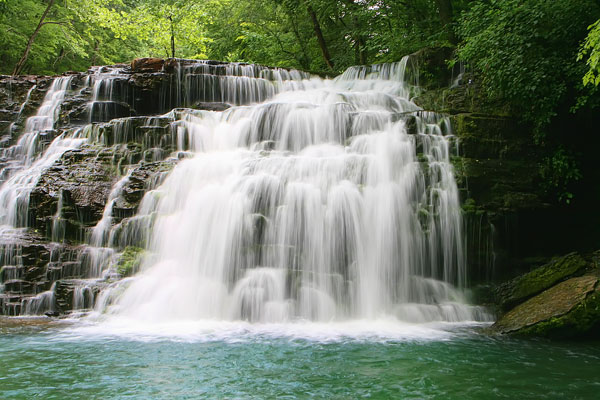 This is my go-to setup for dreamy waterfall photos. The shutter speed is the most important setting here. It needs to be at least 1/4 sec or slower to blur the flow of the water. I usually shoot waterfalls in manual mode, and here’s why. Setting the shutter speed that slow allows in a lot of light. And since I’m usually taking photos of waterfalls during the day, when there’s sun, I have to bump up the aperture as high as it will go to compensate. My aperture is not up that high because I want everything in focus, although it is a nice bonus. It’s up that high because if it were any lower, like 2.8 or even 8 or 11, the photo would be completely white and blown out from too much light. My ISO is at 100 because while I do always prefer a low ISO for scenery, if it were any higher, again, it would allow in too much light and cause the photo to be too bright. 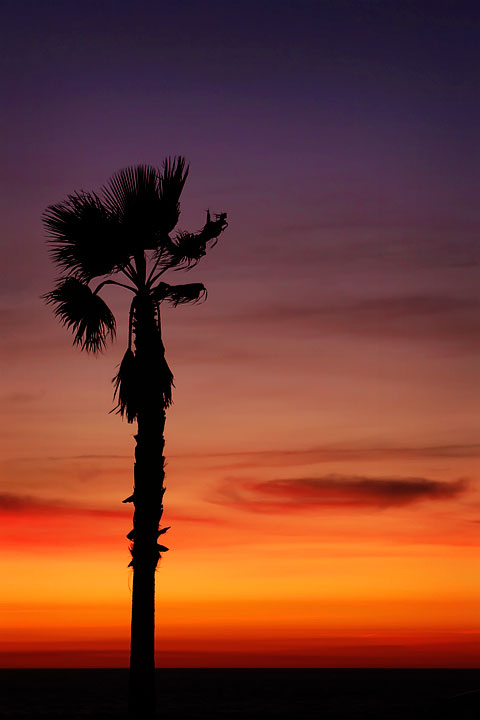 Sometimes it’s not what your settings are, but simply where you point the camera. For silhouette photos, point your camera at the brightest part of the sky. Press the shutter button halfway down to “get a light reading”. This will tell your camera that you’re taking a picture of the bright sky, and to adjust the settings accordingly. With the shutter button still pressed halfway down, reframe the photo so that the subject you want to silhouette is in the viewfinder and take the picture. If you can still see too much detail in your subject, bump down your exposure control to get a darker image and try again.

Check out my settings here. Ideally, I would’ve used a higher aperture, in the 8-11 range, to ensure that both the palm tree and the horizon were in focus. I forgot. However, doing that would’ve allowed in less light. I would’ve had to bump up my ISO to compensate, and that might have caused graininess in the photo. Something to think about.

Fortunately, everything’s in focus here. Tip: If your subject is out of focus, check your aperture and consider using a higher one. Bokeh, when you didn’t mean for it to be there, is just plain blurriness. 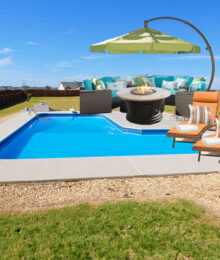 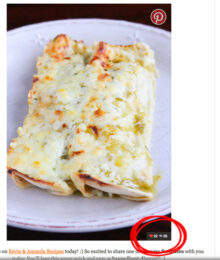 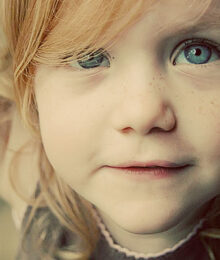 How I Edit My Photos